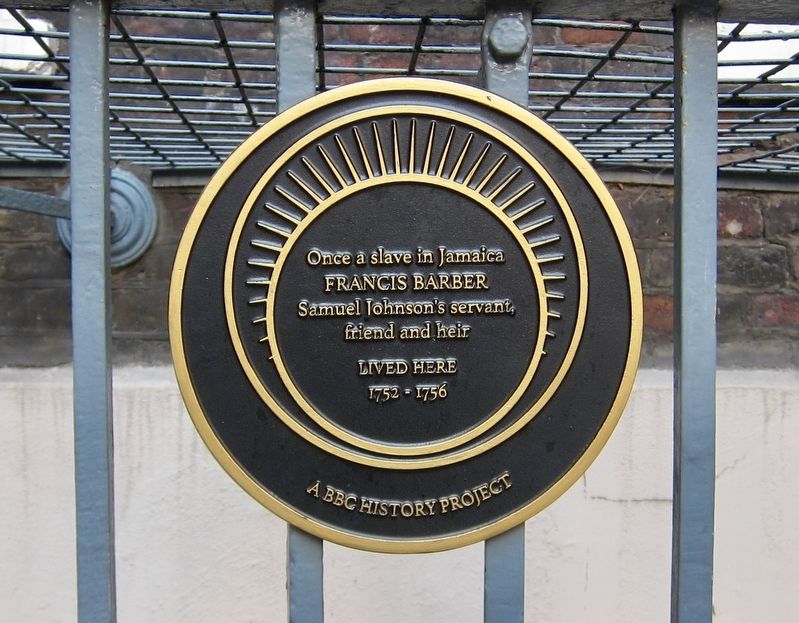 By Andrew Ruppenstein, October 15, 2017
1. Francis Barber Marker
Inscription.
Francis Barber. A BBC History Project.
Once a slave in Jamaica Francis Barber Samuel Johnson's servant, friend and heir Lived Here 1752-1756. . This historical marker was erected in 2016 by The BBC. It is in City of London England United Kingdom

Once a slave in Jamaica
Francis Barber
Samuel Johnson's servant,
friend and heir 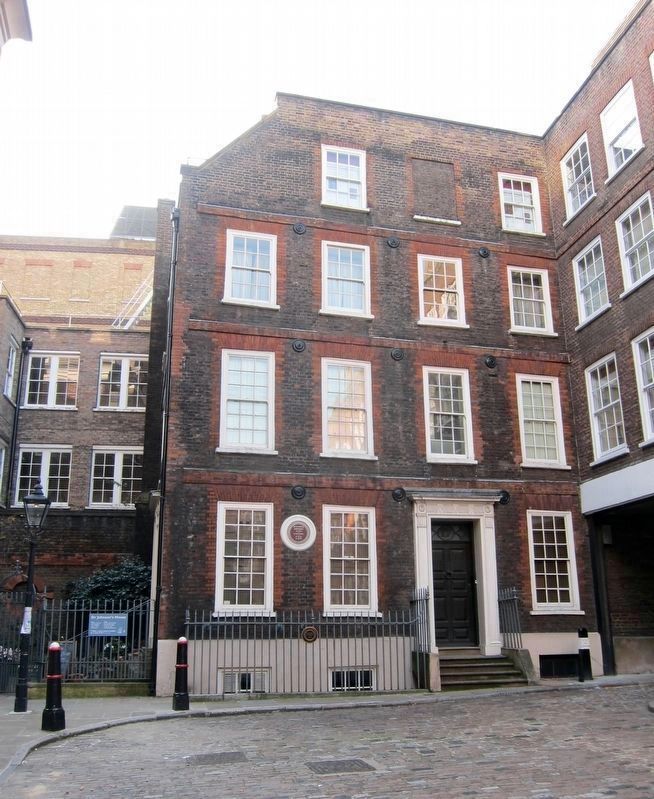 By Andrew Ruppenstein, October 15, 2017
2. Francis Barber Marker - Wide View
The Francis Barber Marker is visible here mounted to the fence in front of Dr.Samuel Johnson's house, with the Royal Society of Arts Marker for Dr. Johnson visible behind it, mounted on the house.
. "Francis Barber (c. 1742/3 – 13 January 1801), born Quashey, was the Jamaican manservant of Samuel Johnson in London from 1752 until Johnson's death. Johnson made him his residual heir, with £70 a year to be given him by Trustees, expressing the wish that he move from London to Lichfield, in Staffordshire, Johnson's native city. After Johnson's death, Barber did this, opening a draper's shop and marrying a local woman. Barber was also bequeathed Johnson's books and papers, and a gold watch. In later years he had acted as Johnson's assistant in revising his famous Dictionary of the English Language and other works. Barber was also an important source for Boswell concerning Johnson's life in the years before Boswell himself knew Johnson." (Submitted on December 9, 2017.)

2. Black roots: Francis Barber (BBC). "Johnson's views on slavery were well documented. On one occasion he famously made a toast to the "next insurrection of the negroes in the West Indies". However, that is not to say he viewed Barber as an equal. When he appealed to Sir George Hay in the Admiralty to secure Barber's release from HMS Stag, he described Barber as "given to him". He took it upon himself to remove Barber form a career path he had chosen, evidently believing that he, Johnson, had his best interests at heart....Johnson's will is the strongest evidence of his attachment to and respect of Barber. When one of Johnson's acquaintances and later his biographer, Sir John Hawkins, told Johnson that £50 per annum was a generous sum to leave a faithful servant, Johnson replied by saying he was leaving Barber £70 a year. His generous annuity of £70 was in addition to the charge of his books and papers. The high regard with which Johnson treated Barber infuriated many of his contemporaries. " (Submitted on December 9, 2017.)
Credits. This page was last revised on January 2, 2020. It was originally submitted on December 9, 2017, by Andrew Ruppenstein of Sacramento, California. This page has been viewed 141 times since then and 10 times this year. Photos:   1, 2. submitted on December 9, 2017, by Andrew Ruppenstein of Sacramento, California.
Share This Page.