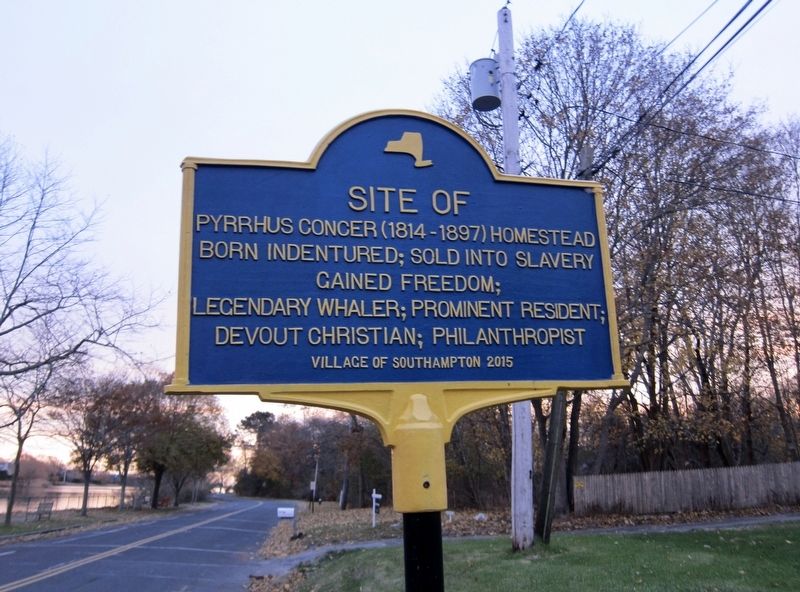 Erected 2015 by Village of Southampton. 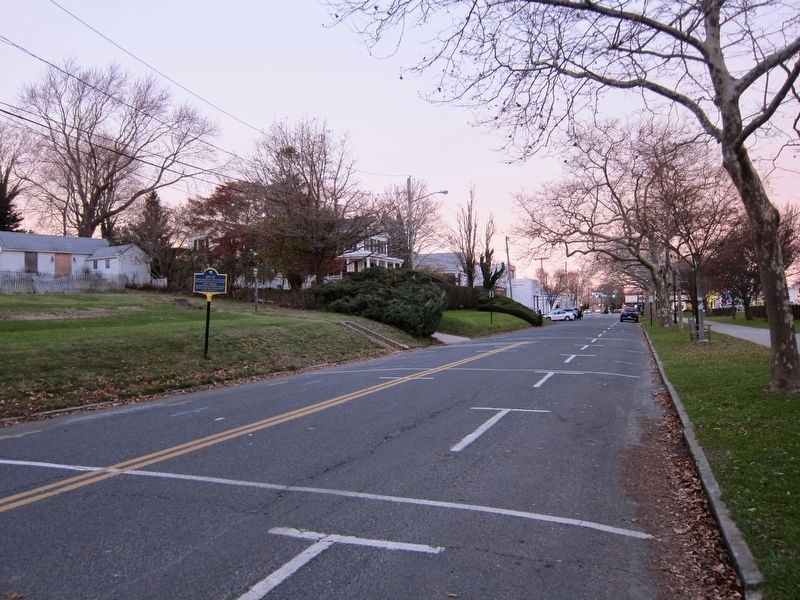 By Andrew Ruppenstein, November 26, 2017
2. Pyrrhus Concer Marker - Wide View
(approx. half a mile away); First Watermill (approx. 2.7 miles away); The James Corwith Grist Mill (approx. 2.8 miles away). Touch for a list and map of all markers in Southampton.

Also see . . .
1. Pyrrhus Concer (Wikipedia). "Pyrrhus Concer (March 17, 1814 – August 23, 1897) was a former slave from Southampton, New York who was aboard the ship the Manhattan that was the first American ship to visit Tokyo in 1845....Concer belonged to the Pyrrhus family and worked as a farmhand until 1832 (slavery in New York formally ended in 1827) when he worked on whaleships out of Sag Harbor, New York....In 1845 he was aboard the ship captained by Mercator Cooper that picked up shipwrecked Japanese sailors in the Bonin Islands. The American boat was allowed to enter Tokyo Harbor under escort to return the sailors and Concer became an object of curiosity and is depicted in Japanese drawings of the event." (Submitted on December 11, 2017.)

2. Pyrrhus Concer Was Born a Slave but Made History (Southampton Patch, Mary Cummings, 2/11/11). "If among all the others Concer became something of a celebrity, at least locally, it is because he was on board and played a role when the whale ship Manhattan, captained by Mercator Cooper of Southampton, made history in 1848. At the time, foreigners were forbidden to enter Japan but Captain Cooper, after rescuing the crews of two shipwrecked Japanese vessels, was determined to return them to their country.... In his later years, Concer delighted listeners with his narrative of that incident, describing how the initial hostility of the Japanese softened until in the end the crew and officers of the Manhattan were feted and given gifts before being sent on their way. The Japanese, who had never before seen a black man, marveled at our man Concer. As Arthur P. Davis relates in his booklet, "A Black Diamond in the Queen's Tiara," one after another, they would try "to rub off the black of his skin, stare at his marvelous perfect white teeth and listen to him speak." The voyage not only offered a first glimpse of a reclusive land but earned good will for America, easing the way for Commodore Perry's breakthrough eight years later." (Submitted on December 11, 2017.)