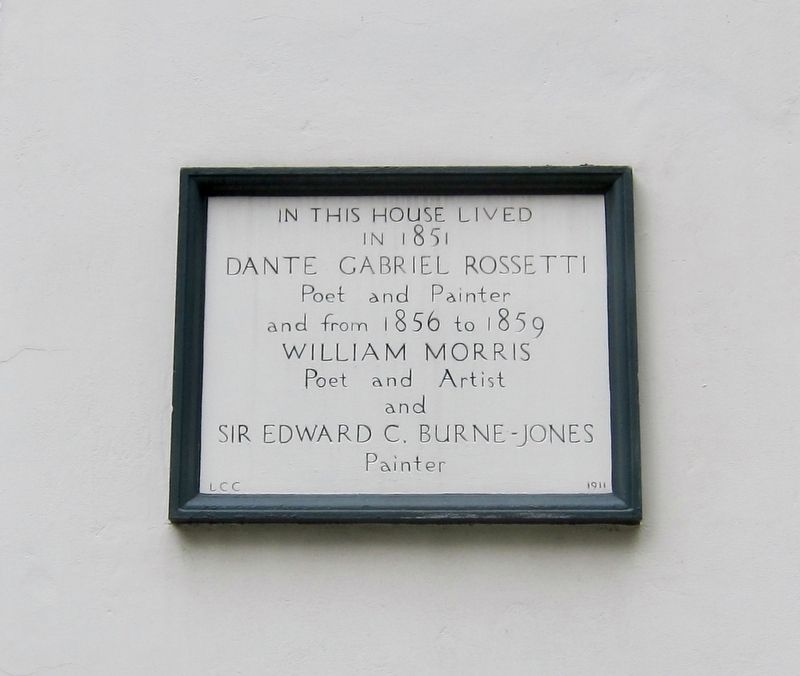 By Andrew Ruppenstein, October 15, 2017
1. Rosetti, Morris, and Burne-Jones Marker
Inscription.
Rosetti, Morris, and Burne-Jones. .
In this house lived in 1851 Dante Gabriel Rossetti Poet and Painter and from 1856 to 1859 William Morris Poet and Artist and Sir Edward C. Burne-Jones Painter. . This historical marker was erected in 1911 by London County Council. It is in London Borough of Camden in Greater London County England United Kingdom

In this house lived
in 1851
Dante Gabriel Rossetti
Poet and Painter
and from 1856 to 1859
William Morris
Poet and Artist
and
Sir Edward C. Burne-Jones
Painter 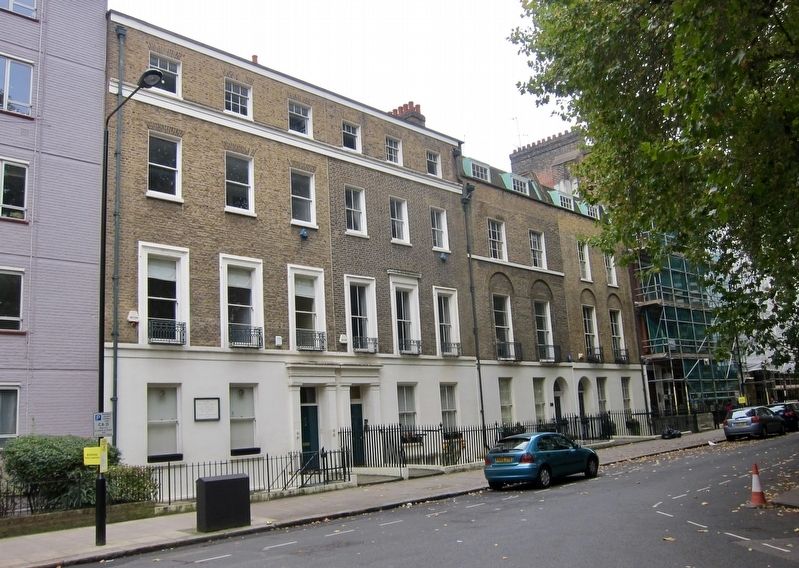 Also see . . .
1. Dante Gabriel Rossetti (Wikipedia). "Gabriel Charles Dante Rossetti (12 May 1828 – 9 April 1882), generally known as Dante Gabriel Rossetti was a British poet, illustrator, painter and translator. He founded the Pre-Raphaelite Brotherhood in 1848 with William Holman Hunt and John Everett Millais. Rossetti was later to be the main inspiration for a second generation of artists and writers influenced by the movement, most notably William Morris and Edward Burne-Jones. His work also influenced the European Symbolists and was a major precursor of the Aesthetic movement." (Submitted on December 11, 2017.)

2. William Morris (Wikipedia). "William Morris (24 March 1834 – 3 October 1896) was an English textile designer, poet, novelist, translator, and socialist activist. Associated with the British Arts and Crafts Movement, he was a major contributor to the revival of traditional British textile arts and methods of production. His literary contributions helped to establish the modern fantasy genre, while he played a significant role in propagating the early socialist movement in Britain." (Submitted on December 11, 2017.)

3. Edward Burne-Jones (Wikipedia). "Sir Edward Coley Burne-Jones, 1st Baronet ARA (28 August 1833 – 17 June 1898) was a British artist and designer closely associated with the later phase of the Pre-Raphaelite movement, who worked closely with William Morris on a wide range of decorative arts as a founding partner in Morris, Marshall, Faulkner & Co. Burne-Jones was closely involved in the rejuvenation of the tradition of stained glass art in Britain;...Burne-Jones's early paintings show the heavy inspiration of Dante Gabriel Rossetti, but by the 1860s Burne-Jones was discovering his own artistic "voice". In 1877, he was persuaded to show eight oil paintings at the Grosvenor Gallery (a new rival to the Royal Academy). These included The Beguiling of Merlin. The timing was right, and he was taken up as a herald and star of the new Aesthetic Movement....In addition to painting and stained glass, Burne-Jones worked in a variety of crafts; including designing ceramic tiles, jewellery, tapestries, mosaics and book illustration, most famously designing woodcuts for the Kelmscott Press's Chaucer in 1896." (Submitted on December 11, 2017.)
Credits. This page was last revised on December 11, 2017. It was originally submitted on December 11, 2017, by Andrew Ruppenstein of Sacramento, California. This page has been viewed 247 times since then and 23 times this year. Photos:   1, 2. submitted on December 11, 2017, by Andrew Ruppenstein of Sacramento, California.
Share This Page.