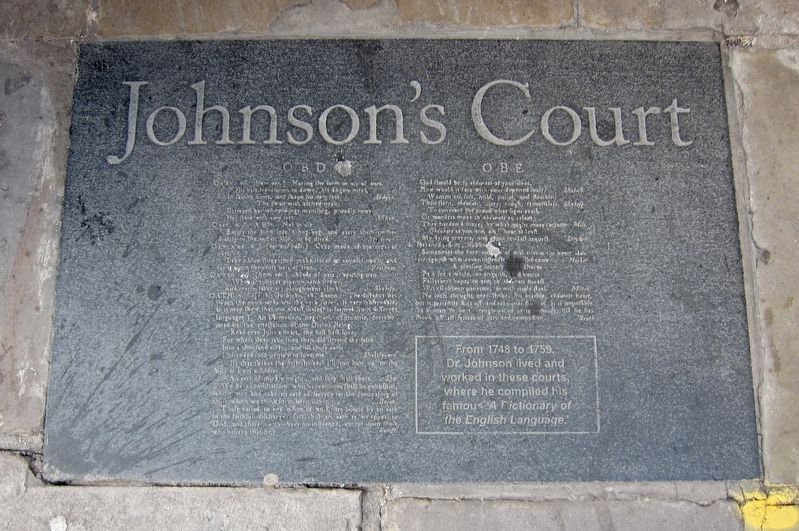 By Andrew Ruppenstein, October 15, 2017
1. Johnson's Court Marker
Inscription.
Johnson's Court. . [Inset within a page of Johnson's Dictionary is the marker text:]
From 1748 to 1759, Dr. Johnson lived and worked in these courts, where he compiled his famous 'A Dictionary of the English Language.'. . This historical marker is in City of London England United Kingdom

[Inset within a page of Johnson's Dictionary is the marker text:]
From 1748 to 1759,
Dr. Johnson lived and
worked in these courts,
where he compiled his
famous 'A Dictionary of
the English Language.'

Topics. This historical marker is listed in this topic list: Arts, Letters, Music. A significant historical year for this entry is 1748. 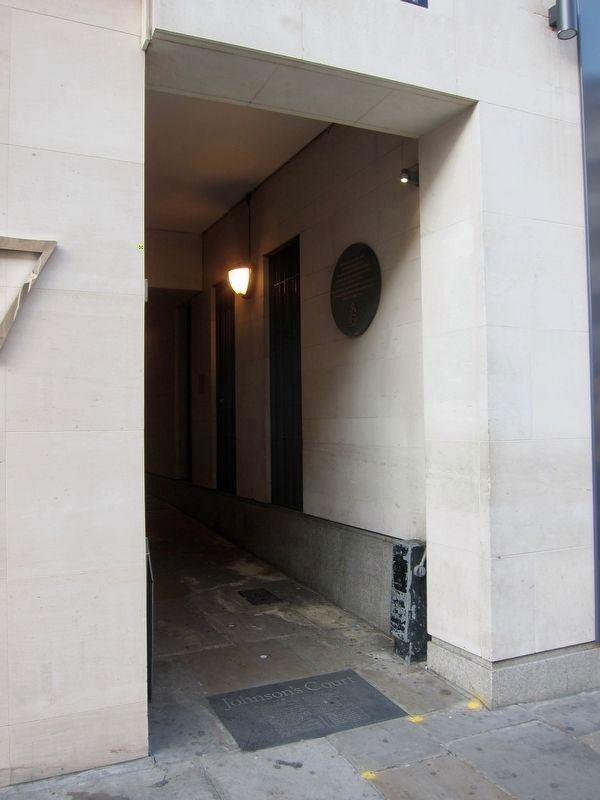 By Andrew Ruppenstein, October 15, 2017
2. Johnson's Court Marker - Wide View
Johnson's Court marker is visible here, embedded in the sidewalk at the entrance of the Court entrance from the north side of Fleet Street. Also visible is the British Institute of Professional Photography marker, mounted on the wall. One would use this entrance to get to the courtyard to see the City of London Corporation's historical marker for a house of Johnson's that is no longer extant. And from there one would follow the signs to Johnson's House on Gough Street, only a few steps further.

Also see . . .
1. History of Johnson’s Dictionary. (Submitted on December 30, 2017.)
2. A Dictionary of the English Language (Wikipedia). "Published on 15 April 1755 and written by Samuel Johnson, A Dictionary of the English Language, sometimes published as Johnson's Dictionary, is among the most influential dictionaries in the history of the English language....Until the completion of the Oxford English Dictionary 173 years later, Johnson's was viewed as the pre-eminent English dictionary. According to Walter Jackson Bate, the Dictionary 'easily ranks as one of the greatest single achievements of scholarship, and probably the greatest ever performed by one individual who laboured under anything like the disadvantages in a comparable length of time'." (Submitted on December 30, 2017.)

3. 1755 - Johnson's Dictionary (British Library). "Samuel Johnson's 'Dictionary of the English Language' is one of the most famous dictionaries in history. First published in 1755, the dictionary took just over eight years to compile, required six helpers, and listed 40,000 words. Each word was defined in detail, the definitions illustrated with quotations covering every branch of learning. It was a huge scholarly achievement, a more extensive and complex dictionary than any of its predecessors - and the comparable French Dictionnarre had taken 55 years to compile and required the dedication of 40 scholars." (Submitted on December 30, 2017.)
Credits. This page was last revised on December 30, 2017. It was originally submitted on December 30, 2017, by Andrew Ruppenstein of Sacramento, California. This page has been viewed 126 times since then and 8 times this year. Photos:   1, 2. submitted on December 30, 2017, by Andrew Ruppenstein of Sacramento, California.
Share this page.