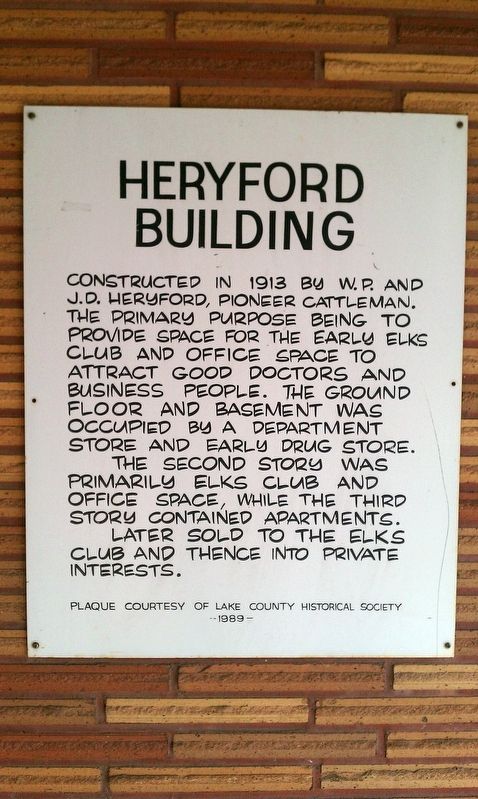 Photographed By Douglass Halvorsen, March 3, 2013
1. Heryford Building Marker
Inscription.
Heryford Building. . Constructed in 1913 by W.P. and J.D. Heryford, pioneer cattlemen, the primary purpose being to provide space for the early Elks Club and office space to attract good doctors and business people. The ground floor and basement was occupied by a department store and early drug store. The second story was primarily Elks Club and office space, while the third story contained apartments. Later sold to the Elks Club and thence into private interests. . This historical marker was erected in 1989 by Lake County Historical Society. It is in Lakeview in Lake County Oregon

Topics. This historical marker is listed in these topic lists: Fraternal or Sororal Organizations • Industry & Commerce. A significant historical year for this entry is 1913. 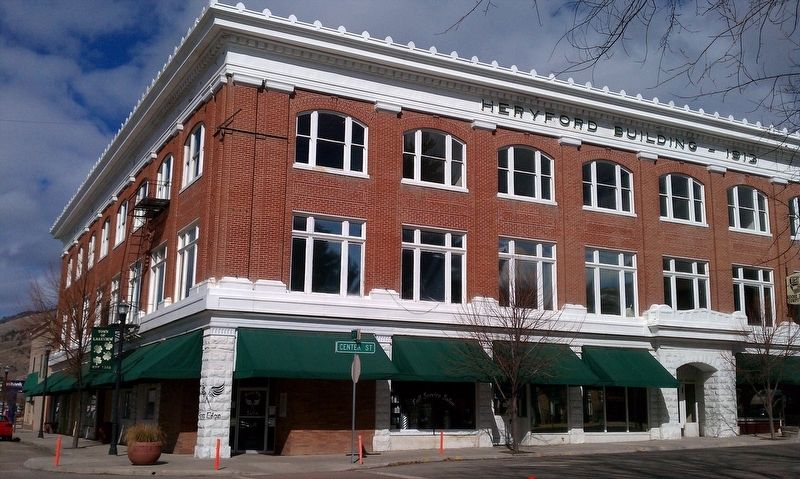 Regarding Heryford Building. Wikipedia describes the building well and tell us: "The Heryford Brothers Building is a three-story Classical Revival style structure with 54,000 square feet (5,000 m2) of interior floor space. It was designed by San Francisco architect F. S. DeLongchamp, and constructed by I. A. (Andy) Underwood, a prominent Lakeview builder. When it was opened, the first floor was occupied by the Lakeview Mercantile Company, Lakeview’s post office, and the Hall and Reynolds drug store. The United States Land Office and the local Elks Lodge occupied the second floor with professional offices on the third floor. The building included many features that were considered very modern, especially in an isolated eastern Oregon community in the early 20th century. These features included an electric power 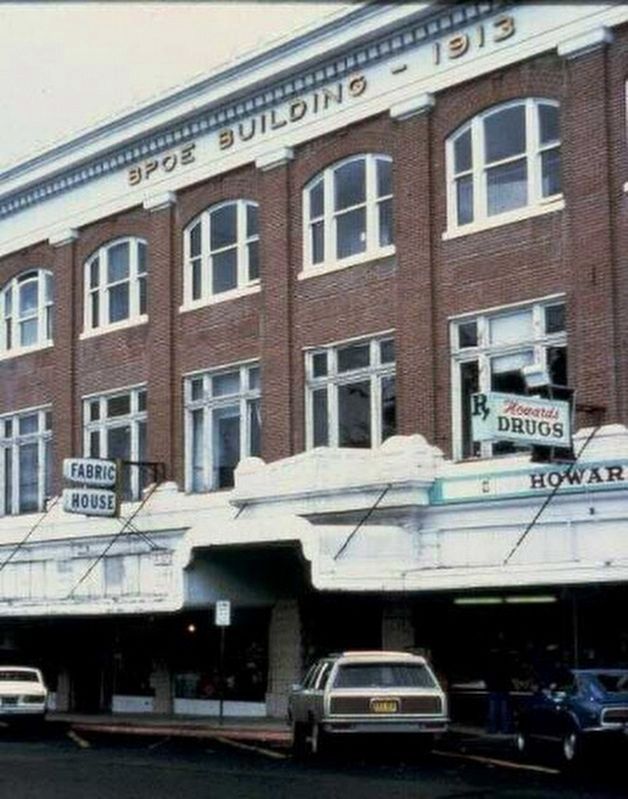 University of Oregon Digital Collection
3. BPOE Building before it was renamed to the Heryford Building
generator, central stream heat, elevators, telephones, electric lights, and hot water throughout the building.

The building is a steel and masonry structure with a footprint measuring 107 feet (33 m) by 128 feet (39 m). The main entrance faces Center Street. It is flanked by rusticated stone pillars and matching arch with a classical header above the double-door entry. There are rusticated stone pillars between the ground floor windows with brick pilasters above. There is also an inset entryway at the southwest corner of the building, facing the Center Street and F Street intersection. A heavy wooden awning suspended over the sidewalks along the first floor frontage was added sometime after the original construction. It was removed sometime after 2001, restoring the exterior to its original form. The second floor has square-framed triple window groups with upper transom windows above the main panes. The windows are all mounted in pine casement frames. On the third floor, the triple window groups are repeated, but within rounded arch frames. The building’s sheet metal cornices have elaborate entablature, frieze, and dentil elements. The building also has a full basement.

Over the years, the first floor has been extensively remodeled to accommodate new commercial tenants. The mercantile store was replaced by a restaurant, and then new commercial space. Later, the 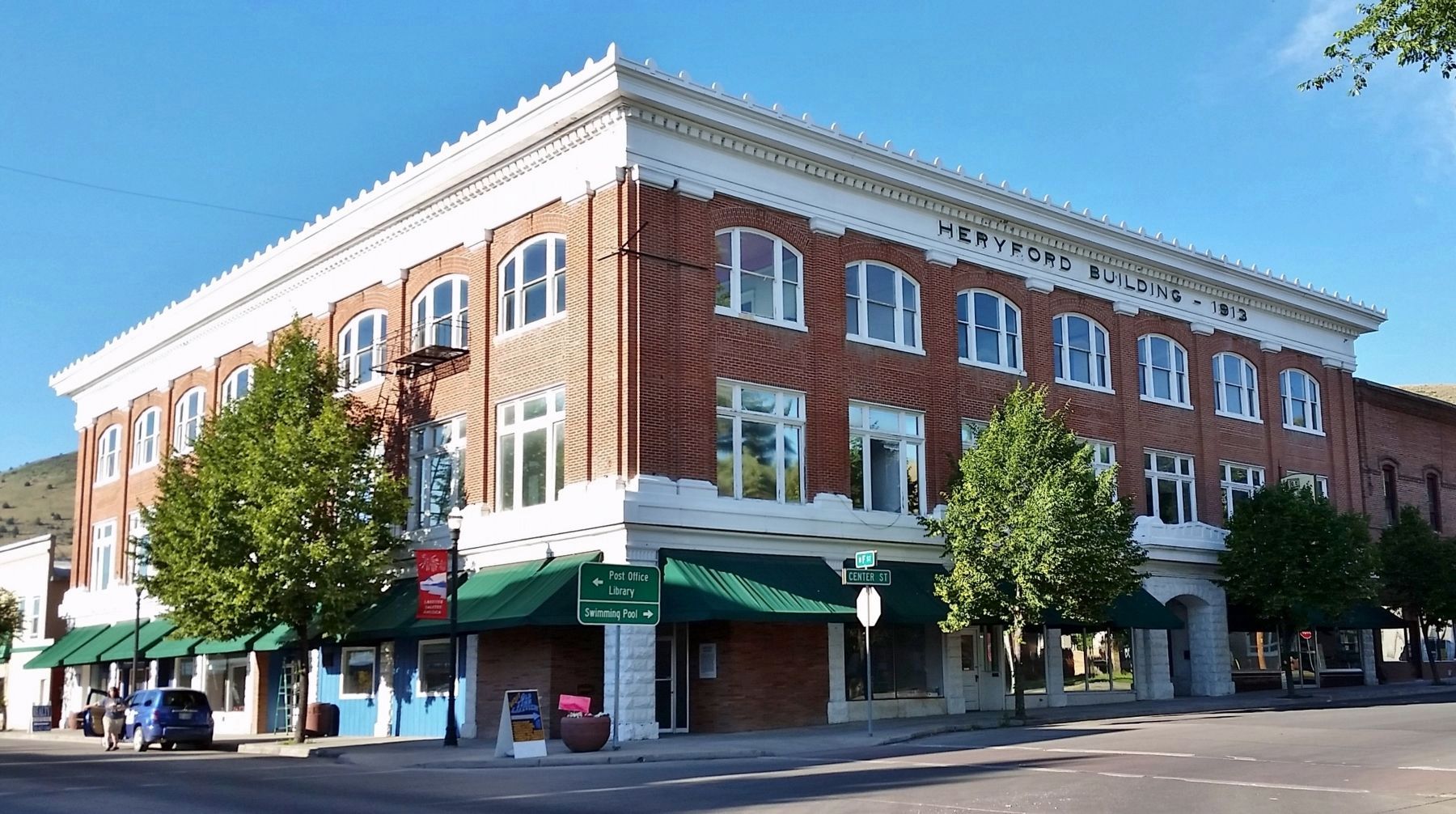 Because of its importance to local history, the Heryford Building was listed on the National Register of Historic Places in 1980."