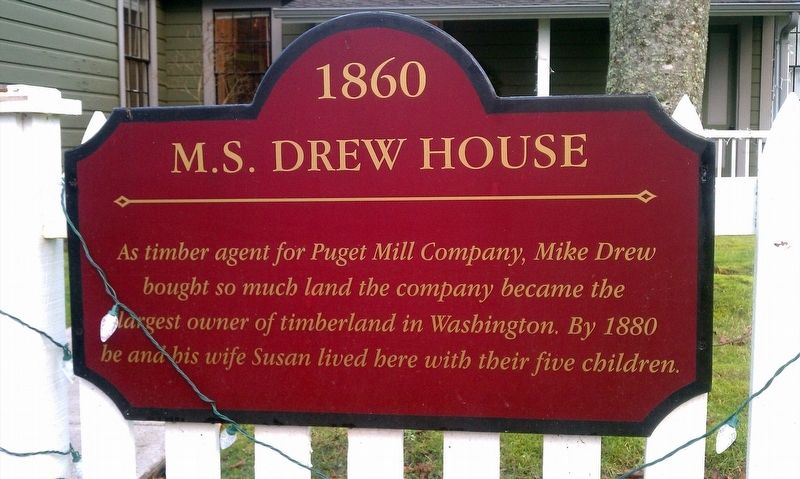 Photographed By Douglass Halvorsen, December 30, 2012
1. M.S. Drew House Marker
Inscription.
M.S. Drew House. As timber agent for Puget Mill Company, Mike Drew bought so much land the company became the largest owner of timberland in Washington. By 1880 he and his wife Susan lived here with their five children. . This historical marker is in Port Gamble in Kitsap County Washington

As timber agent for Puget Mill Company, Mike Drew bought so much land the company became the largest owner of timberland in Washington. By 1880 he and his wife Susan lived here with their five children.

Topics. This historical marker is listed in this topic list: Notable Buildings. A significant historical year for this entry is 1860. 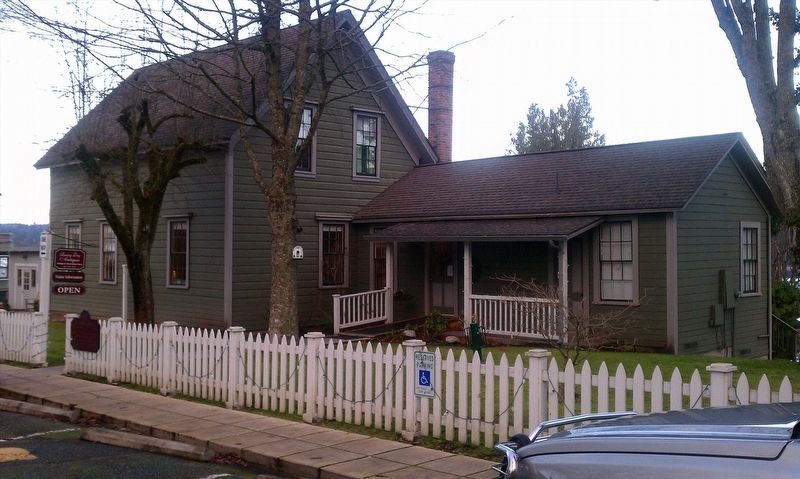 Click or scan to see
this page online
of this marker); WM. Walker - E.G. Ames House (within shouting distance of this marker). Touch for a list and map of all markers in Port Gamble.

Regarding M.S. Drew House. The National Register of Historic Places Nomination Form provides additional history: Michael S. Drew, a native of East Machias, Maine, reportedly arrived at Port Gamble in 1858 and worked for Puget Mill Company much of the time until 1889 when he moved to Seattle and entered the real estate business. For a period of time around 1870 he served as customs agent at Port Townsend, apparently retaining ownership of his house at Port Gamble. During the years he worked for Puget Mill, Drew held a variety of jobs including timber agent and "overseer in mill" - in 1877 the Puget Sound Weekly Argus (Port Townsend) termed him "the gentlemanly 'Boss' of the mill." As the company's timber agent, he purchased so much land on its behalf that it became the largest owner of timberland in Washington. Company history relates that Drew married Belle Biles, the first schoolteacher hired at Port Gamble. This, however, is not supported by federal census schedules which show that Michael Drew was married for many years to a woman from Kentucky named Susan. By 1880 the couple had five children, four sons and a daughter, a likely reason they enlarged their house sometime then and 1885.
Credits. This page was last revised on January 20, 2018. It was originally submitted on January 18, 2018, by Douglass Halvorsen of Klamath Falls, Oregon. This page has been viewed 142 times since then and 12 times this year. Photos:   1, 2. submitted on January 18, 2018, by Douglass Halvorsen of Klamath Falls, Oregon. • Bill Pfingsten was the editor who published this page.
Share this page.