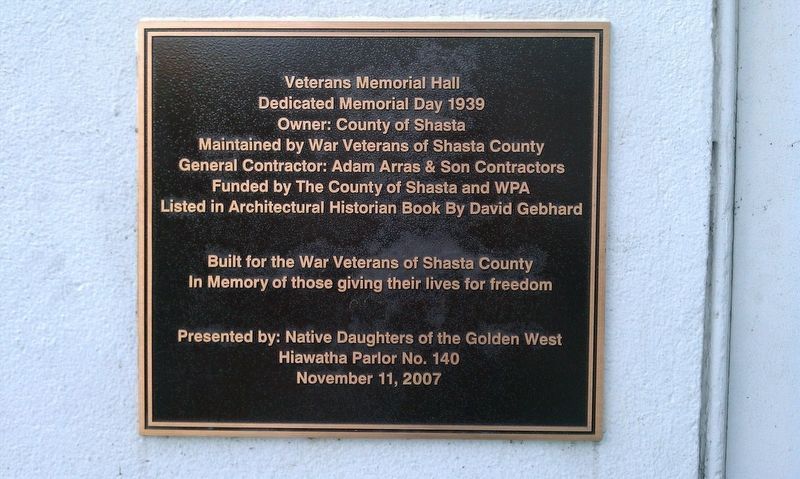 By Douglass Halvorsen, November 4, 2012
1. Veterans Memorial Hall Marker
Inscription.
Veterans Memorial Hall. .
Dedicated Memorial Day 1939 Owner: County of Shasta Maintained by War Veterans of Shasta County General Contractor: Adam Arras & Son Contractors Funded by The County of Shasta and WPA Listed in Architectural Historian Book By David Gebhard Built for the War Veterans of Shasta County In Memory of those giving their lives for freedom. . This memorial was erected in 1939 by Native Daughters of the Golden West Hiawatha Parlor No. 140. It is in Redding in Shasta County California

Erected 1939 by Native Daughters of the Golden West Hiawatha Parlor No. 140.

Topics and series. This memorial is listed in this topic list: Military. In addition, it is included in the Native Sons/Daughters of the Golden West, and the Works Progress Administration (WPA) projects series lists.

Other nearby markers. At least 8 other markers are within 5 miles of this marker, measured as the crow flies. Veterans Memorial Building Memorial (a few steps from this marker); Japanese Attack World War II Memorial 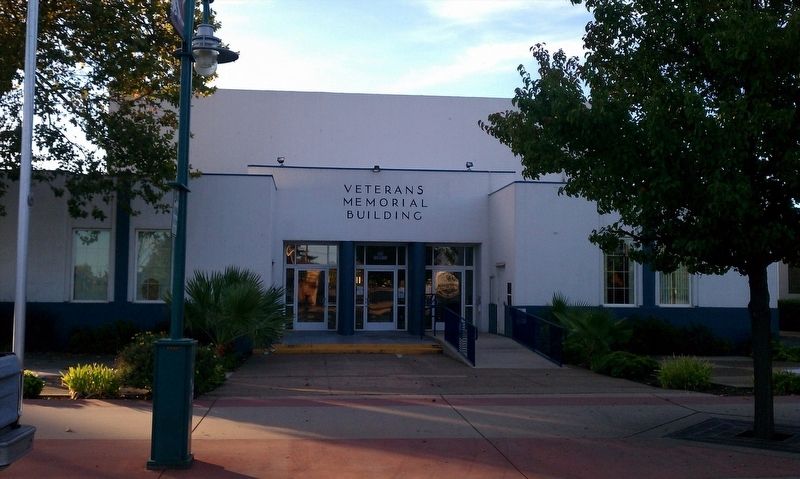 Regarding Veterans Memorial Hall. The Redding.com Record Searchlight website contained an article from June 14, 2009 highlighting the history of this building: Built with New Deal economic stimulus money during the Great Depression, the Veterans Memorial Building in downtown Redding turns 70 this year and it's probably never looked better - belying decades of often tense relations between local veterans and Shasta County officials over the hall's operation and maintenance. "It's in phenomenal shape," Thomas Forbish, Shasta County facilities manager, said of the 12,000-square-foot building on Yuba Street, which over the years has hosted varied events from dances and boxing matches to weddings. It recently was 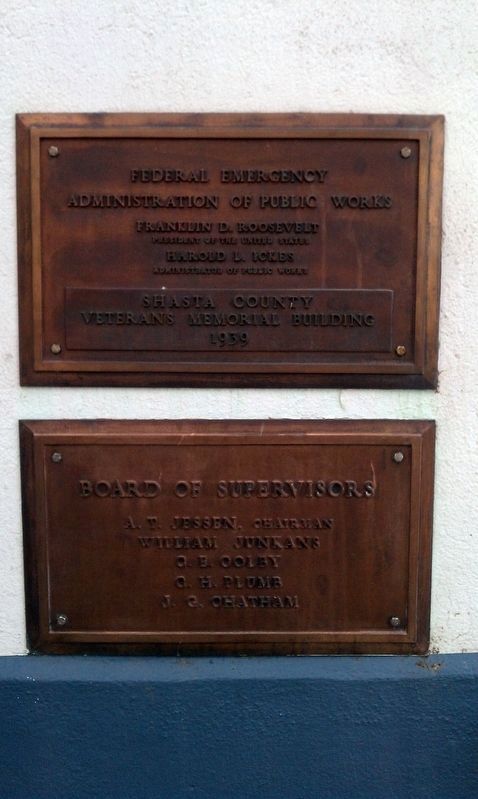 Board Of Supervisors
A. T. Jessen, Chairman
William Junkans
C. E. Coley C. H. Plumb
J. G. Chatham
painted inside and out, troublesome spots on the roof were repaired and handicapped-accessible restrooms installed. In the late 1990s, the interior was remodeled (the ceiling dropped from 28 feet to 15 feet to minimize the thunderous noise from passing trains) and a new heating and air conditioning system was installed. The veterans hall, an example of what's known as the Late WPA Moderne style, is one of a handful of architecturally significant buildings in Redding. Buildings like it "still stand as monuments to nationalism based on need," wrote architectural historian David Gebbard in his book "Architecture in San Francisco and Northern California." "That was a great era of design," said Redding architect Les Melburg of the Moderne period. "It's a great building - there's an industrial chic to it, a classic simplicity but with layers of details and design interest." The Moderne style was well suited for government buildings, said Redding architect Ron Beyer. "(There was) just enough Moderne detailing injected to convey a contemporary feel as well as the traditional authority of the classical style." However, he thinks the latest paint job detracts from the building. "I am disturbed about the way the current building is painted with blue trim emphasizing architectural elements that are uncharacteristic of this style," he said. "I am happy it is only paint and someday will be returned 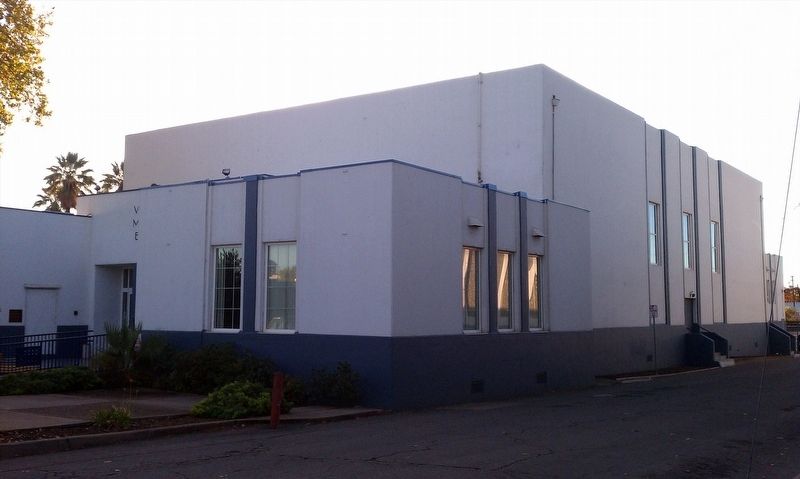 By Douglass Halvorsen, November 4, 2012
4. Veterans Memorial Hall
to its original glory." The building was designed by the Masten and Hurd architectural firm of San Francisco. It later helped design Foothill College in Los Altos Hills and the McAllister Building at Hastings College of Law in San Francisco. The contractor was Adam Arras & Son. The building was estimated to cost about $70,000, the Shasta Dial newspaper reported in 1937. Some of the money came from local taxes, but most came from the Federal Emergency Administration of Public Works. A weathered brass plaque near the entry lists the names of President Franklin D. Roosevelt and Harold L. Ickes, his administrator of public works. Years later, it's a wonder the Redding veterans hall escaped the wrecking ball. In the 1970s, the hall was in such bad shape that one outspoken World War I veteran, Henry Butler, called it a "disgrace to the city and the county" and accused the board of supervisors of "neglect." At the time, rainwater poured through the roof onto the maple floor, fire doors wouldn't open and the landscaping was neglected. Under pressure from veterans, the supervisors found money to make the needed repairs and the veterans were placated for a time. From the beginning, county officials and veterans groups tussled over the building's cost and who was responsible for its upkeep. Rental income has never amounted to anything but a tiny fraction of the hall's annual expenses. Veterans groups, such as the Veterans of Foreign Wars and the American Legion, aren't charged to use the hall. Neither are county departments, which use the hall for training sessions and other functions. The hall currently rents to the public for $500 a day. A new sound and lighting system would make the hall a "more palatable venue" for events, said Shasta County's Forbish, but neither the veterans nor the county has the money. The Redding hall accounts for about a quarter of the roughly $90,000 a year the county spends on its four veterans halls - the others are in Anderson, Burney and Fall River. Flora Pearson of Redding, a veterans activist and historian of the hall, remembers relations improving dramatically with the arrival of Doug Latimer, former county administrative officer. "He was an Army brat. He appreciated veterans," Pearson recalled. Before Latimer arrived, county officials wanted to evict the veterans, tear down the hall or use it as storage, she said. Veterans aren't the only ones who have fond memories of the hall. In the 1960s, for example, it hosted boxing matches on Saturday nights where ringside seats went for $2.50 and trophies were sponsored by The Shack Restaurant, the Temple Tavern and Thatcher-Stevens Pontiac. In the 1950s, before Enterprise High School opened, some students went to school in makeshift classrooms in the hall. A few years later, Redding residents with mail to send or pick up marched into the hall while renovations were made to the U.S. Post Office next door, also an example of WPA Moderne architecture. From the start, the hall played host to community dances, which didn't sit well with some Redding residents who complained about rowdy crowds and drinking. The hall was dedicated on Memorial Day 1939 - Superior Court Judge Albert Ross spoke and the Shasta Belles sang "God Bless America." But even before the hall opened, some fretted about the sort of meetings and events that might be held there. One newspaper account from the late 1930s reads: "Grover E. Oaks, who happened to be present (at the board of supervisors meeting) observed that as a considerable taxpayer, who was not a veteran, he hoped and trusted that the veterans would permit no communistic or other revolutionary meetings within the hall. 'This is a good old United States, yet,' said Oaks."
Credits. This page was last revised on January 27, 2018. It was originally submitted on January 26, 2018, by Douglass Halvorsen of Klamath Falls, Oregon. This page has been viewed 93 times since then and 15 times this year. Photos:   1, 2, 3, 4. submitted on January 26, 2018, by Douglass Halvorsen of Klamath Falls, Oregon. • Andrew Ruppenstein was the editor who published this page.
Share This Page.