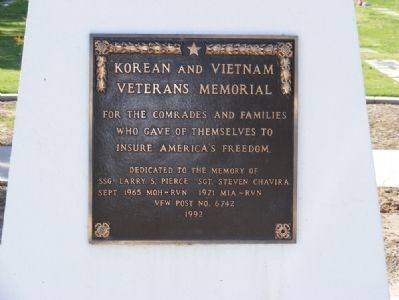 Photographed By Don Morfe, September 20, 2007
1. Korean and Vietnam Veterans Memorial Marker
Inscription.
Korean and Vietnam Veterans Memorial. .
For the comrades and families who gave of themselves to insure America’s Freedom., Dedicated to the memory of SSG Larry S. Pierce, Sept 1965, MOH-RVN; Sgt. Steven Chavira, 1971 MIA-RVN.. . This memorial was erected in 1992 by VFW Post No. 6742. It is in Wasco in Kern County California

For the comrades and families
who gave of themselves to
insure America’s Freedom.

Location. 35° 36.171′ N, 119° 23.013′ W. Marker is in Wasco, California, in Kern County. Memorial can be reached from Leonard Avenue north of Paso Robles Highway (Route 46), on the right when traveling north. This marker is located at the Wasco Memorial Park Cemetery. Touch for map. Marker is at or near this postal address: 300 Leonard Avenue, Wasco CA 93280, United States of America. Touch for directions. 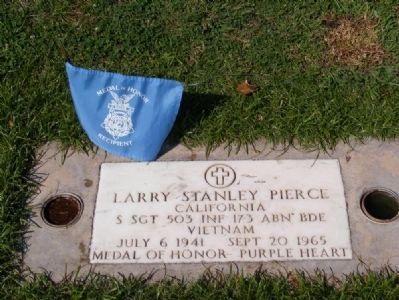 Click or scan to see
this page online
(approx. 13.4 miles away); Buttonwillow Tree (approx. 14½ miles away).

Additional commentary.
1. SSG Larry S. Pierce
Larry Pierce is buried in Wasco Memorial Park Cemetery in Block 62, Lot L. The grave GPS coordinates are N35.6025 W119.3833.
MEDAL OF HONOR CITATION:
*PIERCE, LARRY S. (KILLED IN ACTION)
Rank and organization: Sergeant, U.S. Army, Headquarters and Headquarters Company, 1st Battalion (Airborne), 503d Infantry, 173d Airborne Brigade. Place and date: Near Ben Cat, Republic of Vietnam, 20 September 1965. Entered service at: Fresno, Calif. Born: 6 July 1941, Wewoka, Okla. G.O. No.: 7, 24 February 1966. Citation: For conspicuous gallantry and intrepidity at the risk of life above and beyond the call of duty. Sgt. Pierce was serving as squad leader in a reconnaissance platoon when his patrol was ambushed by hostile forces. Through his inspiring leadership and personal courage, the squad succeeded in eliminating an enemy machinegun and routing the opposing force. While pursuing the fleeing enemy, the squad came upon a dirt road and, as the main body of his men entered the road, Sgt. Pierce discovered an antipersonnel mine emplaced in the road bed. Realizing that the mine could destroy the majority of his squad, Sgt. Pierce saved the lives of his men 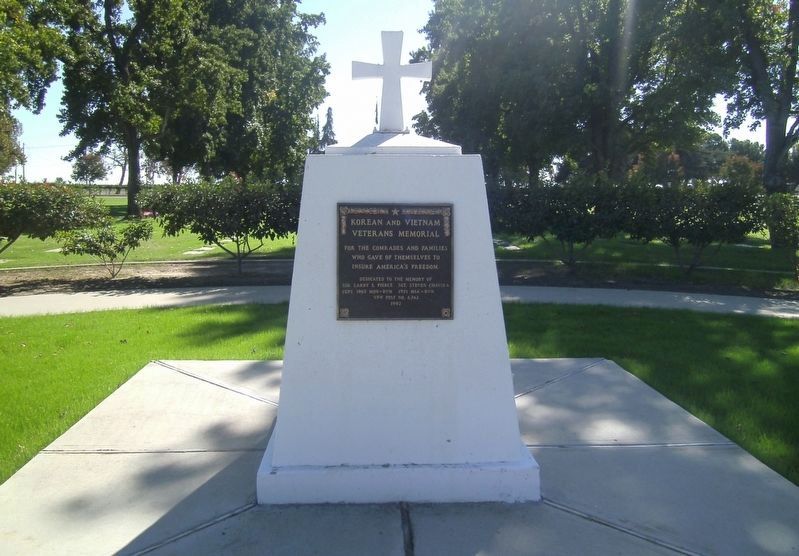