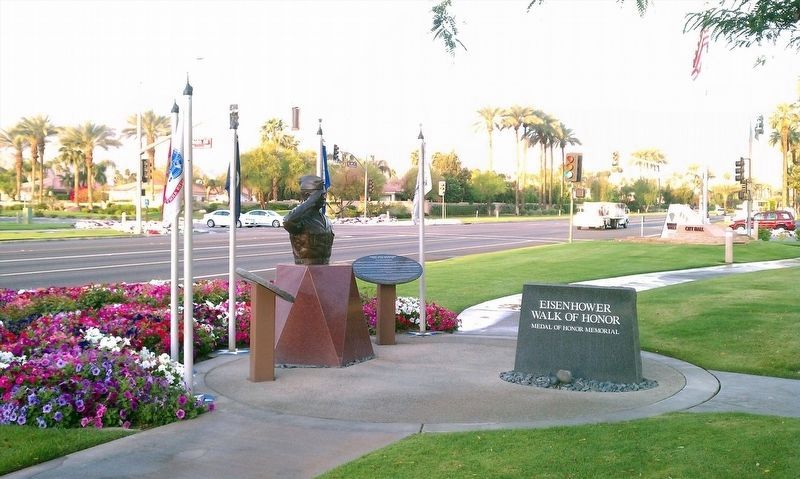 The Eisenhower Walk of Honor allows all of us to recall the debt of gratitude owed to ordinary people for extraordinary acts of patriotism and courage. Men and women doing their duty for their country, honorably and with integrity.

This tribute to all armed forces veterans was conceived and designed with the vision of purpose to honor this nation's proud warriors, and remind all generations of the sacrifices these men, women and their families have made.

The Memorial’s centerpiece, the “eternal water spring,” exemplifies the uninterrupted flow of sacrifice for the spirit of freedom. The water feature is surrounded by five Medal of Honor recipients with ties to the Coachella Valley. Truly, these five men are exceptional heroes and deserving of our honor.

The Memorial is also a place to honor Indian Wells residents having served in our Armed Forces. Carved into a wall of granite are deserving residents identified by rank, names and branch of service.

When presented with the vision of building this Memorial, the City Council eagerly approved the project and proceeded to demonstrate their Indian 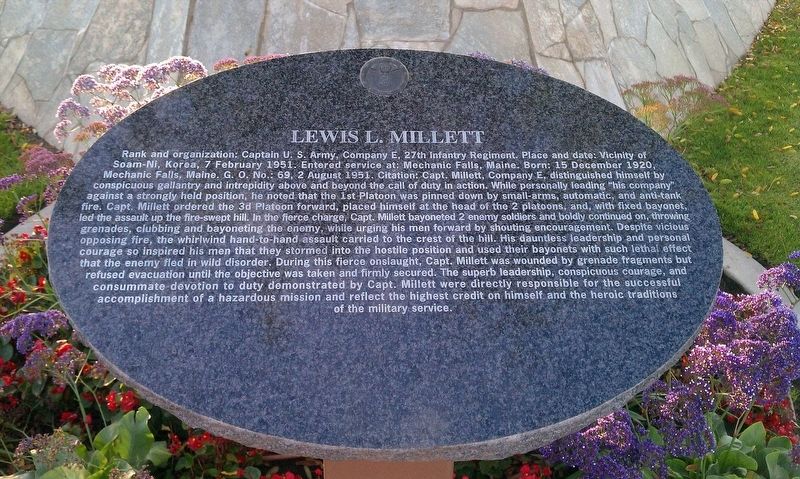 By Douglass Halvorsen, March 28, 2013
2. Lewis L. Millett
Wells’ devotion to honoring those who have given to the cause of freedom for all Americans in the past and for future generations to come.

Dedicated to Medal of Honor recipients and all Armed Forces personnel who have served our nation in war and peacetime.

Lewis L. Millett
Rank and organization: Captain, U.S. Army, Company E, 27th Infantry Regiment. Place and date: Vicinity of Soam-Ni, Korea, 7 February 1951. Entered service at: Mechanic Falls, Maine. Born: 15 December 1920, Mechanic Falls, Maine. G.O. No.: 69, 2 August 1951. Citation: Capt. Millett, Company E, distinguished himself by conspicuous gallantry and intrepidity above and beyond the call of duty in action. While personally leading his company in an attack against a strongly held position he noted that the 1st Platoon was pinned down by small-arms, automatic, and antitank fire. Capt. Millett ordered the 3d Platoon forward, placed himself at the head of the 2 platoons, and, with fixed bayonet, led the assault up the fire-swept hill. In the fierce charge Capt. Millett bayoneted 2 enemy soldiers and boldly continued on, throwing grenades, clubbing and bayoneting the enemy, while urging his men forward by shouting encouragement. Despite vicious opposing fire, the whirlwind hand-to-hand assault carried to the crest of the hill. His dauntless leadership and personal courage so inspired his men 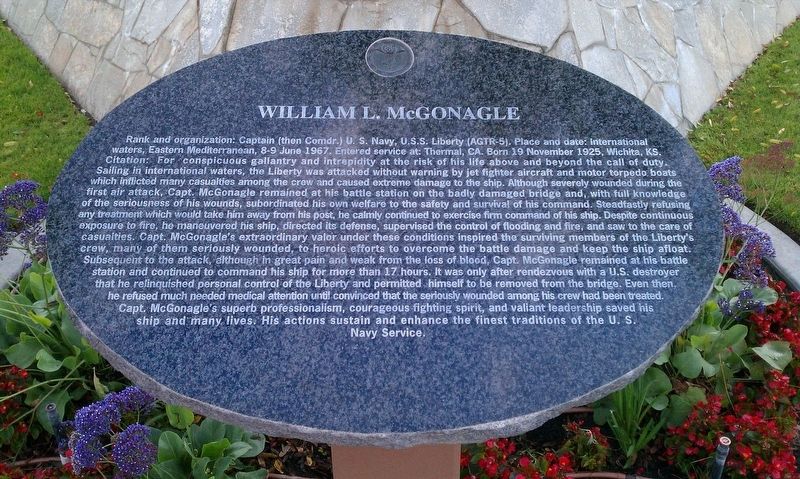 By Douglass Halvorsen, March 28, 2013
3. William L. McGonagle
that they stormed into the hostile position and used their bayonets with such lethal effect that the enemy fled in wild disorder. During this fierce onslaught Capt. Millett was wounded by grenade fragments but refused evacuation until the objective was taken and firmly secured. The superb leadership, conspicuous courage, and consummate devotion to duty demonstrated by Capt. Millett were directly responsible for the successful accomplishment of a hazardous mission and reflect the highest credit on himself and the heroic traditions of the military service.

William L. McGonagle
Rank and organization: Captain (then Comdr.) U.S. Navy, U.S.S. Liberty (AGTR-5). Place and date: International waters, Eastern Mediterranean, 8-9 June 1967. Entered service at: Thermal, CA. Born 19 November 1925, Witchita, KS. Citation: The President of the United States takes pleasure in presenting the Medal of Honor to William Loren McGonagle (494467), Captain, U.S. Navy, for conspicuous gallantry and intrepidity at the risk of his life above and beyond the call of duty as Commanding Officer of the U.S.S. LIBERTY in the Mediterranean Sea on 8 and 9 June 1967. Sailing in international waters, the LIBERTY was attacked without warning by jet fighter aircraft and motor torpedo boats which inflicted many casualties among the crew and caused extreme damage to the ship. Although severely wounded 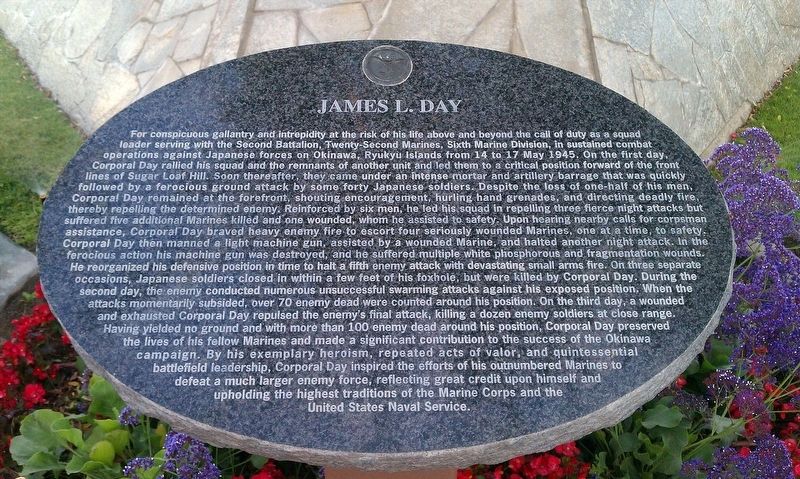 By Douglass Halvorsen, March 28, 2013
4. James L. Day
during the first air attack, Captain McGonagle remained at his battle station on the badly damaged bridge and, with full knowledge of the seriousness of his wounds, subordinated his own welfare to the safety and survival of his command. Steadfastly refusing any treatment which would take him away from his post, he calmly continued to exercise firm command of his ship. Despite continuous exposure to fire, he maneuvered his ship, directed its defense, supervised the control of flooding and fire, and saw to the care of the casualties. Captain McGonagle's extraordinary valor under these conditions inspired the surviving members of the LIBERTY's crew, many of them seriously wounded, to heroic efforts to overcome the battle damage and keep the ship afloat. Subsequent to the attack, although in great pain and weak from the loss of blood, Captain McGonagle remained at his battle station and continued to command his ship for more than 17 hours. It was only after rendezvous with a U.S. destroyer that he relinquished personal control of the LIBERTY and permitted himself to be removed from the bridge. Even then, he refused much needed medical attention until convinced that the seriously wounded among his crew had been treated. Captain McGonagle's superb professionalism, courageous fighting spirit, and valiant leadership saved his ship and many lives. His actions sustain and enhance the finest 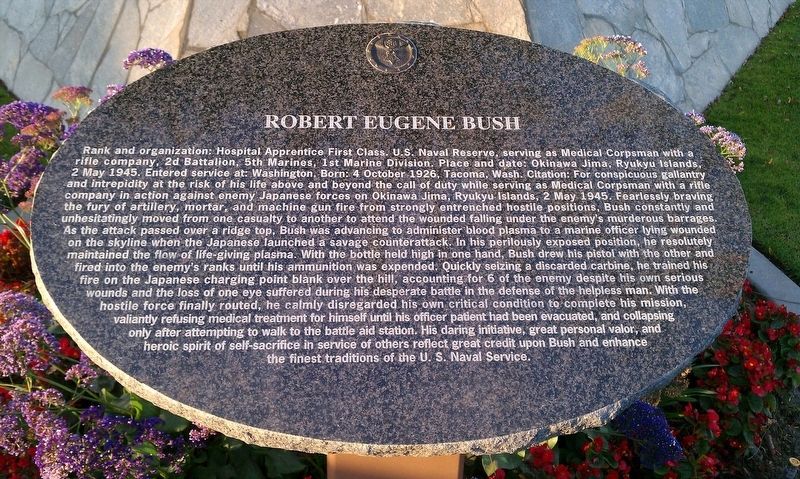 James L. Day
For conspicuous gallantry and intrepidity at the risk of his life above and beyond the call of duty as a squad leader serving with the Second Battalion, Twenty-Second Marines, Sixth Marine Division, in sustained combat operations against Japanese forces on Okinawa, Ryukyu Islands from 14 to 17 May 1945. On the first day, Corporal Day rallied his squad and the remnants of another unit and led them to a critical position forward of the front lines of Sugar Loaf Hill. Soon thereafter, they came under an intense mortar and artillery barrage that was quickly followed by a ferocious ground attack by some forty Japanese soldiers. Despite the loss of one-half of his men, Corporal Day remained at the forefront, shouting encouragement, hurling hand grenades, and directing deadly fire, thereby repelling the determined enemy. Reinforced by six men, he led his squad in repelling three fierce night attacks but suffered five additional Marines killed and one wounded, whom he assisted to safety. Upon hearing nearby calls for corpsman assistance, Corporal Day braved heavy enemy fire to escort four seriously wounded Marines, one at a time, to safety. Corporal Day then manned a light machine gun, assisted by a wounded Marine, and halted another night attack. In the ferocious action, his machine gun was destroyed, and he suffered 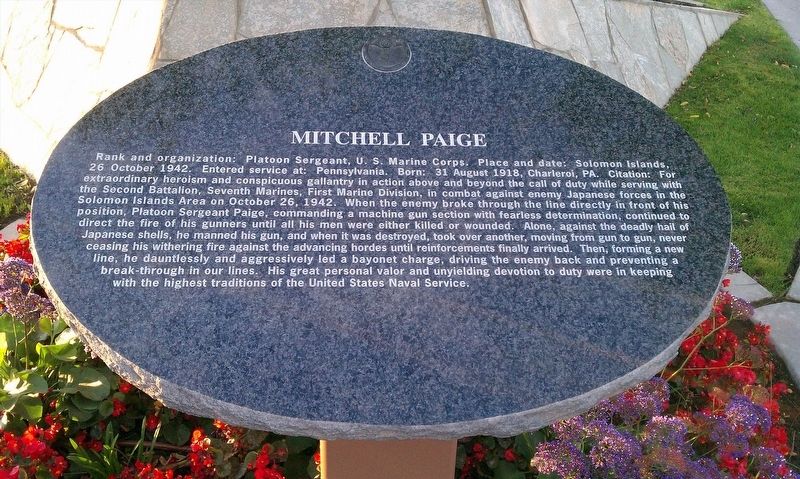 By Douglass Halvorsen, March 28, 2013
6. Mitchell Paige
multiple white phosphorous and fragmentation wounds. He reorganized his defensive position in time to half a fifth enemy attack with devastating small arms fire. On three separate occasions, Japanese soldiers closed to within a few feet of his foxhole, but were killed by Corporal Day. During the second day, the enemy conducted numerous unsuccessful swarming attacks against his exposed position. When the attacks momentarily subsided, over 70 dead enemy were counted around his position. On the third day, a wounded and exhausted Corporal Day repulsed the enemy's final attack, killing a dozen enemy soldiers at close range. Having yielded no ground and with more than 100 enemy dead around his position, Corporal Day preserved the lives of his fellow Marines and made a significant contribution to the success of the Okinawa campaign. By his extraordinary heroism, repeated acts of valor, and quintessential battlefield leadership, Corporal Day inspired the efforts of his outnumbered Marines to defeat a much larger enemy force, reflecting great credit upon himself and upholding the highest traditions of the Marine Corps and the United States Naval Service. 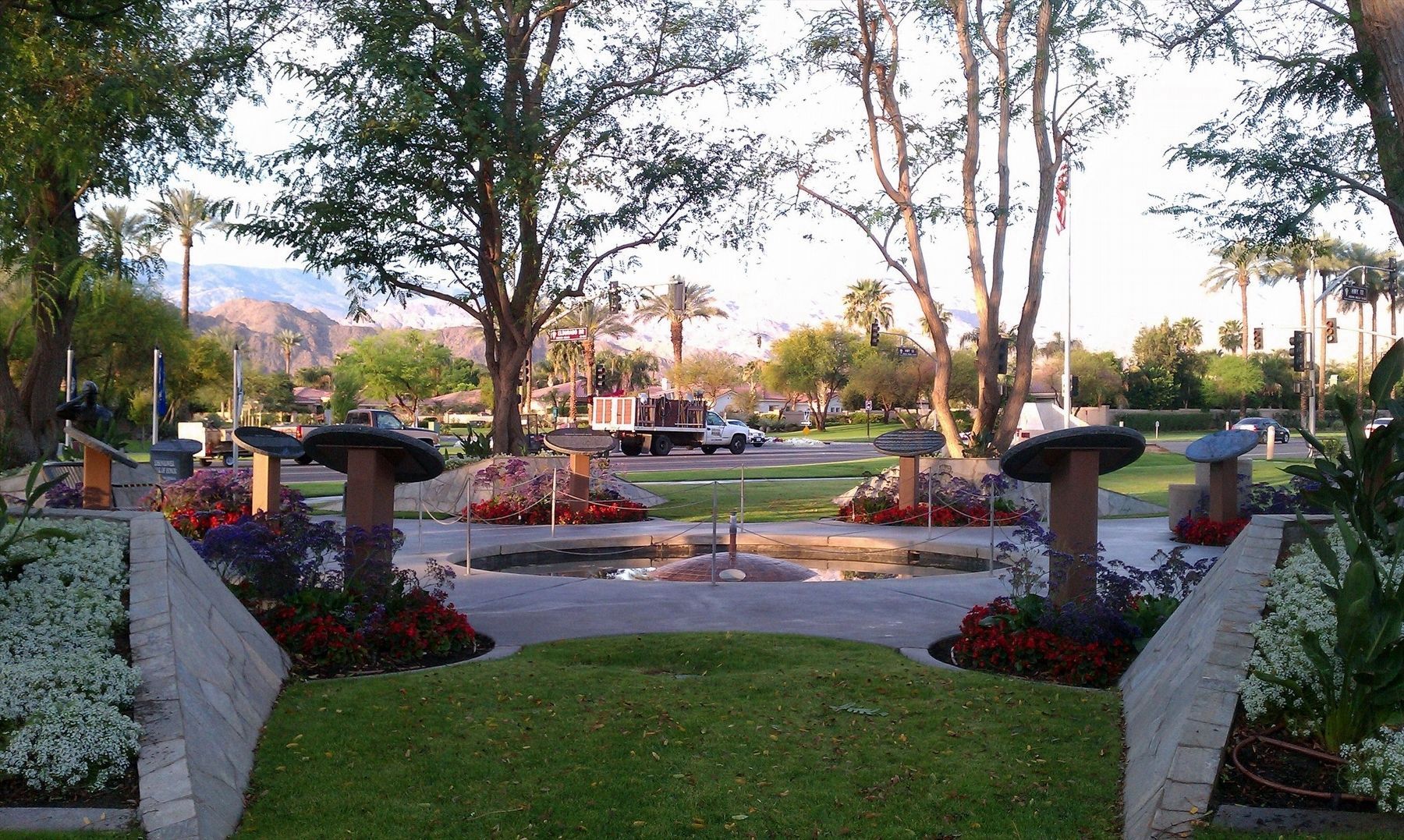 By Douglass Halvorsen, March 28, 2013
7. Eisenhower Walk of Honor
Jima, Ryukyu Islands, 2 May 1945. Entered service at: Washington. Born: 4 October 1926, Tacoma, Wash. Citation: For conspicuous gallantry and intrepidity at the risk of his life above and beyond the call of duty while serving as Medical Corpsman with a rifle company, in action against enemy Japanese forces on Okinawa Jima, Ryukyu Islands, 2 May 1945. Fearlessly braving the fury of artillery, mortar, and machinegun fire from strongly entrenched hostile positions, Bush constantly and unhesitatingly moved from 1 casualty to another to attend the wounded falling under the enemy's murderous barrages. As the attack passed over a ridge top, Bush was advancing to administer blood plasma to a marine officer Iying wounded on the skyline when the Japanese launched a savage counterattack. In this perilously exposed position, he resolutely maintained the flow of life-giving plasma. With the bottle held high in 1 hand, Bush drew his pistol with the other and fired into the enemy's ranks until his ammunition was expended. Quickly seizing a discarded carbine, he trained his fire on the Japanese charging pointblank over the hill, accounting for 6 of the enemy despite his own serious wounds and the loss of 1 eye suffered during his desperate battle in defense of the helpless man. With the hostile force finally routed, he calmly disregarded his own critical condition to complete his mission, valiantly refusing medical treatment for himself until his officer patient had been evacuated, and collapsing only after attempting to walk to the battle aid station. His daring initiative, great personal valor, and heroic spirit of self-sacrifice in service of others reflect great credit upon Bush and enhance the finest traditions of the U.S. Naval Service.

Mitchell Paige
Rank and organization: Platoon Sergeant, U.S. Marine Corps. Place and date: Solomon Islands, 26 October 1942. Entered service at: Pennsylvania. Born: 31 August 1918, Charleroi, Pa. Citation: For extraordinary heroism and conspicuous gallantry in action above and beyond the call of duty while serving with a company of marines in combat against enemy Japanese forces in the Solomon Islands on 26 October 1942. When the enemy broke through the line directly in front of his position, P/Sgt. Paige, commanding a machinegun section with fearless determination, continued to direct the fire of his gunners until all his men were either killed or wounded. Alone, against the deadly hail of Japanese shells, he fought with his gun and when it was destroyed, took over another, moving from gun to gun, never ceasing his withering fire against the advancing hordes until reinforcements finally arrived. Then, forming a new line, he dauntlessly and aggressively led a bayonet charge, driving the enemy back and preventing a breakthrough in our lines. His great personal valor and unyielding devotion to duty were in keeping with the highest traditions of the U.S. Naval Service.

Topics and series. This memorial is listed in these topic lists: Heroes • Military. In addition, it is included in the Medal of Honor Recipients series list.