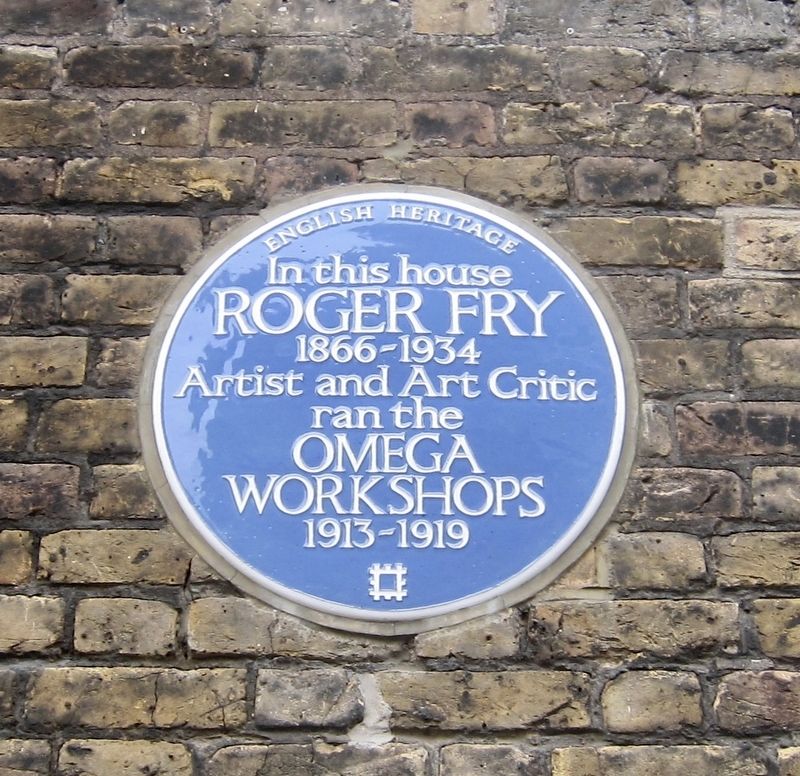 By Andrew Ruppenstein, March 18, 2018
1. Roger Fry Marker
Inscription.
Roger Fry. .
In this house Roger Fry 1866-1934 Artist and Art Critic ran the Omega Workshops 1913-1919. . This historical marker was erected in 2010 by English Heritage. It is in London Borough of Camden in Greater London County England United Kingdom 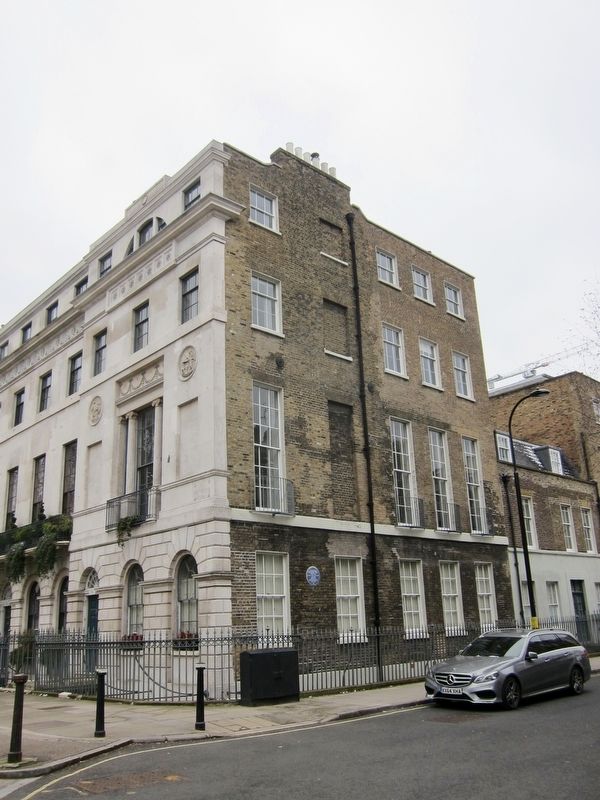 Also see . . .
1. Fry, Roger (1866-1934) (English Heritage). "Fry's Omega Workshops were set up in 1913 at 33 Fitzroy Square, part of a terrace by the Scottish architect Robert Adam (1728-92). This ground-breaking collective venture in the production and sale of objects of 'minor art' – ceramics, furniture, carpets, textiles and murals – involved such artists as Duncan Grant, Vanessa Bell, Henri Gaudier-Brzeska, Dora Carrington and Wyndham Lewis, but all the work was anonymous, being signed only with the Greek letter 'Ω'. Number 33 Fitzroy Square functioned as a workshop, a gallery and – on Thursday nights – as a club, with guests including George Bernard Shaw and W. B. Yeats. Though its influence on domestic design has been lasting, and the artefacts produced at the Fitzroy Square workshops are now much prized by collectors, it was never a commercial success in its own time, and closed in 1919." (Submitted on April 6, 2018.)

2. Roger Fry (Wikipedia). "Roger Eliot Fry (14 December 1866 – 9 September 1934) was an English painter and critic, and a member of the Bloomsbury Group. Establishing his reputation as a scholar of the Old Masters, he became an advocate of more recent developments in French painting, to which he gave the name Post-Impressionism. He was the first figure to raise public awareness of modern art in Britain, and emphasised the formal properties of paintings over the "associated ideas" conjured in the viewer by their representational content. He was described by the art historian Kenneth Clark as "incomparably the greatest influence on taste since Ruskin ... In so far as taste can be changed by one man, it was changed by Roger Fry". The taste Fry influenced was primarily that of the Anglophone world, and his success lay largely in alerting an educated public to a compelling version of recent artistic developments of the Parisian avant-garde." (Submitted on April 6, 2018.)