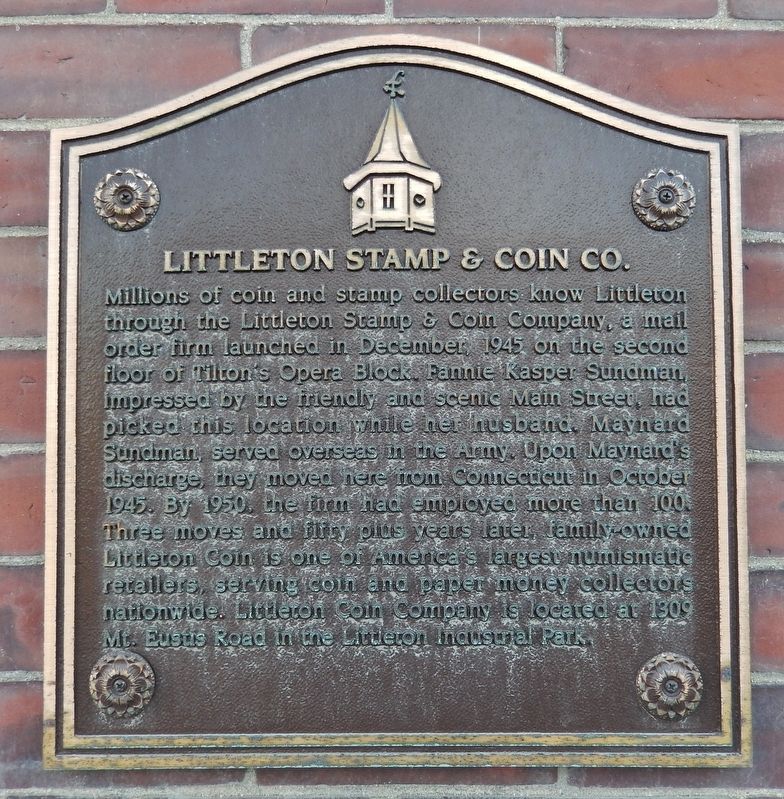 Millions of coin and stamp collectors know Littleton thought the Littleton Stamp & Coin Company, a mail order firm launched in December, 1945 on the second floor of Tilton’s Opera Block. Fannie Kasper Sundman, impressed by the friendly and scenic Main Street, had picked this location while her husband Maynard Sundman served overseas in the Army. Upon Maynard’s discharge, they moved here from Connecticut in October 1945. By 1950, the firm had employed more than 100. Three moves and fifty plus years later, family-owned Littleton Coin is one of America’s largest numismatic retailers, serving coin and paper money collectors nationwide. Littleton Coin Company is located at 1309 Mt. Eustis Road in the Littleton Industrial Park. 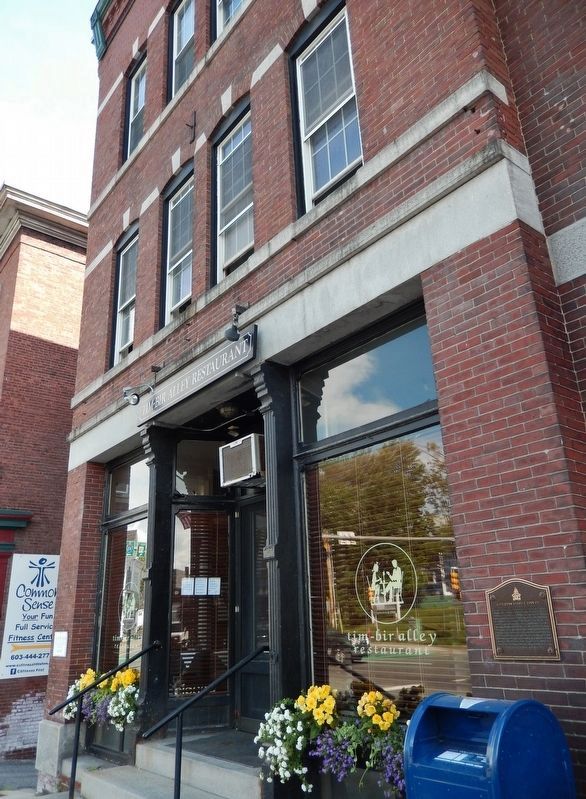 By Cosmos Mariner, July 7, 2017
2. Littleton Stamp & Coin Co. Marker (tall view; marker visible above mailbox)
mounted at eye-level directly on the front wall of the subject building. Touch for map. Marker is at or near this postal address: 7 Main Street, Littleton NH 03561, United States of America. Touch for directions.

Related markers. Click here for a list of markers that are related to this marker. Littleton, New Hampshire Historic Buildings

Also see . . .
1. Littleton Coin Company - Walking Tour Guide.
Owned and operated by the Sundman family, Littleton Coin has been a proud member of the Littleton community since 1945, and is one of the nation’s largest and most knowledgeable retailers of collectible coins and paper money. Founded in a upstairs office in the historic Tilton’s Opera Block, Littleton Coin now has its own modern 85,000-square-foot headquarters in Littleton’s Industrial Park. (Submitted on April 14, 2018, by Cosmos Mariner of Cape Canaveral, Florida.) 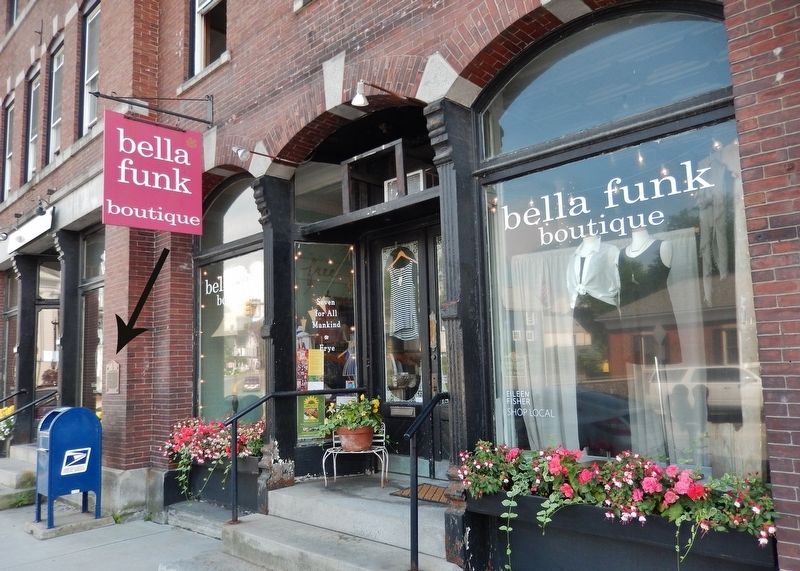 2. 71-year-old Littleton Coin Co. sold to its employees.
When his children didn’t want to continue running the 71-year-old business begun by his parents, David Sundman did the next best thing to keep the Littleton Coin Co. in the family — he sold it to its 315 employees. With annual sales in the range of $50 million, Littleton Coin is one of America’s largest coin and currency dealers. Sundman, who has been president since 1985, will continue in his post. He said he and his family members sold all their stock to the employee stock ownership plan, which went into effect January 2017. Littleton Coin follows in the footsteps of its sister company, Mystic Stamp Company of Camden, NY., which was headed by Sundman’s brother, Donald, and became employee-owned last April (2016). (Submitted on April 14, 2018, by Cosmos Mariner of Cape Canaveral, Florida.)

3. Celebrating over 70 Years of Friendly Service to Collectors.
(This link presents photographs, including the company's new 85,000 square foot headquarter building.)
Littleton Coin Company was founded by Maynard Sundman, who turned his enthusiasm for collecting into one of the largest collectibles firms in the country. Born October 17, 1915, Maynard grew up in Bristol, Connecticut, where a childhood surprise determined the course of his future. In 1927, a friend showed 12-year-old 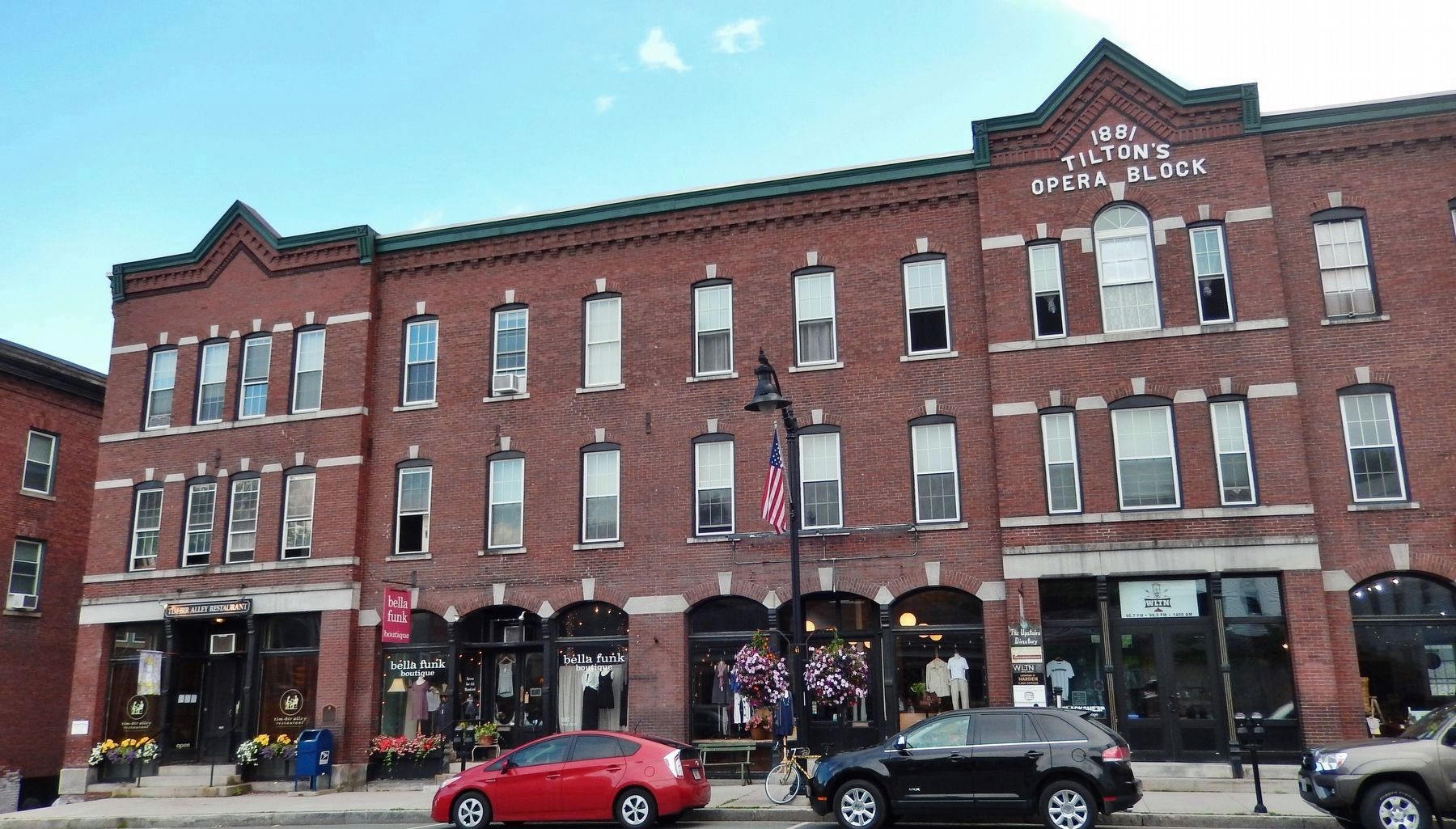