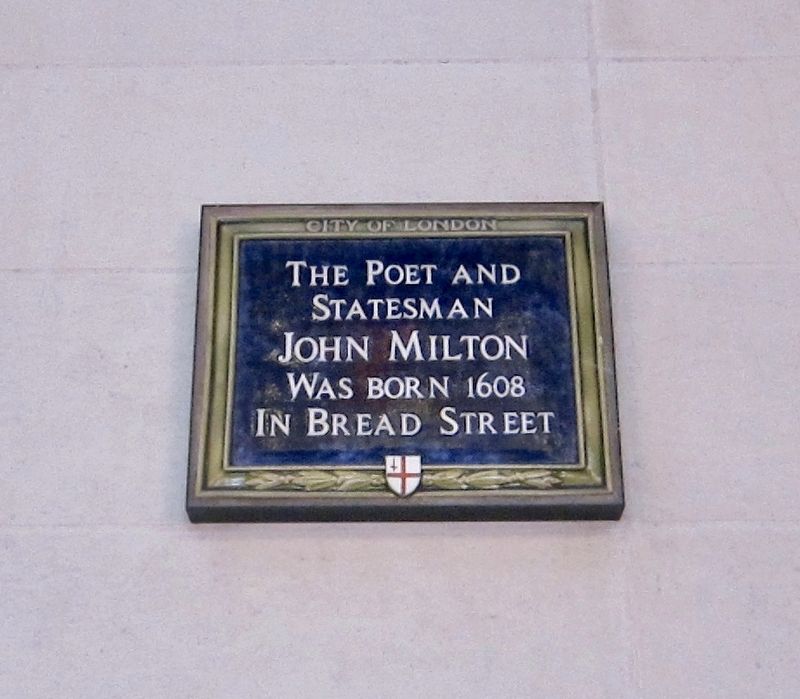 Photographed By Andrew Ruppenstein, March 17, 2018
1. John Milton Marker
Inscription.
John Milton. .
The Poet and Statesman John Milton was born 1608 in Bread Street. . This historical marker was erected by City of London Corporation. It is in City of London in Greater London England United Kingdom

Topics and series. This historical marker is listed in these topic lists: Arts, Letters, Music • Government & Politics. In addition, it is included in the UK, England, City of London Corporation series list. A significant historical date for this entry is December 9, 1608. 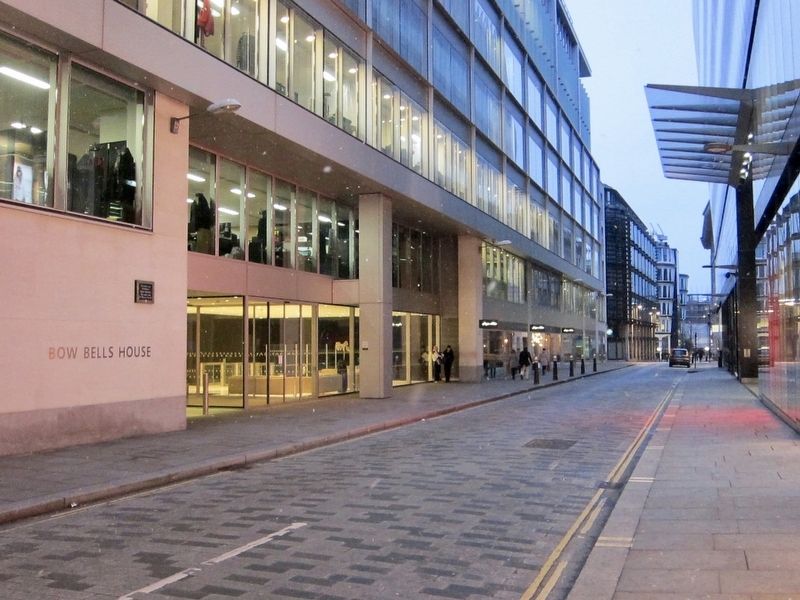 Also see . . .  John Milton (Wikipedia). "John Milton (9 December 1608 – 8 November 1674) was an English poet, polemicist, man of letters, and civil servant for the Commonwealth of England under Oliver Cromwell. He wrote at a time of religious flux and political upheaval, and is best known for his epic poem Paradise Lost (1667), written in blank verse....Milton's poetry and prose reflect deep personal convictions, a passion for freedom and self-determination, and the urgent issues and political turbulence of his day. Writing in English, Latin, Greek, and Italian, he achieved international renown within his lifetime, and his celebrated Areopagitica (1644), written in condemnation of pre-publication censorship, is among history's most influential and impassioned defences of free speech and freedom of the press....William Hayley's 1796 biography called him the "greatest English author", and he remains generally regarded "as one of the preeminent writers in the English language", though critical reception has oscillated in the centuries since his death (often on account of his republicanism). Samuel Johnson praised Paradise Lost as "a poem which...with respect to design may claim the first place, and with respect to performance, the second, among the productions of the human mind", though he (a Tory and recipient of royal patronage) described Milton's politics as those of an 'acrimonious and surly republican'." (Submitted on April 16, 2018.)
Credits. This page was last revised on January 27, 2022. It was originally submitted on April 16, 2018, by Andrew Ruppenstein of Sacramento, California. This page has been viewed 114 times since then and 18 times this year. Photos:   1, 2. submitted on April 16, 2018, by Andrew Ruppenstein of Sacramento, California.
Share this page.