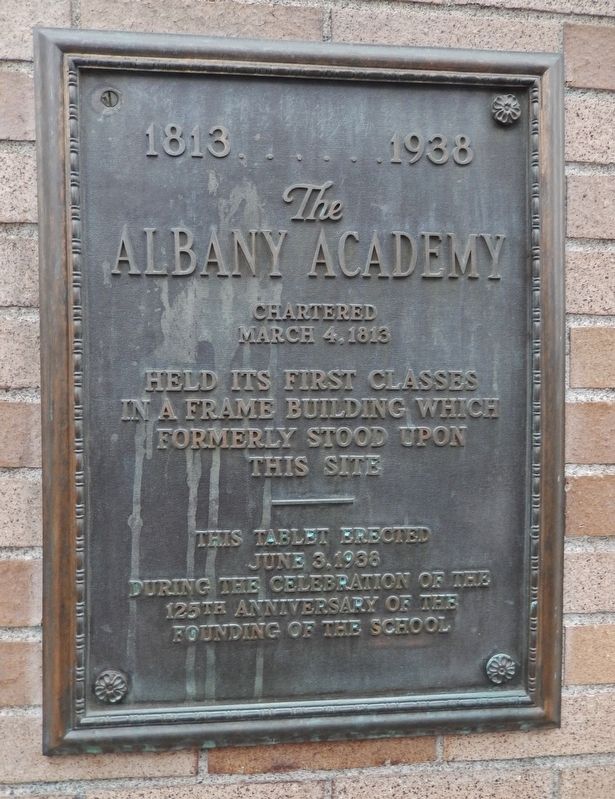 By Cosmos Mariner, July 12, 2017
1. The Albany Academy Marker
Inscription.
The Albany Academy. 1813...1938.
Chartered March 4, 1813 Held its first classes in a frame building which formerly stood upon this site This tablet erected June 3, 1938 during the Celebration of the 125th Anniversary of the founding of the school . . This historical marker was erected in 1938. It is in Albany in Albany County New York

This tablet erected
June 3, 1938
during the Celebration of the
125th Anniversary of the
founding of the school 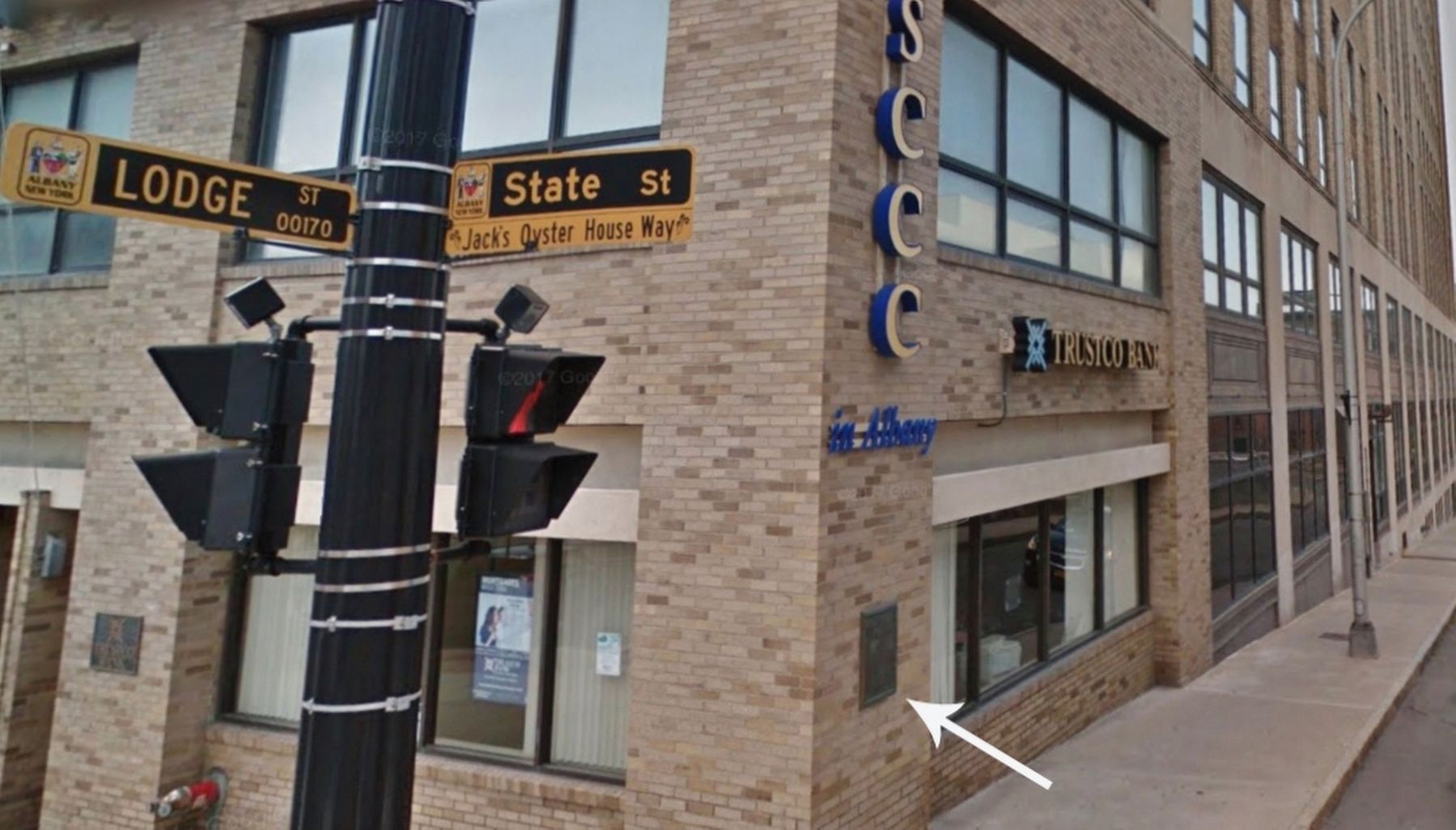 Also see . . .  The Albany Academy.
The Albany Academy is the oldest boys day school in the New York Capital Region, chartered in March 1813 to educate the sons of Albany's political elite and rapidly growing merchant class. In the Census three years prior, Albany was the tenth-largest city in the United States, and would remain so through the 1850s due to the prominence of the Erie Canal. (Submitted on April 23, 2018, by Cosmos Mariner of Cape Canaveral, Florida.) 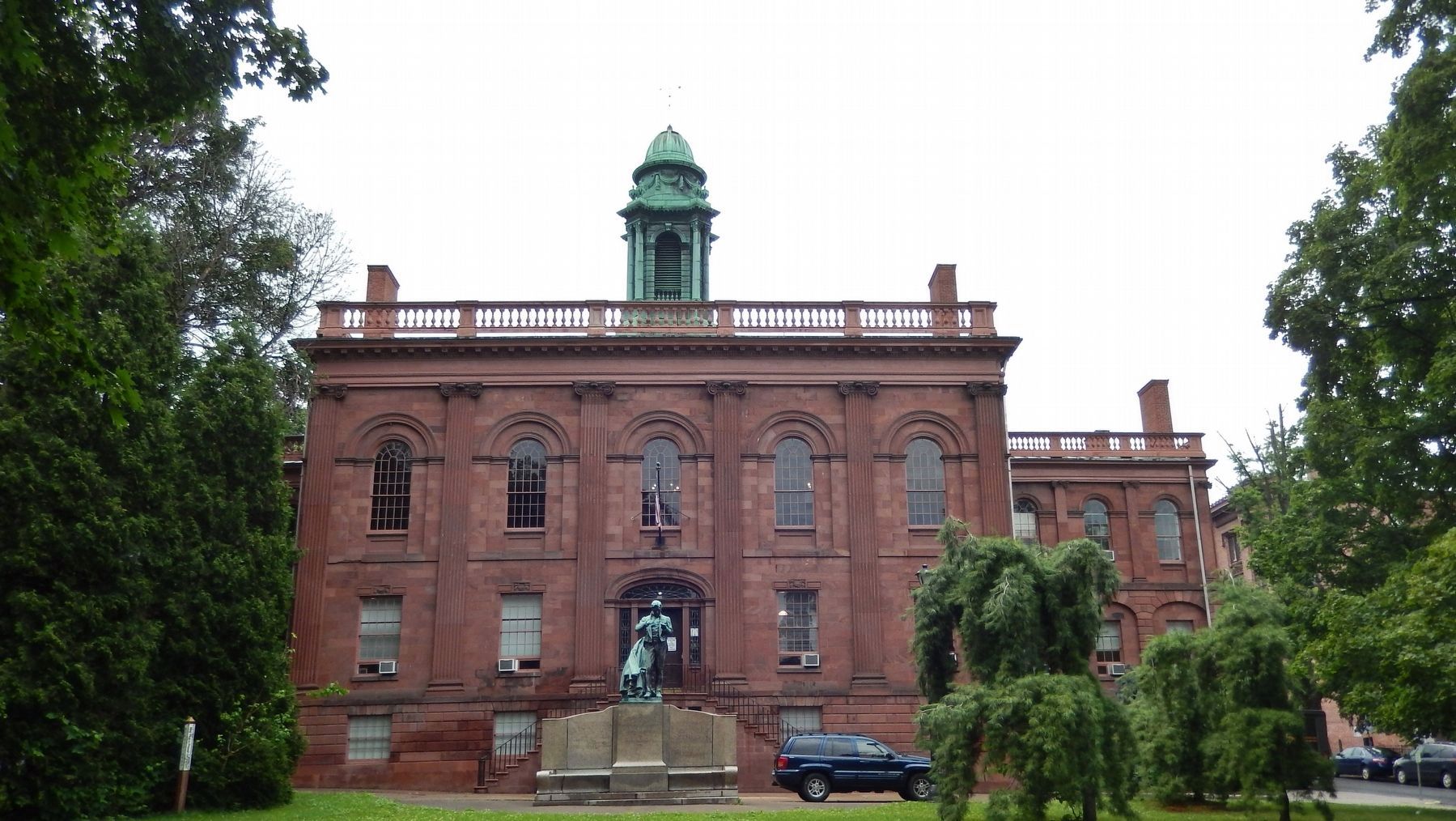 By Cosmos Mariner, July 12, 2017
3. Albany Academy Buliding - 1817
In 1815, Philip Hooker, then Albany's most prominent architect, appeared before the school's building committee. He had at that point already designed the nearby City Hall and State Capitol buildings (both since replaced), and pointed to his years of experience and his "close application in the research of ancient and modern architecture." Mayor Philip S. Van Rensselaer laid the building's cornerstone after Hooker got the commission. This new Albany Academy building was opened in 1817. For the remainder of the 19th century, the school stayed in Hooker's building, Later in the 1930s, the Albany City School District moved into the building and has used it as its main offices ever since.
Credits. This page was last revised on April 24, 2018. It was originally submitted on April 23, 2018, by Cosmos Mariner of Cape Canaveral, Florida. This page has been viewed 114 times since then and 27 times this year. Photos:   1, 2, 3. submitted on April 23, 2018, by Cosmos Mariner of Cape Canaveral, Florida. • Andrew Ruppenstein was the editor who published this page.
Share This Page.