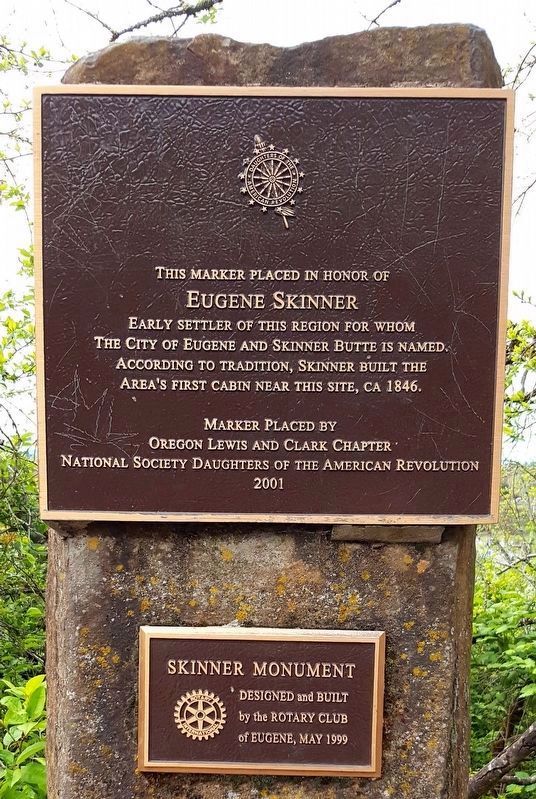 By Douglass Halvorsen, April 20, 2018
1. Eugene Skinner Marker
This Stone Marker is listed on a historical marker map within Skinner Butte Park, a short distance north of this marker.
Inscription.
Eugene Skinner. .
Early Settler of This Region For Whom The City of Eugene and Skinner Butte is Named. According to Tradition, Skinner Built the Area’s First Cabin Near This Site, ca 1846.. . This historical marker was erected in 2001 by Oregon Lewis and Clark Chapter National Society Daughters of the American Revolution; Rotary Club of Eugene. It is in Eugene in Lane County Oregon

Early Settler of This Region For Whom
The City of Eugene and Skinner Butte is Named.
According to Tradition, Skinner Built the
Area’s First Cabin Near This Site, ca 1846. 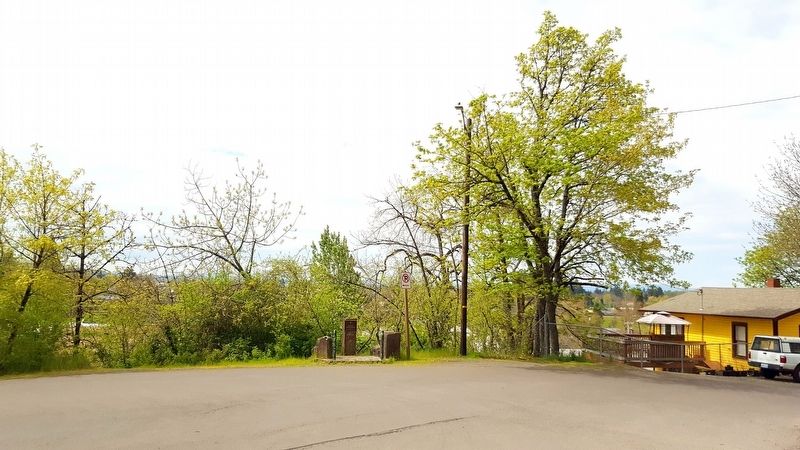 Eugene F. Skinner, whose name is a household word throughout the length and breadth of Lane county, located in June, 1846, the Donation claim on which Eugene City, named for him, now stands. He was born at Essex, Essex county, New York, September 13, 1809, and is the youngest son of Major John Joseph Skinner of East Windsor, Connecticut, and a brother of St. John B.L. Skinner of New York, who was an influential officer in the Postoffice Department at Washington City, District of Columbia, under President Lincoln, and first assistant postmaster-general under President Johnson.

He married in Illinois, November 28, 1839, Mary Cook, who was born in Augusta, Oneida county, New York, February 7, 1816. While a resident of Illinois, he was elected to several official 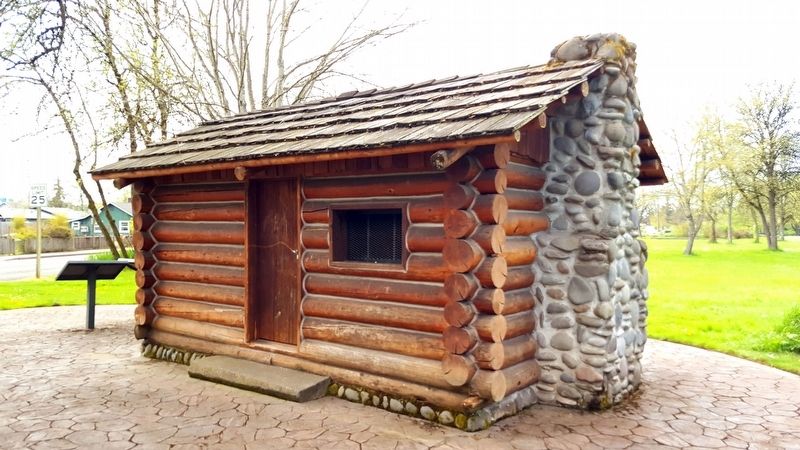 By Douglass Halvorsen, April 20, 2018
3. Eugene Skinner Replica Cabin
This replica cabin is located in Skinner Butte Park, a short distance north of this marker site.
positions, among them being sheriff of Putnam county. Owing to certain inducements held out to him, and hoping to regain his lost health, in May, 1845, he and his wife, joined a large company who were going to California, among the number being Felix Scott, Wesley Shannon and Elijah Bristow. They arrived at the hospitable portals of Sutter’s fort in September, 1845. There they wintered, and in the spring of 1846 journeyed to Oregon. Mr. Skinner stopped in Dallas, Polk county, until in May, 1847, he turned his face southward and took up his residence on the claim which he had previously located, erecting a log cabin at the west side of Skinner Butte, where Mrs. Skinner reigned as the first and only lady in Lane county. Theirs was certainly far from being a bed of roses. The Indians in the vicinity took umbrage at the white man thus locating in their midst; and several times they sought to destroy the family. Mr. Skinner kept watch and ward with an old musket, while Mrs. Skinner made bullets. Nevertheless, after many days of fear and anxiety, no dire deed of vengeance was perpetrated.

In early times Eugene F. Skinner was clerk of the courts, and was for many years postmaster at Eugene City. He also attended to law business for a large number of the settlers of Lane County. He was industrious and honest, was a first-class business man, and enjoyed the esteem and confidence 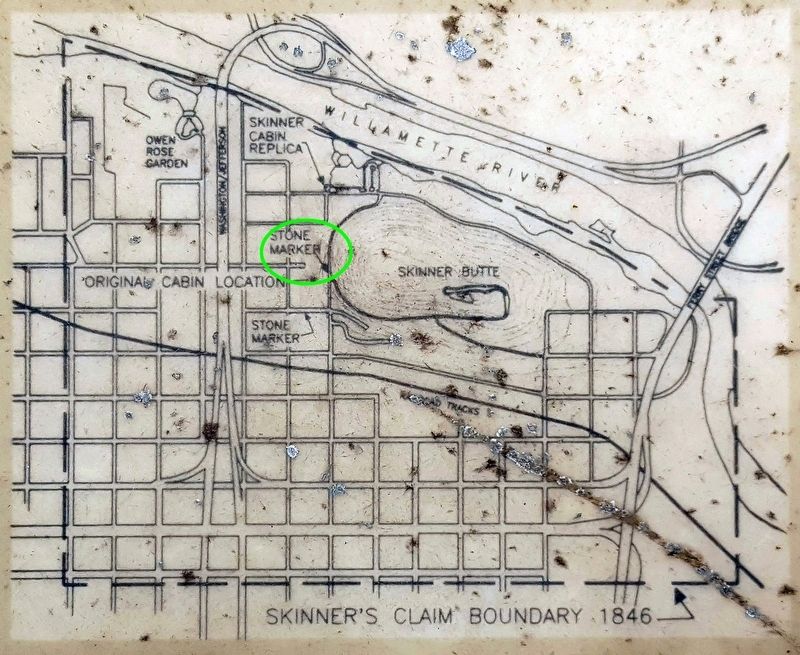 By Douglass Halvorsen, April 20, 2018
4. Skinner Butte Park historical marker map
A historical marker map lists this stone marker and is located within Skinner Butte Park, a short distance north of this marker site.
of everybody. Mr. Skinner was a good man in the true sense of the word. he was a most estimable, public-spirited citizen, a kind husband, a fond and indulgent parent, and a dear and prized friend to a large number of state and county residents. Hundreds of needy, destitute emigrants, from the time of his first settlement in Oregon, until the last few weeks of his life, found in him a provider and friend; and his charities were freely extended wherever he knew that want prevailed. All in all, he was a man of noble impulses and most modest demeanor. His death was a calamity to the community of Eugene City; and he was deeply mourned by all. a cold which he had contracted little heeded at the time, was in four days the cause of his sudden death. The Masons and Odd Fellows of both of which orders he was a worthy member, conducted his obsequies on the 17th of December, 1864. Peace to the ashes of Eugene F. Skinner.

When the town was first laid out, Mary Skinner was awarded the honor of giving a name to the place; and she christened the embryo town Eugene, her former husband’s first name. She was a lady of many virtues, kind and charitable, ever ready to assist the needy and alleviate the sufferings of the unfortunate. 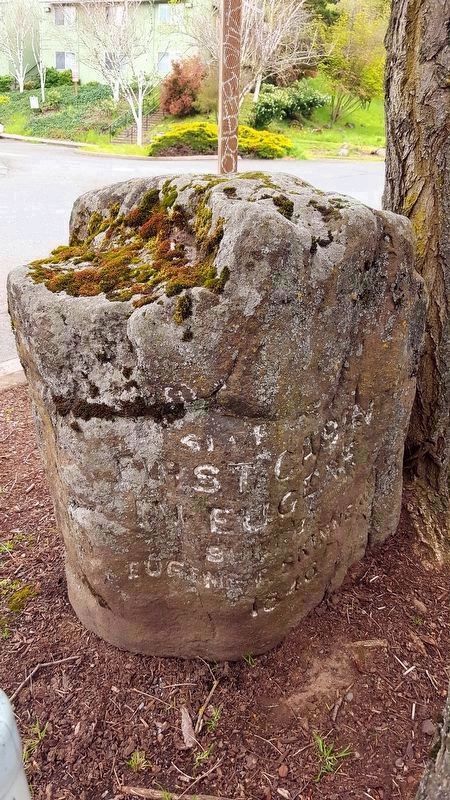 By Douglass Halvorsen, April 20, 2018
5. Site of First Cabin in Eugene stone marker
This stone marker is located along W 2nd Ave, a short distance south of the Eugene Skinner memorial marker. It notes the First Log Cabin site built by Eugene F. Skinner in 1846. The actual log cabin site was between this memorial site and the stone marker to the south, as noted on a historical marker map located at Skinner Butte Park and in front of the Skinner replica cabin.