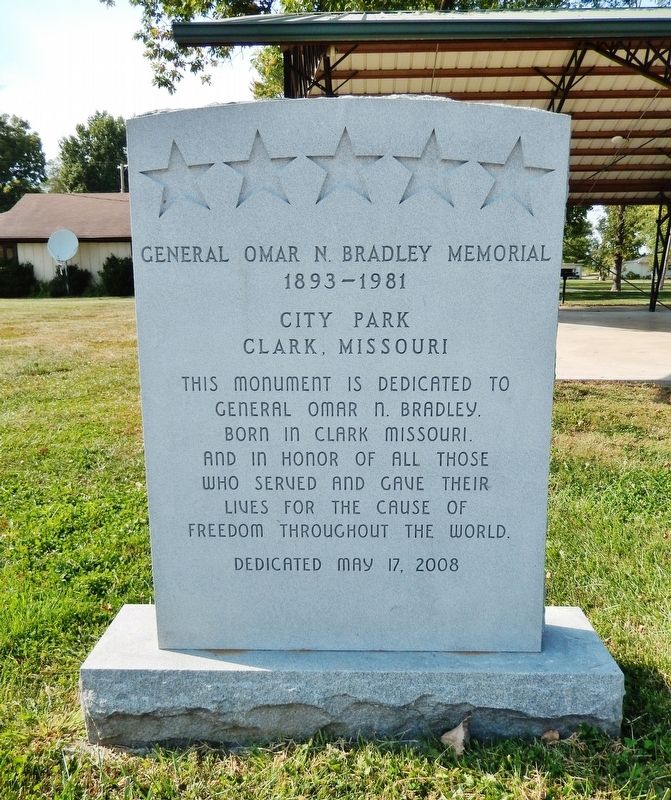 This monument is dedicated to
General Omar N. Bradley,
born in Clark, Missouri,
and in honor of all those
who served and gave their
lives for the cause of
freedom throughout the world.

Erected 2008 by City of Clark, Missouri.

Location. 39° 16.843′ N, 92° 20.584′ W. Marker is in Clark, Missouri, in Randolph County. Memorial is on Main Street east of Hubbard Street, on the left when traveling east. Marker is located on the grounds of Sayre Memorial Park, near the southwest corner, by the sidewalk. Touch for map. Marker is at or near this postal address: 400 Main Street, Clark MO 65243, United States of America. Touch for directions.

Other nearby markers. At least 2 other markers are within 12 miles of this marker, measured as the crow flies. Moberly (approx. 10.8 miles away); The Civil War in Centralia (approx. 11.9 miles away).

Regarding General Omar N. Bradley Memorial. The Army rank of 5 Star General is only specifically 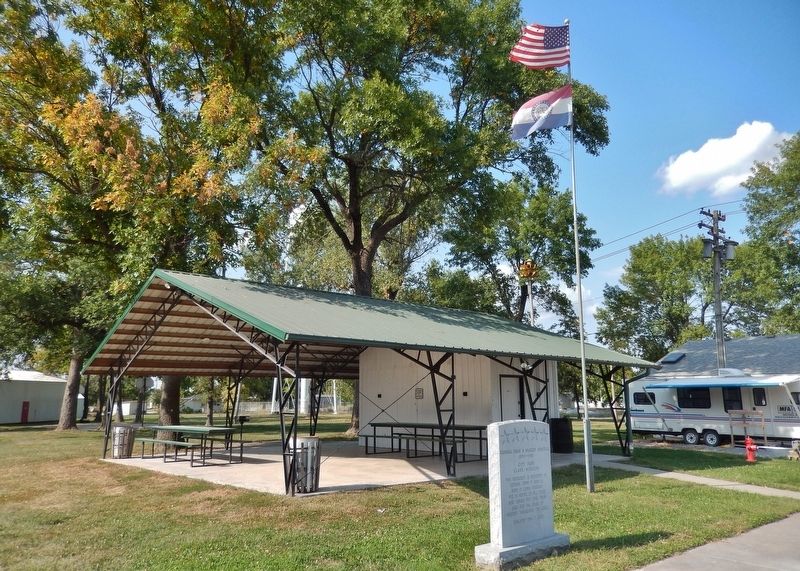 By Cosmos Mariner, September 9, 2017
2. General Omar N. Bradley Memorial Marker (wide view)
handed out at wartime during the most extreme of circumstances. The last Five-Star rank was held by General Omar Bradley until his death in 1981. There have been only 4 other 5 Star Army Generals: George C. Marshall, Douglas MacArthur, Dwight D. Eisenhower, and Henry H. Arnold.

Also see . . .
1. Omar N. Bradley.
Omar Nelson Bradley (1893-1981) was one of the towering American military leaders of the first half of the 20th century. After serving as an infantry school instructor, the West Point graduate took charge of the Eighty-second and Twenty-eighth Divisions during World War II. He commanded the Second Corps in the Tunisia and Sicilian campaigns, and as commander of the First Army he was instrumental to the success of the Normandy campaign. Bradley was appointed to head the Veterans Administration after the war, and at the end of his career he became a five-star general and the first-ever chairman of the Joint Chiefs of Staff. (Submitted on April 27, 2018, by Cosmos Mariner of Cape Canaveral, Florida.)