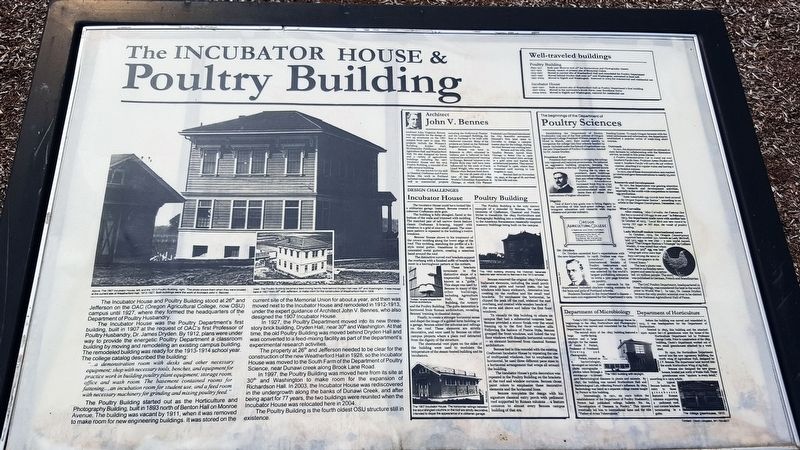 The Incubator House and Poultry Building stood at 26th and Jefferson on the OAC (Oregon Agricultural College, now OSU) campus until 1927, where they formed the headquarters of the Department of Poultry Husbandry.
The Incubator House was the Poultry Department's first building, built in 1907 at the request of OAC’s first Professor of Poultry Husbandry, Dr. James Dryden. By 1912, plans were under way to provide the energetic Poultry Department a classroom building by moving and remodeling an existing campus building. The remodeled building was ready for the 1913-1914 school year. The college catalog described the building:
“...a demonstration room with desks and other necessary equipment; shop with necessary tools, benches, and equipment for practice work in building poultry plant equipment; storage room, office and wash room. The basement contained rooms for fattening..., an incubation room for student use, and a feed room with necessary machinery for grinding and mixing poultry feed.”
The Poultry Building started out as the Horticulture and Photography Building, built in 1893 north of Benton Hall on Monroe 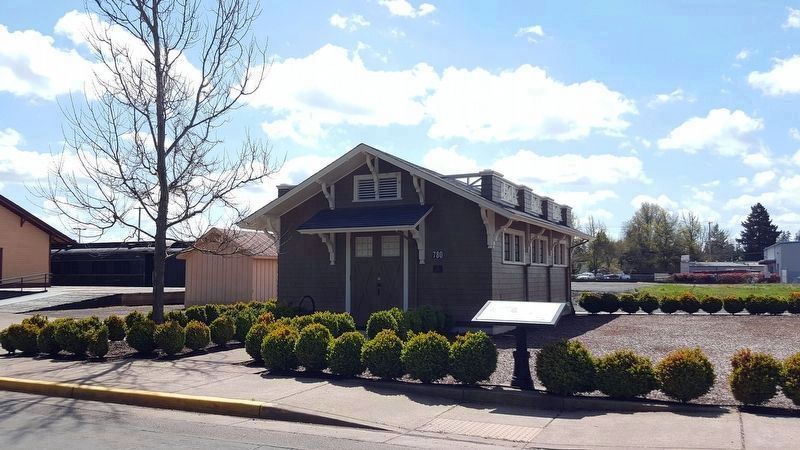 Photographed By Douglass Halvorsen, April 21, 2018
2. The Incubator House & the Marker

Click or scan to see
this page online
Avenue. The building was vacant by 1911, when it was removed to make room for new engineering buildings. It was stored on the current site of the Memorial Union for about a year, and then was moved next to the Incubator House and remodeled in 1912-1913, under the expert guidance of Architect John V. Bennes, who also designed the 1907 Incubator House.
In 1927, the Poultry Department moved into its new three-story brick building, Dryden Hall, near 30th and Washington. At that time, the old Poultry Building was moved behind Dryden Hall and was converted to a feed-mixing facility as part of the department's experimental research activities.
The property at 26th and Jefferson needed to be clear for the construction of the new Weatherford Hall in 1928, so the Incubator House was moved to the South Farm of the Department of Poultry Science, near Dunawi creek along Brook Lane Road.
In 1997, the Poultry Building was moved here from its site at 30th and Washington to make room for the expansion of Richardson Hall. In 2003, the Incubator House was rediscovered in the undergrowth along the banks of Dunawi Creek, and after being apart for 77 years, the two buildings were reunited when the Incubator House was relocated here in 2004.
The Poultry Building is the fourth oldest OSU structure still in existence. 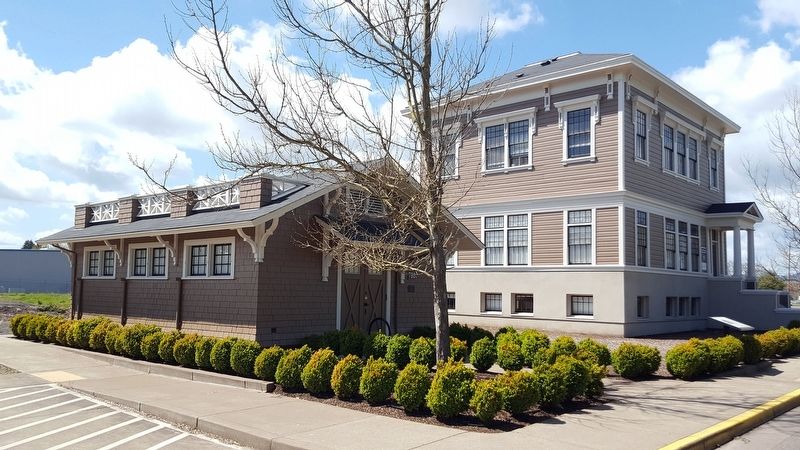 Photographed By Douglass Halvorsen, April 21, 2018
3. The Incubator House & Poultry Building
Building
1893-1911 Built near Monroe and 16th for Horticulture and Photography classes
1911-1912 Stored, vacant, at present site of Memorial Union
1913-1927 Moved to current site of Weatherford Hall and remodeled for Poultry Department
1927-1997 Moved behind Dryden Hall near 30th and Washington, converted to feed mill
1997-2005 Moved to Eighth and Washington. Restored in 2005 for commercial and residential use
Incubator House
1907-1927 Built at current site of Weatherford Hall as Poultry Department’s first building
1927-2004 Moved to the University’s South Farm, near Brooklane Drive
2004-2005 Moved to Eighth and Washington, restored for residential use
Architect John V. Bennes
Architect John Virginius Bennes was responsible for the design of over 35 structures on the OSU campus from 1907 to 1939. His projects include the Women’s Building, Kidder Hall, McAlexander Fieldhouse, Strand Agriculture Hall and Weatherford Hall. He also designed six barns and a variety of agricultural buildings, including the 1907 Incubator House and the 1913 Poultry Building, a remodel of an 1883 campus building.
He was known for his skill in Classical, Craftsman and Prairie Styles. His work in Portland included outstanding residences as well as commercial projects including the Hollywood Theater and the Lowengart Building, 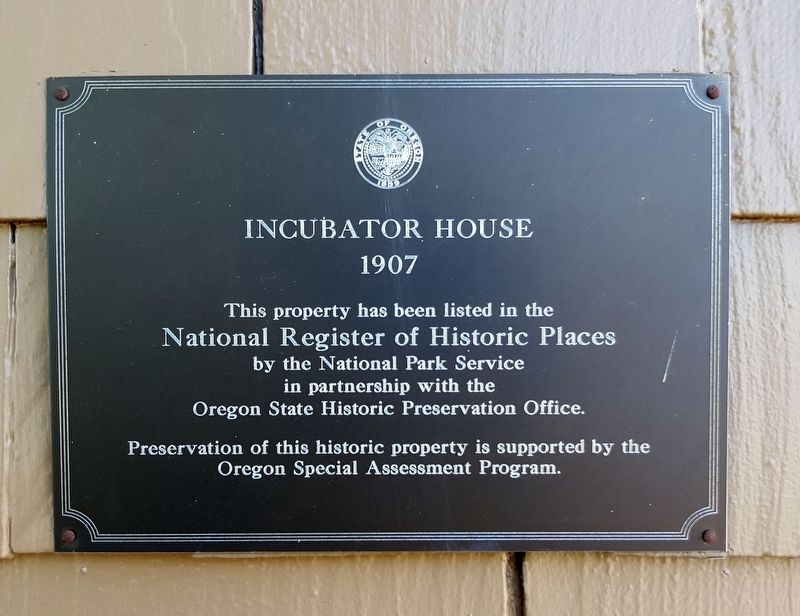 Photographed By Douglass Halvorsen, April 21, 2018
4. The Incubator House NRHP plaque
Incubator House
1907
This property has been listed in the
National Register of Historic Places
by the National Park Service
in partnership with the
Oregon State Historic Preservation Office.

Preservation of his historic property is supported by the
Oregon Special Assessment Program.
the first in Portland to be built with reinforced concrete. Many of his projects are listed on the National Register of Historic Places.
Bennes was born in Bohemia in 1867, educated in Indiana and is believed to have received his architectural training in Chicago. Bennes’ interest in the Prairie Style may well have been influenced by the work of Frank Lloyd Wright, who was active in Illinois when Bennes lived there.
He was 26 years old at the time of the influential 1893 World’s Columbian Exposition in Chicago, at which City Planner Frederick Law Olmstead introduced the City Beautiful Movement. Olmstead’s firm later came to Corvallis to design a campus master plan for the college, during the time Bennes was working here.
Bennes and his wife, Alice Smalley Bennes, moved from Chicago to Baker City in 1900 where they invested their savings in a gold mine and started his architectural practice. They moved to Portland in 1906, where they remained until moving to Los Angeles in 1943.
Bennes died on November 29, 1943, at the age of 76, survived by his wife and son.
Design Challenges
Incubator House
The Incubator House could have looked like a utilitarian garage. Instead, Bennes created a coherent Craftsman-style gem
The building is fully shingled, flared at the bottom of the walls and trimmed with molding. The matched pair of 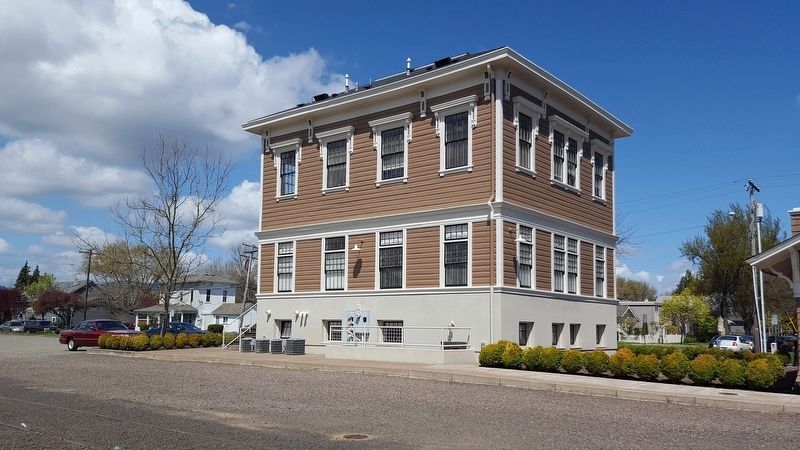 Photographed By Douglass Halvorsen, April 21, 2018
5. Poultry Building
Back side of Poultry Building
tall narrow doors feature classic Craftsman X-bracing, topped with windows in a grid of nine small panes. The nine-pane pattern is repeated in the building’s twelve windows.
Bennes’ finesse shows in his treatment of the crown molding along the lower edge of the roof. This molding, matching the profile of a K-style metal gutter, transitions to the semi-concealed metal gutters, creating a seamless band around the roof.
The distinctive curved roof brackets support the overhang with a finished soffit of boards that meet in a herringbone pattern at the corners.
These brackets terminate in the distinctive shape of a trapezoidal droplet, known as a “gutta.” This shape was used by Bennes in many of his other buildings, including Agriculture Hall, the Dairy Building, the Armory and the Poultry Building. The gutta decoration is borrowed from Roman architecture, revealing Bennes’ training in classical design.
Finally, to create a stronger horizontal sense and dispel the image of a gabled farm building or a garage, Bennes added the columns and railings on the roof. These elements are strictly decorative, and were used by Bennes on other campus projects where a plain roof detracted from the dignity of the structure.
The sheetmetal vent pipes on the sides of the building were used to modulate the temperature of the steam-heated building and its 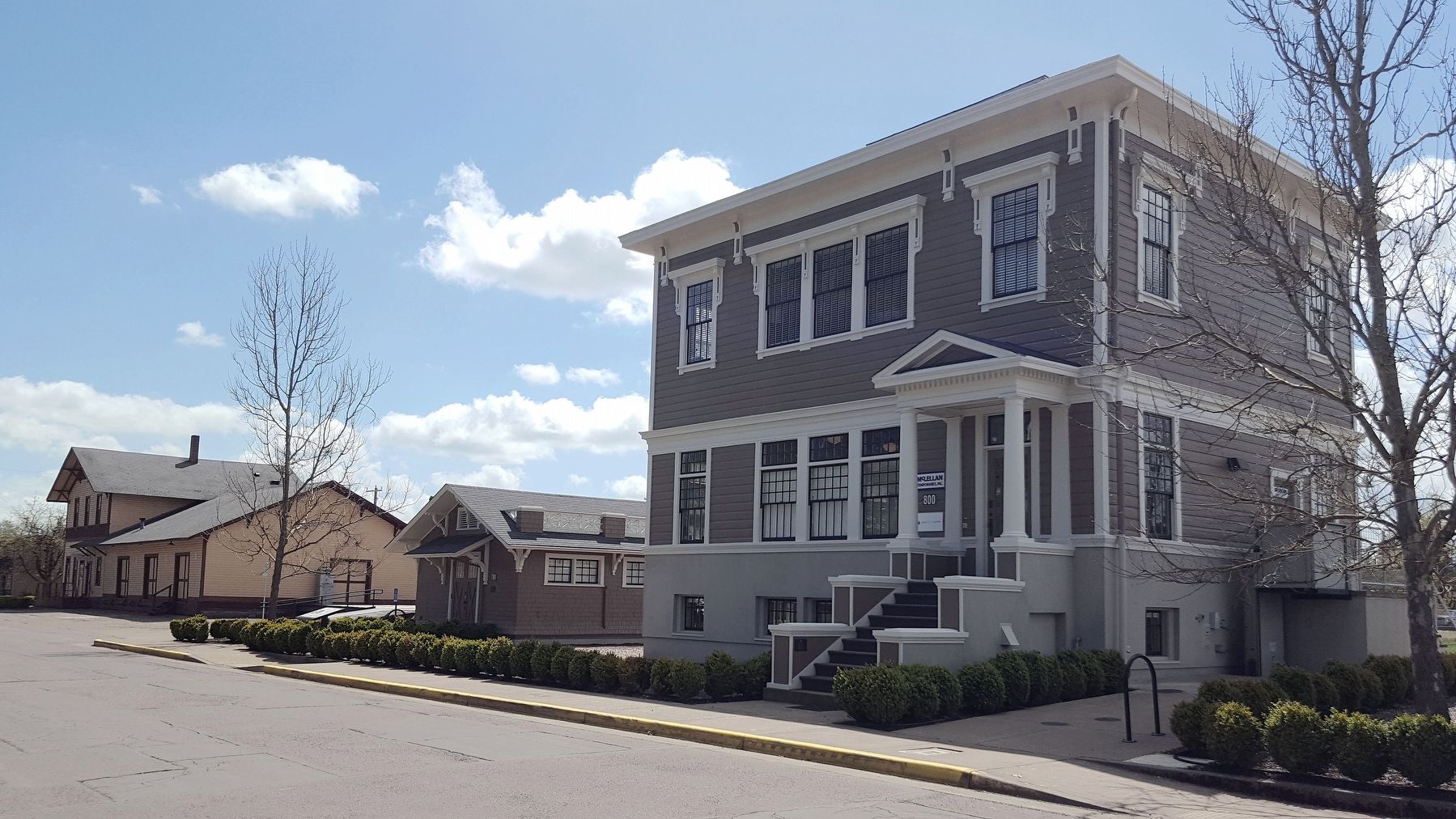 Topics. This historical marker is listed in these topic lists: Education • Horticulture & Forestry. A significant historical date for this entry is November 29, 1943.