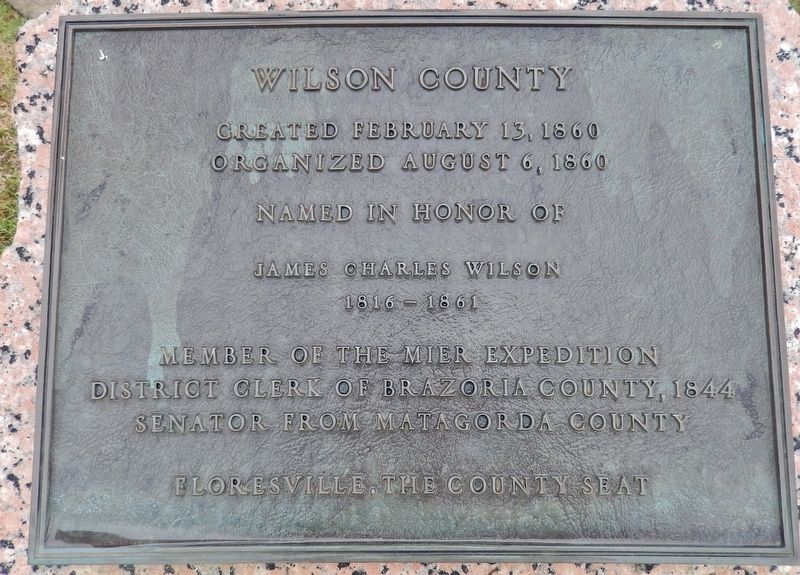 Topics and series. This historical marker is listed in this topic list: Political Subdivisions. In addition, it is included in the Texas 1936 Centennial Markers and Monuments series list.

Location. 29° 7.985′ N, 98° 9.453′ W. Marker is in Floresville, Texas, in Wilson County. Marker is on 3rd Street north of D Street, on the right when traveling north. Marker is located on the west side of the Wilson County Courthouse. Touch for map. Marker is at or near this postal address: 1420 3rd St, Floresville TX 78114, United States of America. Touch for directions.

Other nearby markers. At least 8 other markers are within walking distance of this marker. James Charles Wilson (here, next to this marker); The Flores de Abrego Family and Floresville (here, 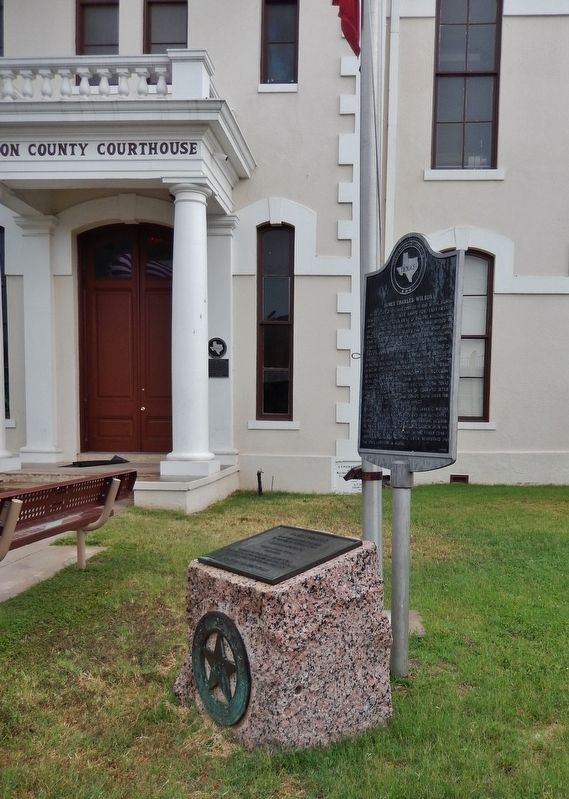 Also see . . .
1. Wilson County. The area that now comprises Wilson County was in the hunting range of Comanche, Tonkawa, and Lipan-Apache Indians. The first Europeans to reach the territory were Spanish explorers, who traveled through the area in the early eighteenth century. In September 1718 Martín de Alarcón crossed the area on his way to explore the bay of Espíritu Santo, and in 1727 Pedro de Rivera y Villalón went north across the territory on his tour of inspection between La Bahía and Bexar. (Submitted on May 23, 2018, by Cosmos Mariner of Cape Canaveral, Florida.)

2. Wilson County, Texas. By the eve of the Civil War Wilson County had a population of 1,500. Because of the emphasis on cattle-raising rather than a plantation economy, the number of slaves 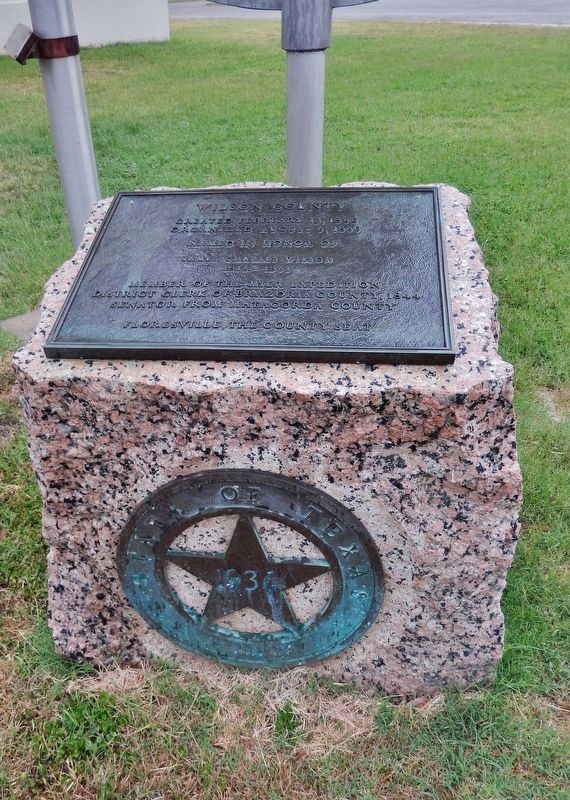 By Cosmos Mariner, May 20, 2018
3. Texas Highway Department 1936 Centennial Star (on front of granite marker pedestal)
remained small; in 1860 there were only a few hundred slaves in the county. Nevertheless, Wilson County residents voted for secession and most actively supported the Confederate cause. Several companies of militia were organized. A protracted period of drought lasting from 1862 to 1865 further compounded wartime hardships. Because of the relatively small number of slaves, however, abolition did not affect the fortunes of Wilson County residents as severely as it did in other counties, and the economy rebounded more quickly than in many other parts of the state. (Submitted on May 23, 2018, by Cosmos Mariner of Cape Canaveral, Florida.)

3. Wilson County, Texas. Fence Cutting Wars in Texas lasted for approximately five years, 1883-1888. The 40,000-acre ranch of Houston and Dilworth became the focal point in Wilson County. As farmers and ranchers began to compete for precious land and water, cattlemen found it more difficult to feed their herds, prompting cowboys to cut through fences. Texas Governor John Ireland prodded a special assembly to order the fence cutters to cease. In response, the legislature made fence-cutting and pasture-burning crimes punishable with prison time, while at the same time regulating fencing. The practice abated with sporadic incidents of related violence 1888. (Submitted on May 23, 2018, by Cosmos Mariner of Cape Canaveral, Florida.) 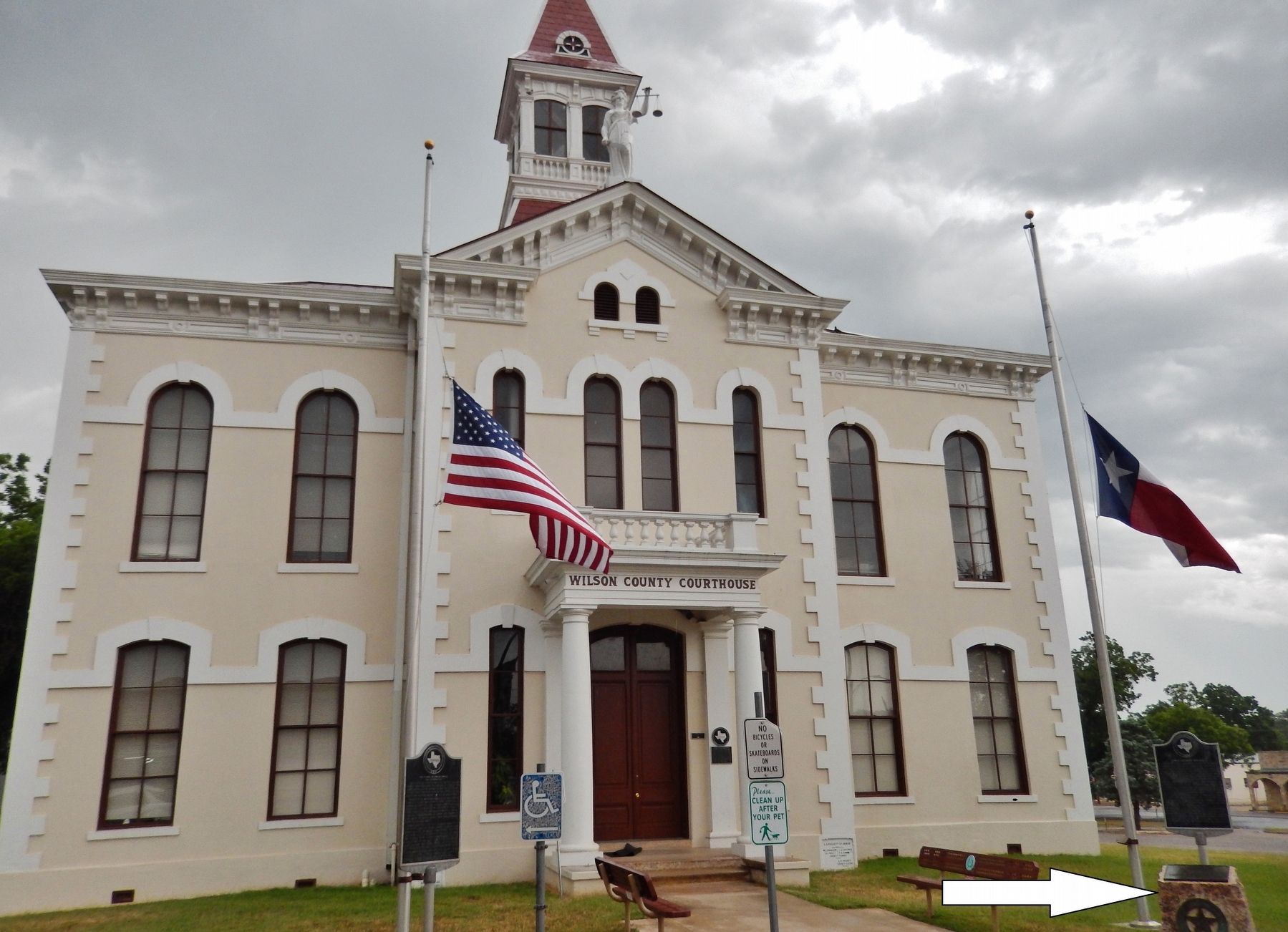