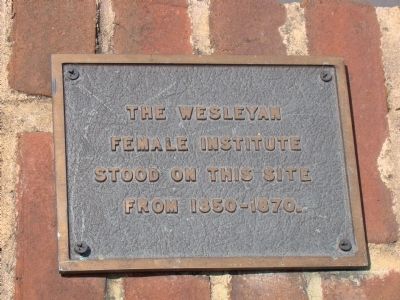 The Wesleyan Female Institute stood on this site from 1850–1870.

Location. 38° 8.963′ N, 79° 4.5′ W. Marker is in Staunton, Virginia. Marker is on West Beverly Street (Virginia Route 254) east of Church Street, on the left when traveling east. Touch for map. Marker is in this post office area: Staunton VA 24401, United States of America. Touch for directions.

Additional comments.
1. Wesleyan Female Institute during the Civil War
During the Federal occupation of Staunton in June 1864, the mayor of Staunton (N.K. Trout) and other members 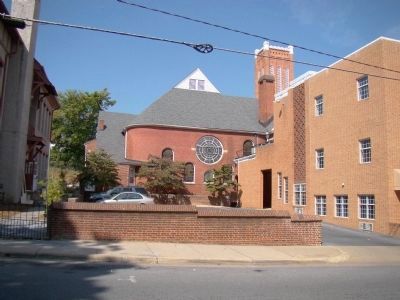 By J. J. Prats, September 24, 2008
2. Site of The Wesleyan Female Institute
Marker is on the brick wall, on the right. Site is across from Trinity Church. The back of the Central United Methodist Church, which faces Lewis Street, is in the distance.
of the town council, with Alexander H.H. Stuart as well as the superintendent of the "lunatic asylum," the principal of the Wesleyan Female Institute and several other prominent men of the town demanded an audience with Col. David Hunter Strother of Genl. David Hunter's staff. While these leaders urged that private property be protected, Strother made it clear that he would adhere to the policies of "warring according to the rules of civilized nations." Private schools and charitable organizations would be protected.
— Submitted March 17, 2009, by Robert H. Moore, II of Winchester, Virginia.