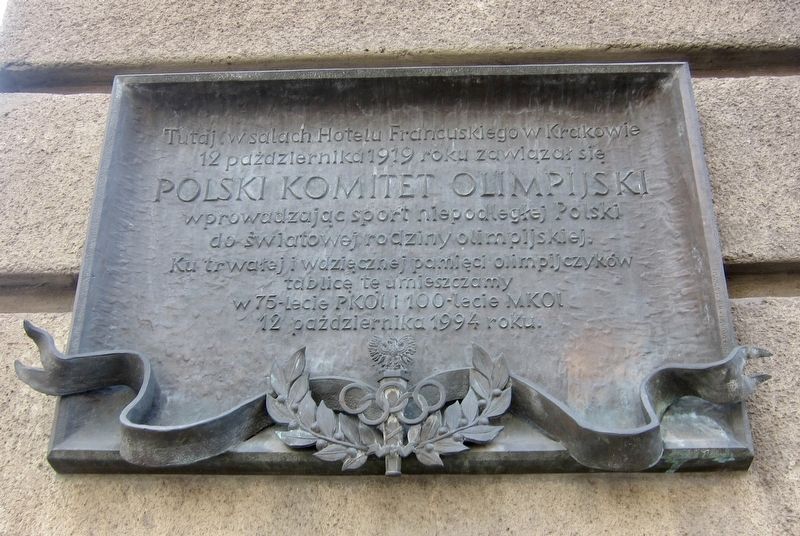 Here, in the halls of the French Hotel of Krawkow,
on the 12th of October, 1919 there gathered
The Polish Olympic Committee,
introducing the sports of an independent Poland
to the world's Olympic family.
To the lasting and grateful memory of the Olympians
this tablet was erected
on the 75th anniversary of the Polish Olympic Committee and the 100th anniversary of the IOC
October 12, 1994. 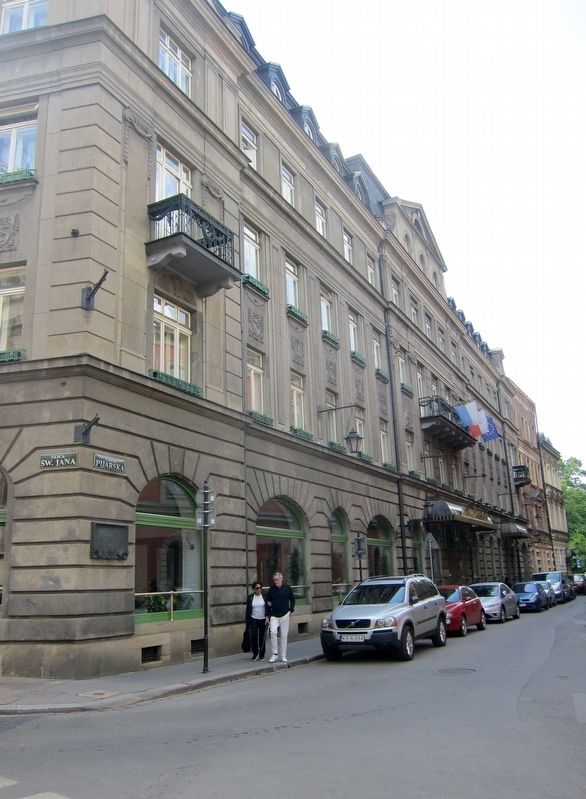 By Andrew Ruppenstein, May 22, 2018
2. Hotel Francuski and The Polish Olympic Committee Marker - Wide View
50° 3.885′ N, 19° 56.378′ E. Marker is in Kraków, Małopolska, in Kraków Powiat. Marker is at the intersection of Pijarska and Świętego Jana, on the left when traveling west on Pijarska. Touch for map. Marker is at or near this postal address: Pijarska 13, Kraków, Małopolska 31-015, Poland. Touch for directions.

Also see . . .  POC History. "The founding convention of the Polish Olympic Committee was held on 12 October 1919 in Hotel Francuski in Kraków. The main goal of the Committee was to send the National Team to the Olympic Games in 1920. Until 1924, the organisation’s official name was the Polish Committee of the Olympic Games. Prince Stefan Lubomirski became its first President, while Józef Piłsudski, the Head of State, took patronage over it....The outbreak of the Polish-Soviet war in 1919 interrupted preparations to the Antwerp Games. Polish Team made its debut at the 1924 Olympic Games in Paris...." (Submitted on June 9, 2018.)
Credits. This page was last revised on June 9, 2018. It was originally submitted on June 9, 2018, by Andrew Ruppenstein of Sacramento, California. This page has been viewed 62 times since then and 7 times this year. Photos:   1, 2. submitted on June 9, 2018, by Andrew Ruppenstein of Sacramento, California.
Share This Page.