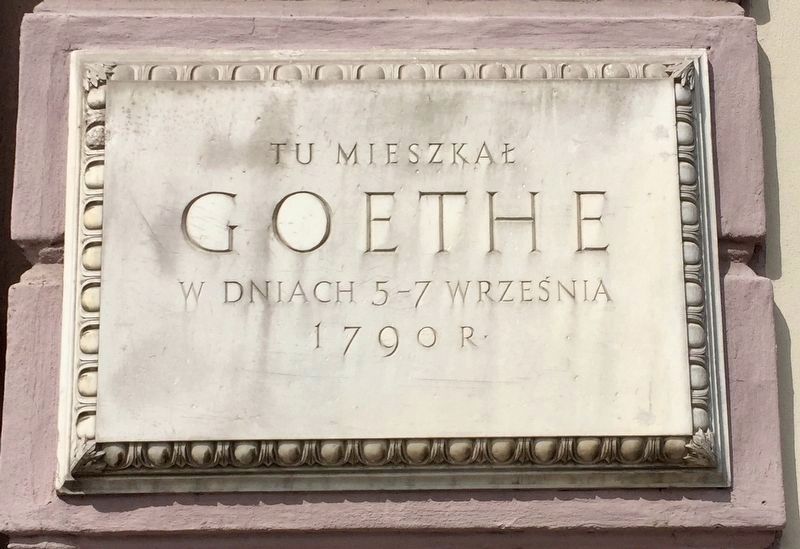 Topics. This historical marker is listed in this topic list: Arts, Letters, Music. A significant historical year for this entry is 1790. 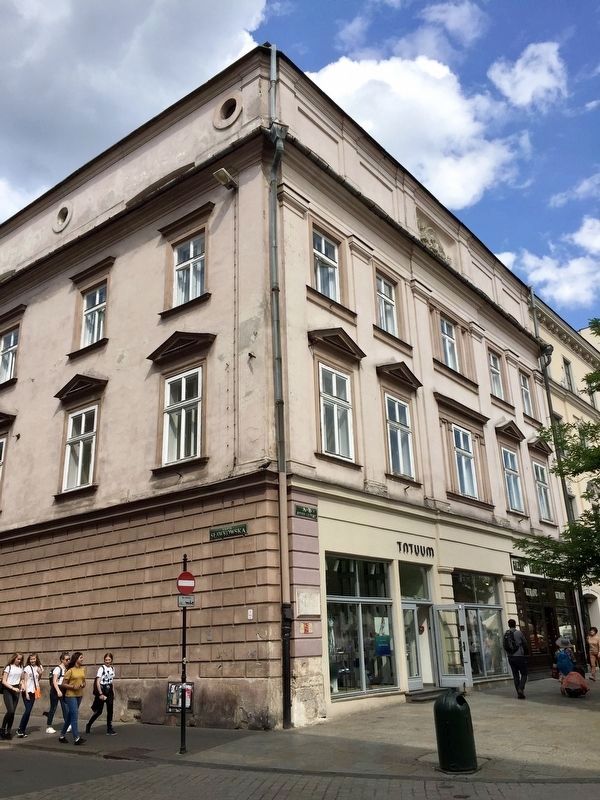 Photographed By Andrew Ruppenstein, May 22, 2018
2. Goethe Marker - Wide View
The marker is visible here on the corner of the building.

Also see . . .
1. Under the Stag Mansion. Krakow Travel website entry:
"This mansion, sometimes referred to as Ludwikowska to honour its 16-century owners, housed the famous Under the Stag Inn where Johann Wolfgang Goethe stayed from 5 to 7 September 1790. The poet cum scientist accompanied the Count de Reden and the Duke of Saxony and Weimar on their travels. Their primary goal was the exploration of the mines of Silesia, yet the gentlemen also visited the salt mine in Wieliczka. Although they only used Kraków as a base camp, a commemoration stone recording the stay of the great poet in our city is mounted into the wall of the house." (Submitted on June 9, 2018.)

2. Johann Wolfgang von Goethe. Wikipedia biography:
"Johann Wolfgang von Goethe (/28 August 1749 – 22 March 1832) was a German writer and statesman. His works include four novels; epic and lyric poetry; prose and verse dramas; memoirs; an autobiography; literary and aesthetic criticism; and treatises on botany, anatomy, and color. In addition, there are numerous literary and scientific fragments, more than 10,000 letters, and nearly 3,000 drawings by him extant....Goethe had a great effect on the nineteenth 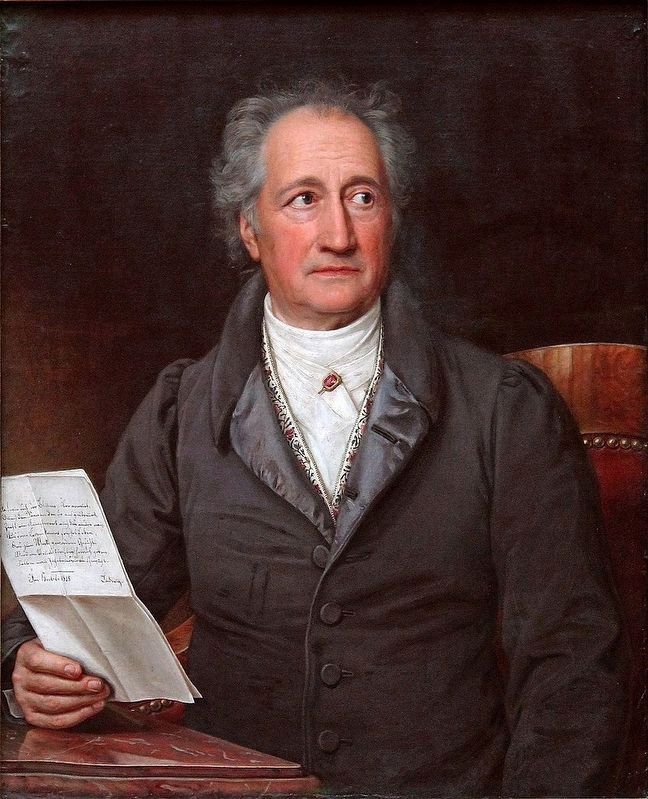 via Wikipedia, 1828
3. Johann Wolfgang von Goethe
Goethe in 1828, by Joseph Karl Stieler
century. In many respects, he was the originator of many ideas which later became widespread. He produced volumes of poetry, essays, criticism, a theory of colours and early work on evolution and linguistics.... His non-fiction writings, most of which are philosophic and aphoristic in nature, spurred the development of many thinkers, including Georg Wilhelm Friedrich Hegel, Schopenhauer, Søren Kierkegaard, Friedrich Nietzsche, Ernst Cassirer, Carl Jung, and Ludwig Wittgenstein. Along with Schiller, he was one of the leading figures of Weimar Classicism. Schopenhauer cited Goethe's novel Wilhelm Meister's Apprenticeship as one of the four greatest novels ever written, along with Tristram Shandy, La Nouvelle Héloïse and Don Quixote." (Submitted on June 9, 2018.)
Credits. This page was last revised on May 2, 2021. It was originally submitted on June 9, 2018, by Andrew Ruppenstein of Sacramento, California. This page has been viewed 144 times since then and 70 times this year. Photos:   1, 2. submitted on June 9, 2018, by Andrew Ruppenstein of Sacramento, California.   3. submitted on May 2, 2021, by Larry Gertner of New York, New York.
Share this page.