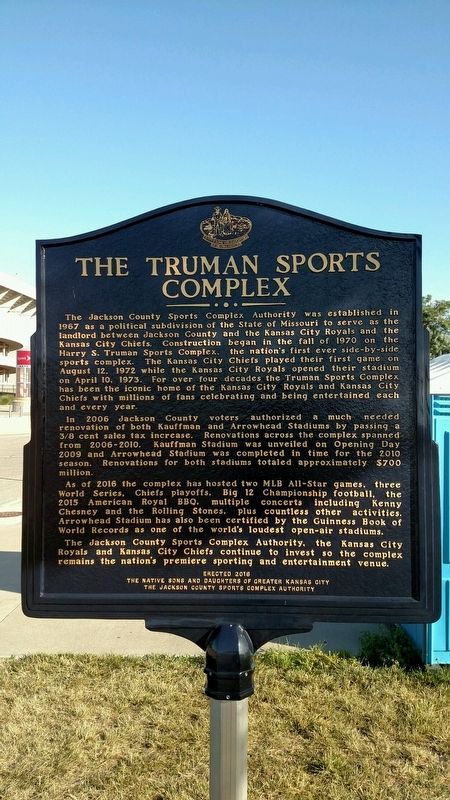 In 2006 Jackson County voters authorized a much needed renovation of both Kauffman and Arrowhead Stadiums by passing a 3/8 cent sales tax increase. Renovation across the complex spanned from 2006-2010. Kauffman Stadium was unveiled on Opening Day 2009 and Arrowhead Stadium was completed in time for the 2010 season. Renovations for both stadiums totaled approximately $700 million.

As of 2016 the complex has hosted two MLB All-Star games, three 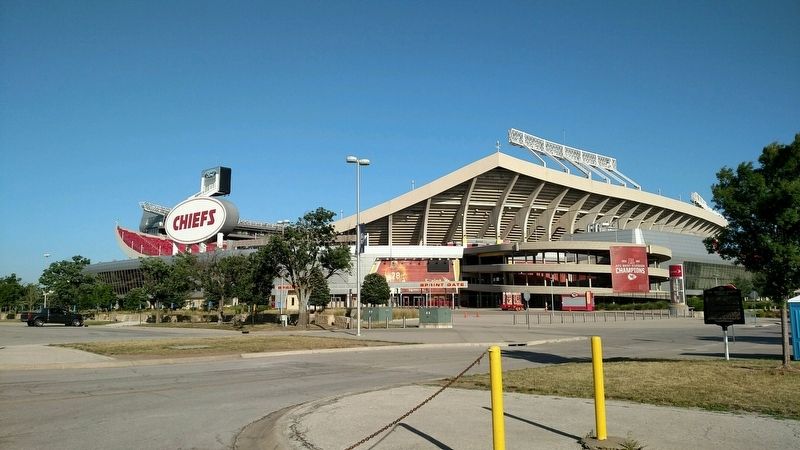 By Mike Wintermantel
2. The Truman Sports Complex Marker
Arrowhead Stadium in the background
World Series, Chiefs playoffs, Big 12 Championship football, the 2015 American Royal BBQ, multiple concerts including Kenny Chesney and the Rolling Stones, plus countless other activities. Arrowhead Stadium has also been certified by the Guinness Book of World Records as one of the world's loudest open-air stadiums.

Topics and series. This historical marker is listed in these topic lists: Entertainment • Sports. In addition, it is included in the Kansas City - Native Sons and Daughters of Greater Kansas City series list.

Location. 39° 2.922′ N, 94° 28.877′ W. Marker is in Kansas City, Missouri, in Jackson County. Marker is at the intersection of Chiefs Way and Red Coat Lane, on the right on Chiefs Way. Located between Lots B & C near Arrowhead Stadium. Touch for map. Marker is in this post office area: Kansas City MO 64129, United States of America. Touch for directions.