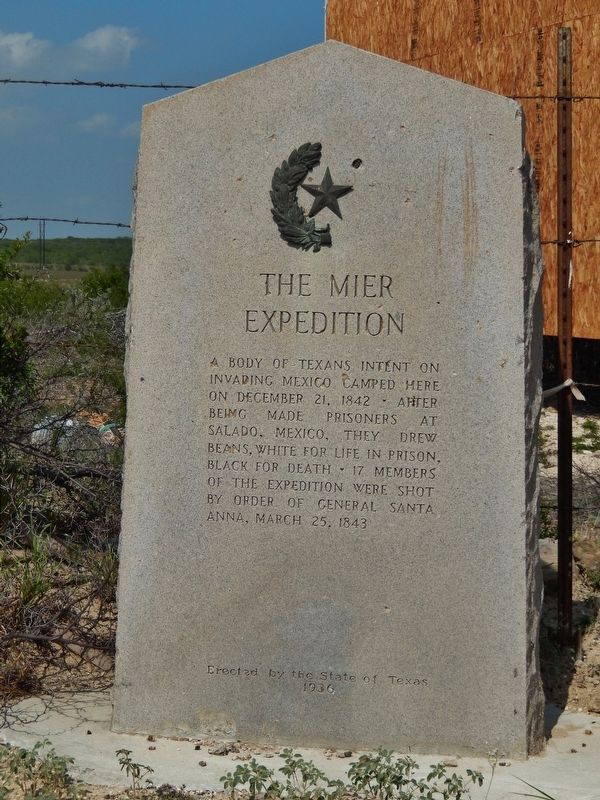 By Cosmos Mariner, May 19, 2018
1. The Mier Expedition Marker
Inscription.
The Mier Expedition. . . A body of Texans intent on invading Mexico camped here on December 21, 1842. After being made prisoners at Salado, Mexico, they drew beans, white for life in prison, black for death. 17 members of the expedition were shot by order of General Santa Anna, March 25, 1843. . This historical marker was erected in 1936 by State of Texas. It is in Roma in Starr County Texas

A body of Texans intent on invading Mexico camped here on December 21, 1842. After being made prisoners at Salado, Mexico, they drew beans, white for life in prison, black for death. 17 members of the expedition were shot by order of General Santa Anna, March 25, 1843.

Other nearby markers. At least 8 other markers are within 13 miles of this marker, measured as the crow flies. Mission Mier a Visita (approx. 2.6 miles away); 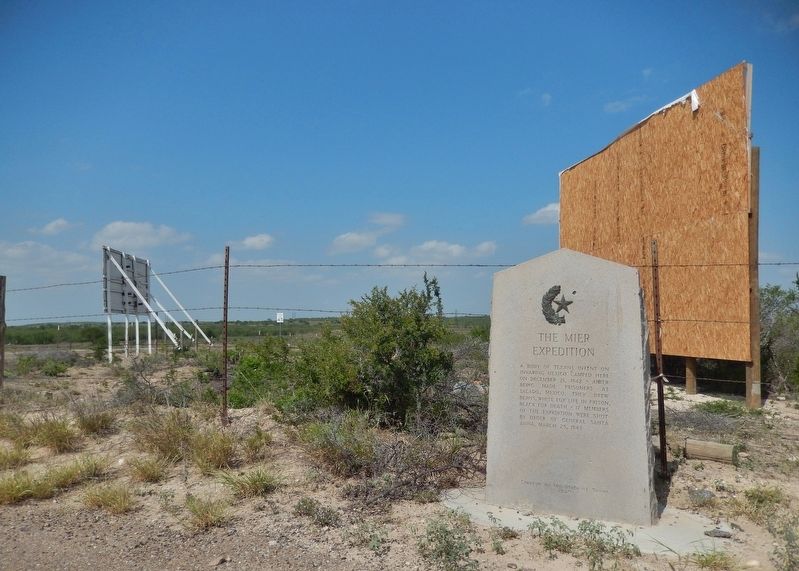 More about this marker. This marker is included in the Texas 1936 Centennial Markers and Monuments marker series.

Also see . . .
1. The Mier expedition. The last of the raiding expeditions from Texas into the area south of the Nueces River during the days of the Republic of Texas, was the most disastrous. Many of the men had reached the conclusion that there was little possibility of accomplishing their objectives of engaging the Mexican Army and of seizing and plundering Mexican towns. Constituting what is known as the Mier expedition, they moved down the Rio Grande to a convenient campsite and selected William S. Fisher as their commander. Some wanted revenge and retaliation; many sought adventure; the leaders were nearly all political opponents of Sam Houston. (Submitted on June 29, 2018, by Cosmos Mariner of Cape Canaveral, Florida.)

2. The Republic of Texas: The Mier Expedition. Fisher and most of the men crossed the Rio Grande and entered the town of Mier, where they demanded supplies from the town, which the town's alcalde promised to deliver. In the meantime, a large detachment of Mexican troops arrived in the town. The two sides engaged in a bloody battle that lasted almost 24 hours. The Texans sustained thirty casualties and ran out of food, water, and ammunition. More than 200 Texans surrendered to Mexican forces. As far as the Mexicans were concerned, the Texans were privateers on an unauthorized raid and entitled to no consideration as military prisoners of war. They were initially sentenced to death, then ordered on a forced march to Mexico City. The Texans tried to make a run back for the border, but they hadn't bargained on the harsh and dry conditions in the mountains. All but three were recaptured. (Submitted on June 29, 2018, by Cosmos Mariner of Cape Canaveral, Florida.)

3. The Black Bean Episode. A decree that all who participated in the break were to be executed was modified to an order to kill every tenth man. The victims were chosen by lottery, each man drawing a bean from an earthen jar containing 176 beans, seventeen black beans being the tokens signifying death. Commissioned officers were ordered to draw first; then the enlisted men were called as their names appeared on the muster rolls. Observers of the drawing later described the dignity, the firmness, the light temper, and general courage of the men who drew the beans of death. Some left messages for their families with their companions; a few had time to write letters home. The doomed men were unshackled from their companions, placed in a separate courtyard, and shot at dusk on March 25, 1843. (Submitted on June 29, 2018, by Cosmos Mariner of Cape Canaveral, Florida.)
Credits. This page was last revised on July 4, 2018. It was originally submitted on June 29, 2018, by Cosmos Mariner of Cape Canaveral, Florida. This page has been viewed 151 times since then and 65 times this year. Photos:   1, 2. submitted on June 29, 2018, by Cosmos Mariner of Cape Canaveral, Florida. • Andrew Ruppenstein was the editor who published this page.
Share This Page.