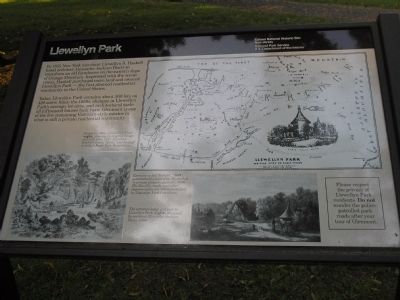 Today, Llewellyn Park contains about 160 lots on 420 acres. Since the 1850s, changes in Llewellyn Park’s acreage, lot sizes, and architectural taste all influenced houses built here. Glenmont is one of the few remaining Victorian-style estates in what is still a private residential community.

Topics. This historical marker is listed in this topic list: Notable Places. A significant historical year for this entry is 1853.

Location. 40° 47.198′ N, 74° 14.408′ W. Marker is in West Orange, New Jersey, in Essex County. Marker is on Honeysuckle Road, on the right when traveling west. Marker is in Edison National Historic Site, located in the Llewellyn Park section of West Orange. Touch for map 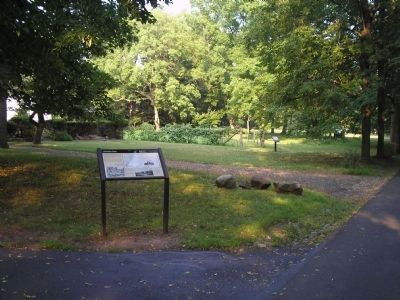 Photographed By Bill Coughlin, July 19, 2008
2. Marker in Edison National Historic Site
The marker is located near Edison's greenhouse and barn. The marker for these can be seen in the background.

Click or scan to see
this page online
. Marker is in this post office area: West Orange NJ 07052, United States of America. Touch for directions.

More about this marker. The upper right of the marker contains a “Prospectus Map of Llewellyn Park, showing its original design and villa sites, 1857. Llewellyn Haskell’s house “Eyrie,” was located in today’s Eagle Rock Reservation. Under this is a picture of “The entrance lodge and gate to Llewellyn Park, designed by architect Alexander Jackson Davis, 1859. The lower left of the marker features a picture of the “Entrance to the “Ramble,” established by Llewellyn Haskell as ‘a private pleasure ground’, 1860. The Ramble, roads, and other improvements are still maintained by Llewellyn Park’s residents.”

Related markers. Click here for a list of markers that are related to this marker. Take a tour of the markers at Thomas Edison's Glenmont homesite.