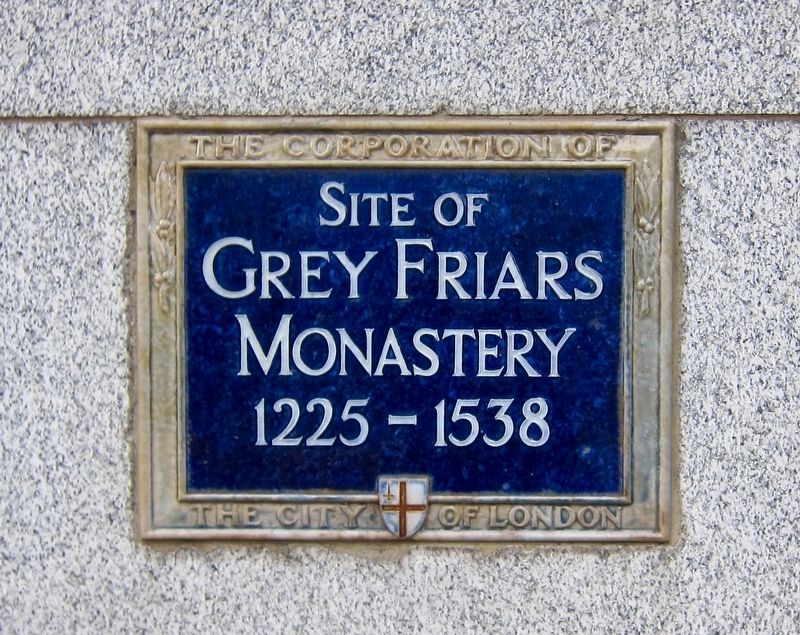 Topics and series. This historical marker is listed in this topic list: Churches & Religion. In addition, it is included in the UK, England, City of London Corporation series list. 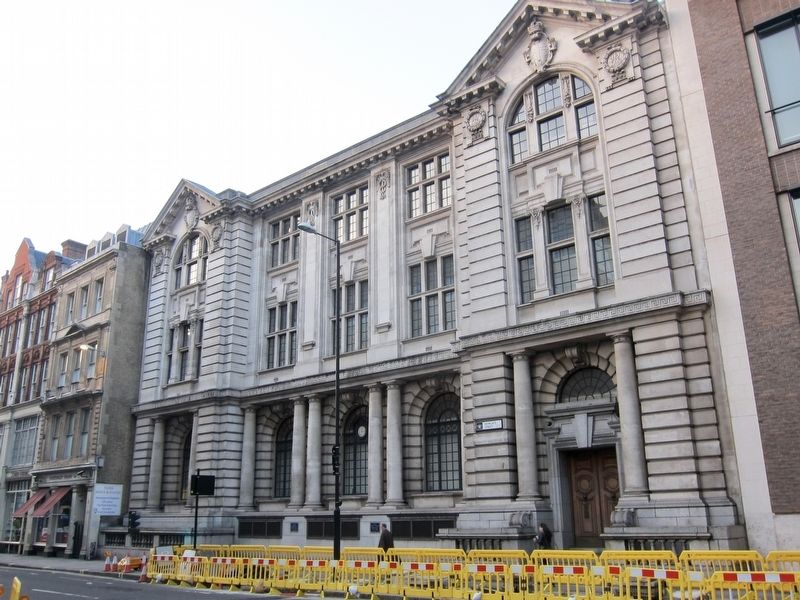 By Andrew Ruppenstein, October 15, 2017
2. Grey Friars Monastery Marker - wide view
Behind the yellow barrier, mounted to the exterior of the building are two blue plaque: the plaque for Grey Friars is on the right, and the plaque for Christ's Hospital on the left.
Mozzagrogna and Caldari War Memorial (about 120 meters away); Charles Lamb (about 120 meters away). Touch for a list and map of all markers in City of London.

Also see . . .  Greyfriars, London (Wikipedia). "In London, the Greyfriars was a Conventual Franciscan friary that existed from 1225 to 1538 on a site at the North-West of the City of London by Newgate in the parish of St Nicholas in the Shambles. It was the second Franciscan religious house to be founded in the country. The establishment included a conventual church that was one of the largest in London; a studium or regional university; and an extensive library of logical and theological texts. It was an important intellectual centre in the early fourteenth century, rivaled only by Oxford University in status. Members of the community at that time included William of Ockham, Walter Chatton and Adam Wodeham. It flourished in the fourteenth and fifteenth century, but was dissolved in 1538 at the instigation of Henry VIII as part of the dissolution of the monasteries. Christ's Hospital was founded in the old conventual buildings, and the church was rebuilt completely by Christopher Wren as Christ Church after the original church was almost completely destroyed in the Great Fire of London. The building currently standing on the site, designed by Arup, is currently occupied by Merrill Lynch International....It was named after the friars' practice of wearing grey habits." (Submitted on July 25, 2018.)
Credits. This page was last revised on July 25, 2018. It was originally submitted on July 25, 2018, by Andrew Ruppenstein of Sacramento, California. This page has been viewed 77 times since then. Photos:   1, 2. submitted on July 25, 2018, by Andrew Ruppenstein of Sacramento, California.
Share This Page.