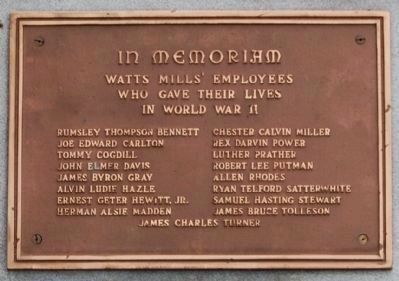 Click or scan to see
this page online
and East Laurens Street on East Public Square. Marker is located in the northeast corner of the courthouse grounds. Touch for map. Marker is in this post office area: Laurens SC 29360, United States of America. Touch for directions. 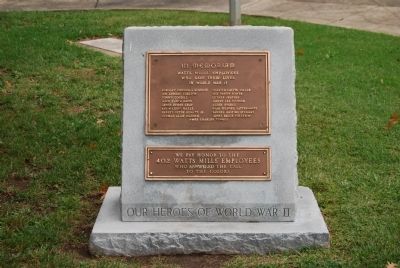 Photographed By Brian Scott, September 27, 2008
3. In Memoriam Marker
1. The Watts Mill
The Watts mills building and the beautiful village of 130 cottages have been constructed within the last six months. This is Laurens', S.C., new $300,000 textile enterprise which, when completed, will manufacture very fine sheetings. The mill building is practically complete, and if no delay occurs in placing the machinery, etc., the whir of 30,000 spindles will be heard on or before January i, 1904. Experts pronounce the construction work and the appointments of the mill the very best to be found in this section. The building is 125 by 580 feet. The weaving department is only one story high, with the cloth, card and picker room on the same floor, while the spinning room will be in the second floor above the card and picker room. Several lots of machinery have been received and a good deal of shafting, etc., placed. The boilers for the big 1000 horse power engine are being installed. A 500 ft. artesian well with a 200,000 gallon daily capacity has just been driven, which will afford water for the boilers and the system of water works to be put in the mill and every cottage and office in the village. Work on the reservoir, which will will be capable of holding 150,000 gallons, is well under way, and a tank which will hold 40,000 gallons has practically been finished. This mill and village are located a mile and a quarter northeast

Photographed By University of North Carolina at Chapel Hill, circa 1910
4. Watts Mill, Laurens, SC
of the city and about three-quarters of a mile from the Laurens cotton mills. The location would be hard to beat. It is a plateau midway between the C.N.&L. and the C.&W.C. railways, and is a portion of a 257-acre tract originally owned by Mr. John B. Watts, deceased, and was conveyed to the Watts Mills Co. by Mr. J. Dunk Watts, who until recently resided at the old homestead and operated successfully one of the finest farms around here. A company store will be built at a convenient point just across the road from the mill. Four nice five-room cottages are yet to be built for the bosses. Mr. W.E. Lucas, who is at the head of the Laurens cotton mills and the Darlington Mfg. Co., is also the president of the new mill. Mr. John T. Abney, formerly of Columbus, Ga., but for some time supt. of the Laurens cotton mill, will superintend both factories. He will be assisted at the new mill by Mr. John H. Turner, who has been the carder at the Laurens mill ever since it started. Both gentlemen are capable and experienced mill men with long and successful careers to their credit in the business. The Laurens cotton mills, whose stock commands the highest price of any mill in the State since the destruction of the Pacolet, hasn't lost a day all summer, every loom and spindle running to its full capacity. An artesian well is being driven at a point about half way between the mill and the mill 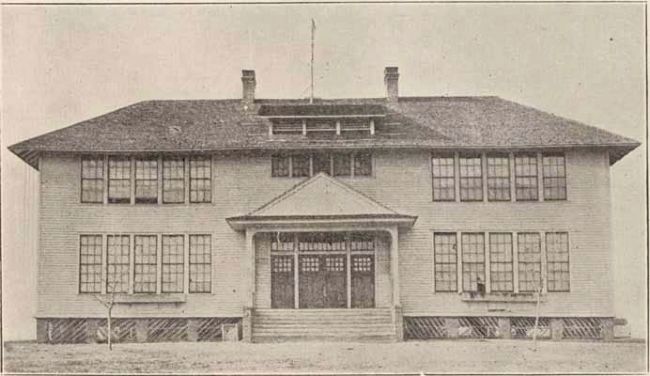 Photographed By University of North Carolina at Chapel Hill
5. Watts Mill Village School
offices and store. A system of water works will be put in the mill, the offices and cottages just as at the Watts mills, the water to be supplied from the new well. Lumber is being laid down for the handsome and commodious schoolhouse which the management proposes to build, equip and maintain for the benefit of the mill operatives. — Spartanburg Herald. (Source: Fibre & Fabric: A Record of American Textile Industries in the Cotton and Woolen Trade, Volume 38 (1903), pg 75.)
— Submitted October 16, 2009, by Brian Scott of Anderson, South Carolina.
2. Watts Mills Laurens, S.C.
Watts Mills at Laurens, South Carolina, established long ago a high reputation for fancy shirtings, satins and silk striped voiles, poplins and dimity checks. The company has built up a strong organization of expert weavers, training them from the best native labor of upper South Carolina. These native South Carolinians have acquired the skill of the French weavers of New Bedford. The work in Watts Mills is varied, intricate and interesting for everybody who has a liking for textile art and a desire to become skilled in the production of beautiful fabrics.

Watts Mills have 984 looms and 43,200 spindles. It is a big modern plant, as can be seen in the picture on this page, and it has been further improved recently with a new opening room and a new humidifier system. The mill was repainted last year inside. Supt. E.G. Jessee has been in charge for many years and keeps the plant in first class condition. His department heads are C.R. Roberts in carding, Floyd Tidwell in spinning, E.A. Franks in weaving, J.C. Clark in cloth room, R.H. Donaldson in patterns and supplies, F.K. Taylor in the power house.

The Watts Mill village is a suburb of Laurens, and Laurens is the prosperous county-seat of one of the upper South Carolina counties. The employees thus have country life and city life and they have in their own village many modern advantages including electrically lighted homes. The company is regrading the streets and laying new sidewalks. A landscape architect is completing plans for the parking of the mill village.

The workers have a twenty-one piece band, a savings bank, and a splendid graded school, and a number of community societies that help to make life pleasant.