The Home of James Fenimore Cooper 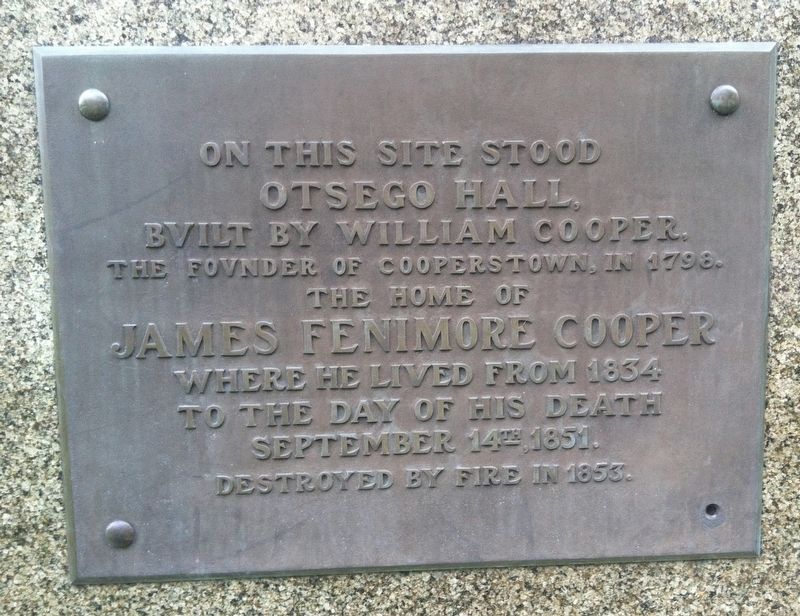 By Howard C. Ohlhous, October 21, 2016
1. Otsego Hall Marker
Inscription.
Otsego Hall. The Home of James Fenimore Cooper.
On This Site Stood Otsego Hall, Bvilt By William Cooper, The Fovnder Of Cooperstown, in 1798. The Home Of James Fenimore Cooper Where He Lived From 1834 To The Day Of His Death September 14th, 1851. Destroyed by Fire in 1853. . . This historical marker was erected in 1940. It is in Cooperstown in Otsego County New York

On This Site Stood
Otsego Hall,
Bvilt By William Cooper,
The Fovnder Of Cooperstown, in 1798.
The Home Of
James Fenimore Cooper
Where He Lived From 1834
To The Day Of His Death
September 14th, 1851.
Destroyed by Fire in 1853.

Topics. This historical marker is listed in these topic lists: Arts, Letters, Music • Settlements & Settlers. A significant historical date for this entry is September 14, 1851. 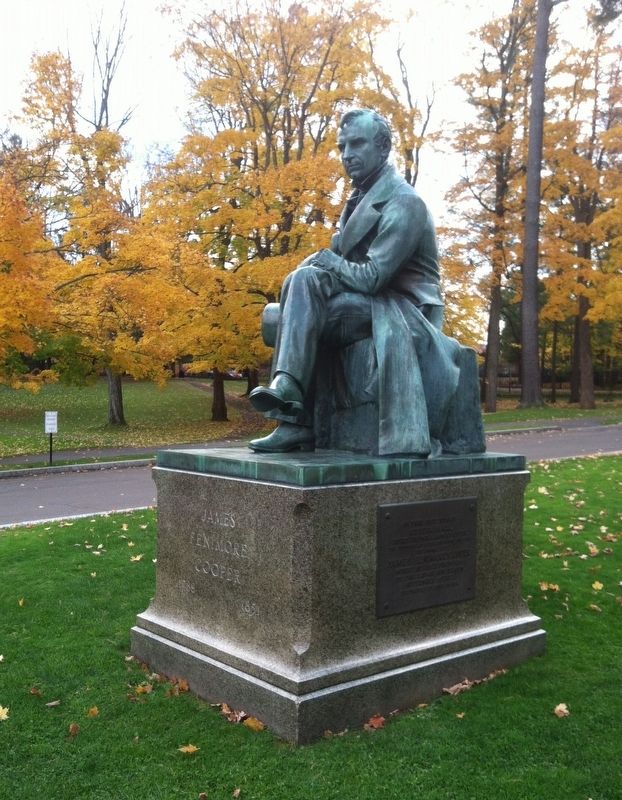 By Howard C. Ohlhous, October 21, 2016
2. Otsego Hall Marker
The marker is mounted to the base of the statue.

Click or scan to see
this page online
700 feet away); Tunnicliff Inn (about 700 feet away); Doubleday Field (approx. 0.2 miles away). Touch for a list and map of all markers in Cooperstown.

Regarding Otsego Hall. Located in the village of Cooperstown between present-day Main and Church Streets, Otsego Hall was built by William Cooper in 1799 and was the largest house west of Albany for many years. After the death of William Cooper and his widow, the mansion was vacant for many years. In June 1834, James Fenimore Cooper resolved to reopen the house after an absence of nearly sixteen years. The building had been long closed and falling into decay. He had it remodeled in a castellated Gothic style. The ceiling on the first floor was raised from ten feet to thirteen feet. Also Gothic windows and battlements were installed. In this, Cooper was assisted by his friend, Samuel F. B. Morse, a painter and inventor, who designed two towers for the front and east sides of the structure. At first, Cooper spent his winters in New York City and summered in Cooperstown, but eventually he made Otsego Hall his permanent residence. Cooper died in 1851, and after the family sold it, the mansion burned down in 1853, and the surrounding property was sold by the heirs. His 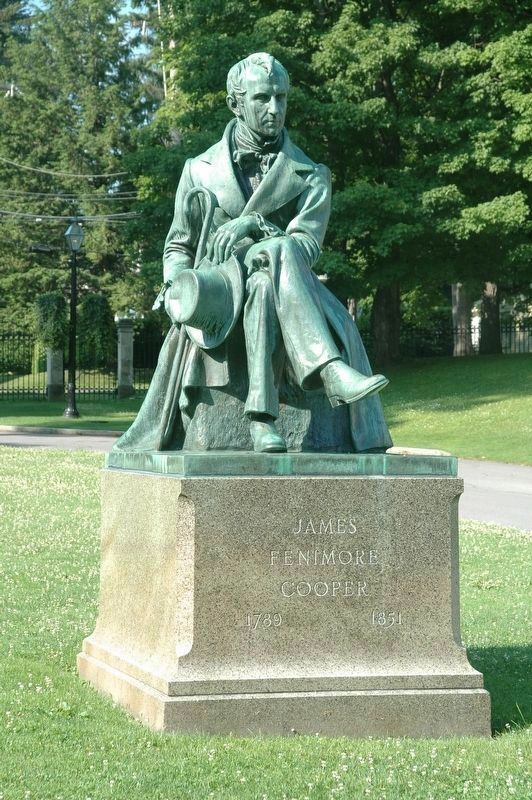 1789     1851
daughter, Susan Fenimore Cooper, built a house in Cooperstown, made mainly of bricks and material salvaged from the ruins of Otsego Hall. The lot remained vacant until 1897, when it was dedicated as a public park called the Cooper Grounds by Mrs. Alfred Corning Clark. 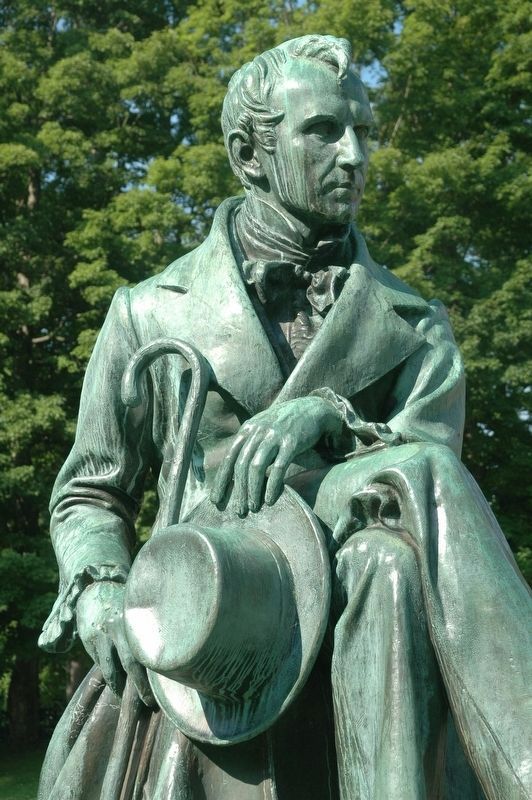 By Howard C. Ohlhous, July 5, 2018
4. James Fenimore Cooper Statue - Detail
A portrait of novelist James Fenimore Cooper (1789-1851) sitting on a block with his legs crossed, right over left leg. In his right hand he holds a cane. His left arm is draped over his right knee and in his left hand he holds a wide-brimmed hat. He wears a long overcoat, a shirt with ruffled cuffs, and a bow tie. The sculpture rests on a rectangular base of polished stone, with a plaque mounted on the west side, which faces the Baseball Hall of Fame. The sculpture was made by Victor Salvatore (1885-1965) who was a sculptor, painter, and teacher who lived in New York City and in Springfield Center, a village north of Cooperstown on Otsego Lake. Salvatore also made the statue of the Sandlot Kid, located next to Key Bank on Main Street in Cooperstown. 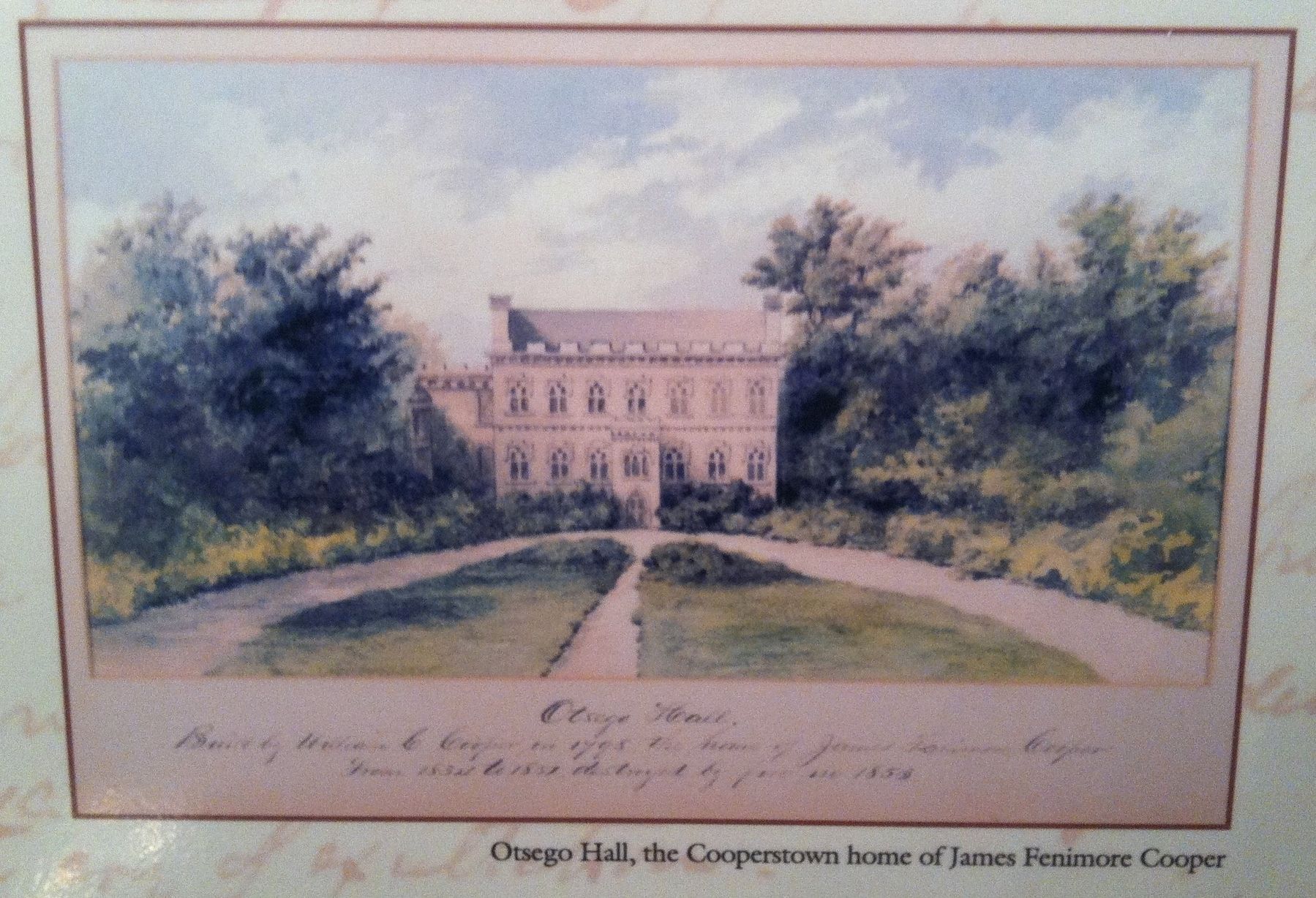 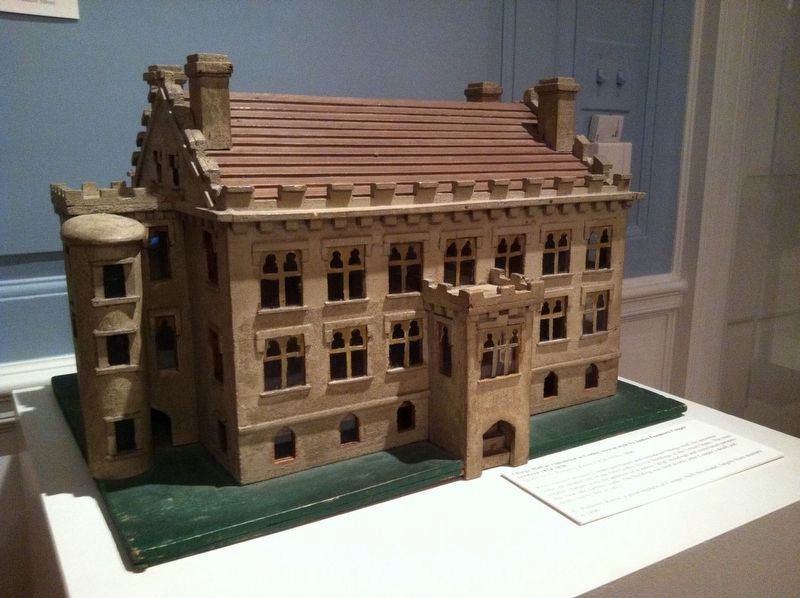