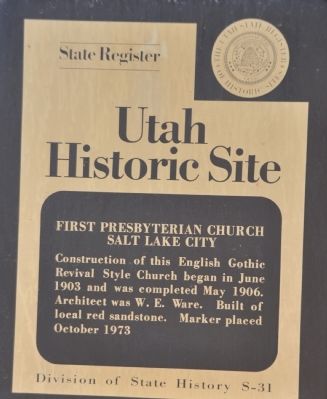 Construction of this English Gothic Revival Style Church began in June 1903 and was completed May 1906. Architect was W. E. Ware. Built of local red sandstone.

Topics and series. This historical marker is listed in this topic list: Churches & Religion. In addition, it is included in the American Presbyterian and Reformed Historic Sites series list.

Location. 40° 46.175′ N, 111° 52.812′ W. Marker is in Salt Lake City, Utah, in Salt Lake County. Marker is at the intersection of South Temple Street (State Highway 186) and C Street, on the right when traveling west on South Temple Street. The marker is located facing east on the left pillar of the central section of the main entry. Touch for map. Marker is at or near this postal address: 12 C Street, Salt Lake City UT 84103, United States of America. Touch for directions.

Other nearby markers. At least 8 other markers are within walking distance of this marker. Cathedral of the Madeleine (about 400 feet away, measured in a direct line); Twentieth Ward School (approx. 0.2 miles away); St. Mark's Episcopal Cathedral 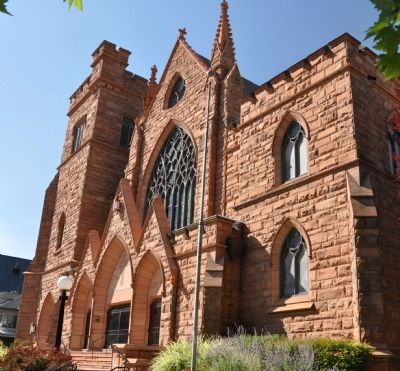 Regarding First Presbyterian Church Salt Lake City. The First Presbyterian Church Salt Lake City was listed as a contributing building as part of the South Temple Historic District in the National Register of Historic Places in 1980. The church is also one of 445 American Presbyterian and Reformed Historical Sites registered between 1973 and 2003 by the Presbyterian Historical Society (PHS), headquartered in Philadelphia. Approved sites received a metal plaque featuring John Calvin’s seal and the site’s registry number (PHS marker location unknown). 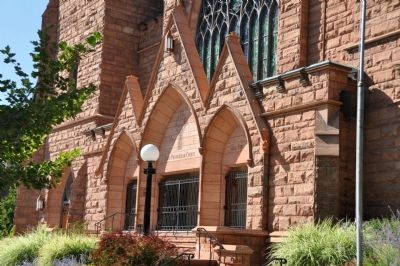 By Bryan R. Bauer, August 31, 2010
3. Main Church Entrance
building was the first home of Westminster College, and was occupied for thirty years before the congregation moved to its present facility. Walter E. Ware designed the Gothic Revival structure, inspired by the cathedral church of Carlisle, England, with its low square tower. The exterior was built of indigenous red sandstone with hard stone trim. First occupied in 1905, the most recent renovations occurred in 2003. It was listed on the National Register of Historic Places in 1980. 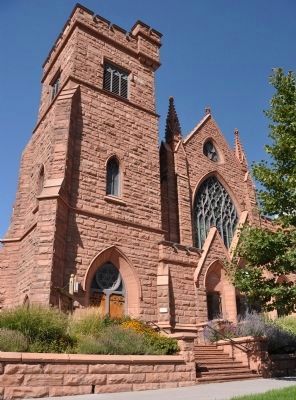 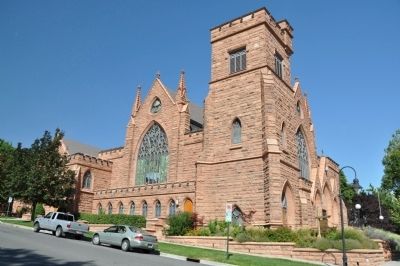 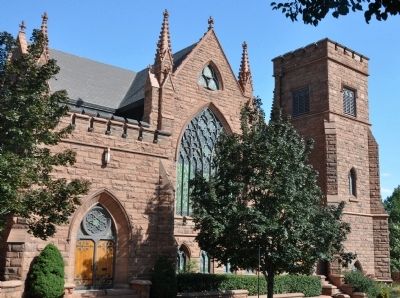 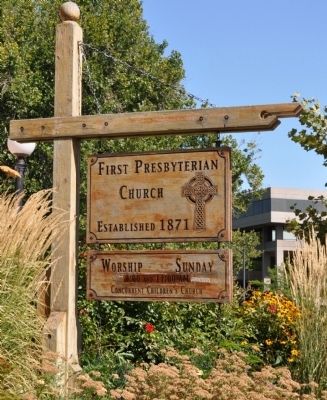