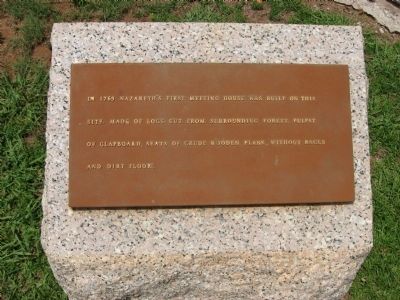 In 1765 Narareth’s first meeting house was built on this site. Made of logs cut from surrounding forest, pulpit of clapboard, seats of crude wooden plank, without backs and dirt floor. (Marker Number 136.)

Topics and series. This historical marker is listed in this topic list: Churches & Religion. In addition, it is included in the American Presbyterian and Reformed Historic Sites series list. A significant historical year for this entry is 1765.

Other nearby markers. At least 8 other markers are within 5 miles of this marker, measured as the crow flies. Nazareth Frame House (about 300 feet away, measured in a direct line); Nazareth Church (approx. 0.3 miles away); First Erosion Control Work in the Southeast (approx. 2½ miles away); Camp Wadsworth (approx. 2.6 miles away); John B. White Sr., Blvd. (approx. 3.1 miles away); 15th N.Y. Infantry / Harlem Hell Fighters 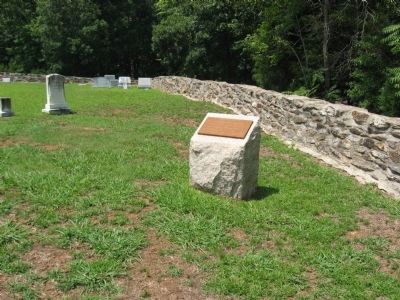 More about this marker. The marker has a modest stone base with a plaque attached.

Regarding Nazareth Church Stone Marker. This is a remarkable location. Numerous plaques of war heros spanning Americas history from the Revolutionary War to the present.

Nazareth cemetery is one of the oldest in the upstate of South Carolina dating back to the Revolutionary War. People travel from all over the United States to visit their forefathers. A small gate at the back of the cemetery will lead you past two memorials at the edge of a tree line. You can then hike a trail to the “Meeting House Springs” where the first church was erected. Along the trial you will encounter several outlying graves that are clearly marked.

The following text is taken from the Presbyterian 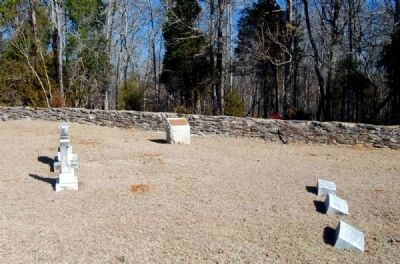 Established in 1772 near the first permanent settlement in Spartanburg County, the Nazareth congregation first worshiped in a log meeting house erected the same year. The church served as the site of the first great revival in the area in 1802. The present church structure, constructed of homemade bricks in 1832, is the oldest public building in the county. The congregation added educational facilities in 1957. Adjoining the church is a cemetery that is one of the oldest in upper South Carolina.

2. An Act to Incorporate the Nazareth Presbyterian Church of Spartanburg County. Act approved March 9, 1872 for a period of 25 years. (Submitted on February 14, 2011, by Brian Scott of Anderson, South Carolina.)

Additional commentary.
1. Nazareth Church
Nazareth Church is situated in the district of Spartanburg, on the waters of Tyger river, towards its source. Its first formation proceeded from a few families, eight 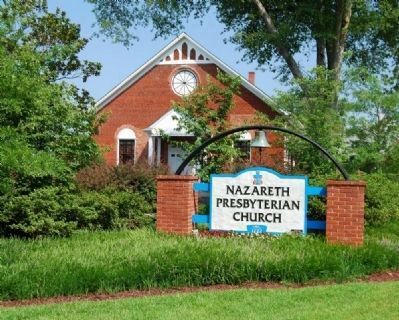 Photographed By Brian Scott
4. Nazareth Presbyterian Church and Sign
or ten in number, who obtained supplies in 1766, and were soon afterwards organized into a society.—(MS. Hist. of Second Presbytery of South Carolina.) The Rev. Robert H. Reid dates the first settlements on Tyger river about the year 1761. They certainly existed before the year 1765, for in that year the road that passes by the church between the North and Middle rivers was opened. The first settlers were Scotch-Irish from Pennsylvania. When they left the north of Ireland and came into Pennsylvania we have at present no means of ascertaining. Some of the families were in Pennsylvania as early as 1732, for in that year Captain Barry was born in that State. The names of the first settlers were Barry, Moore, Anderson, Collins, Thompson, Vernon, Pearson, Jamison, Dodd, Ray, Penrey, McMahon, and Nichol. About the year 1767 or 1768 their numbers were increased by a colony which came directly from the north of Ireland. They were each entitled to one hundred acres of land by a grant from his majesty George II., and the old titles bear date in 176S. The families of Caldwell, Coan, Snoddy, Pedan, Alexander, Gaston, Morton, and perhaps some others, came at that time. These first settlers on Tyger river, like all of the same descent, were full of reverence for God's word and for the institutions of religion; and no sooner had they established their homes in the forest of the New World 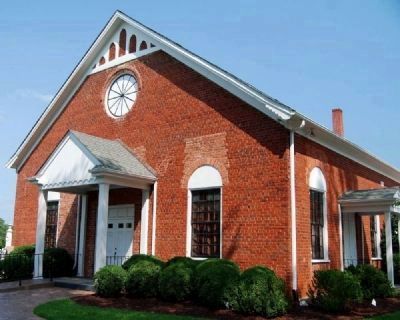 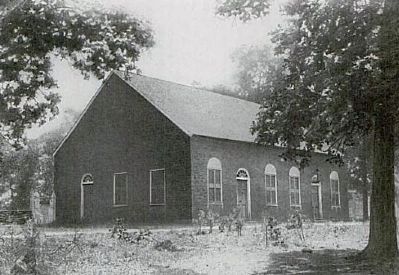 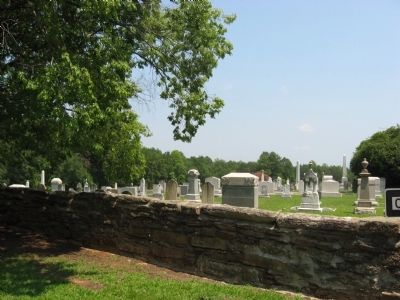