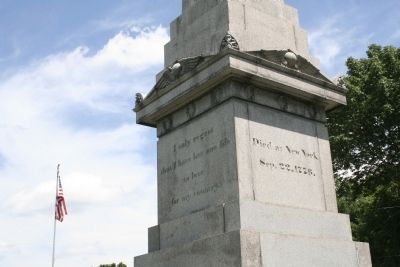 Erected 1846 by the State of Connecticut and the Hale Monument Association.

Topics. This historical marker and monument is listed in this topic list: War, US Revolutionary. A significant historical month for this entry is June 1775.

Location. 41° 46.069′ N, 72° 18.388′ W. Marker is in Coventry, Connecticut, in Tolland County. Marker is at the intersection of Lake Street and Monument Hill Road, on the left when traveling north on Lake Street. At the Nathan Hale Cemetery. Touch for map. Marker is at or near this postal address: 120 Lake St, Coventry CT 06238, United States of America. Touch for directions. 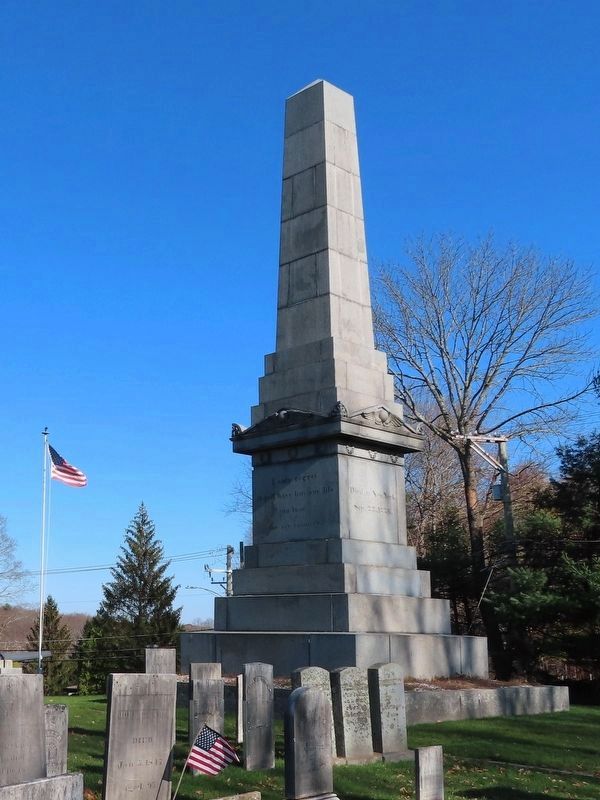 More about this monument. An 45-foot obelisk consisting of a base, die and shaft constructed of Quincy, Massachusetts granite. Each face of the monument is embellished with a row of three wreaths under a low gabled pediment. The tympanum bears a feroher (an Egyptian symbolic decoration in the form of a disc with a pair of long, horizontal wings). The base of the monument rises in four tiered stages. Riser steps lead up to the monument.

This early commemorative memorial honors Nathan Hale (1755-1776), a Revolutionary War hero and Coventry native. The memorial was designed by Connecticut architect Henry Austin and erected by Solomon Willard, owner of the granite quarries at Quincy, Massachusetts. The monument was controversial when first erected, as monuments were seen by some as decadent and anti-republican or as symbols of European aristocracy or of religion. The Hale Monument Association, formed in November 1837, was unsuccessful in seeking US Congressional funds. In May 1846, the State of Connecticut provided $1,000 and in May 1847, $250.00 more for the monument. Total cost of the monument (including transportation charges) came to $3,733.93. Private subscriptions, fairs, tea-parties and the "exhibition of a Drama illustrating the fate of Capt. Hale," made up the difference from state funding.

In 1893, as cited in the Special Acts and Resolutions Passed by the General Assembly of the State of Connecticut at the January session, an act was approved on April 19, 1893 which directed the Commission on the Nathan Hale monument to repair and restore the monument and approved an appropriation of $2,500 to pay for the work. W. N. Flynt Granite Co., of Monson, Massachusetts, put in a new base foundation and constructed the surrounding granite walls, curbing and steps leading up to the monument. Thereafter, care for the monument fell to the Connecticut State Comptroller until 1923, when it was transferred to the State Park & Forest Commission (by Chapter 159 of Public Acts Passed by the General Assembly of the State of Connecticut in the year 1923). The monument is now administered by the Connecticut Department of Environmental Protection. 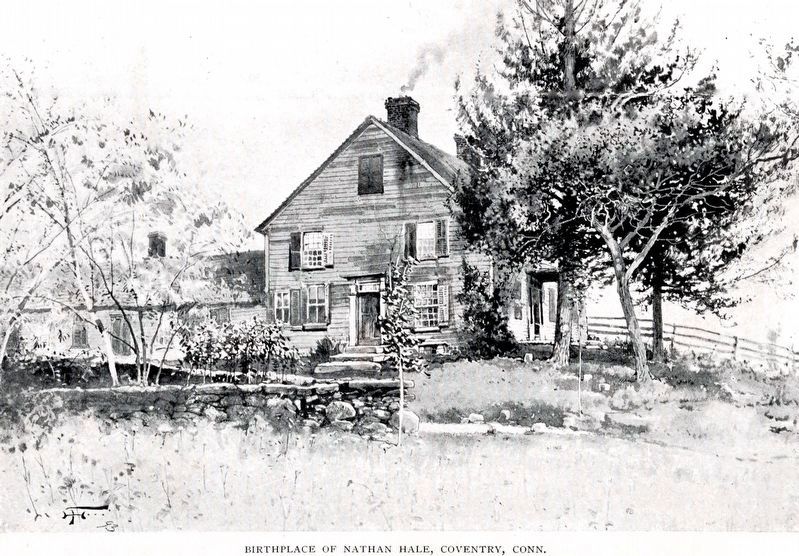 Internet Archive
3. Birthplace of Nathan Hale, Coventry Connecticut
from The Young Hero by Mary S. Northrup in Revolutionary Stories Retold from St. Nicholas, 1905.
Credits. This page was last revised on November 10, 2019. It was originally submitted on October 7, 2008. This page has been viewed 2,868 times since then and 61 times this year. Photos:   1. submitted on October 7, 2008, by Tim Loew of Worcester, Massachusetts.   2. submitted on November 10, 2019, by Michael Herrick of Southbury, Connecticut.   3. submitted on February 22, 2019, by Allen C. Browne of Silver Spring, Maryland. • Kevin W. was the editor who published this page.
Share this page.