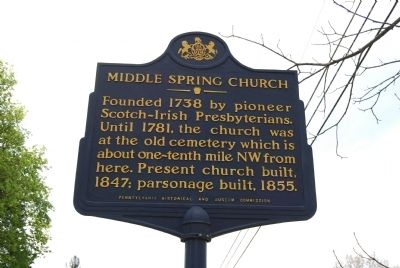 Photographed By Mike Wintermantel, April 30, 2015
1. Middle Spring Church Marker
Inscription.
Middle Spring Church. . Founded 1738 by pioneer Scotch-Irish Presbyterians. Until 1781, the church was at the old cemetery which is about one-tenth mile NW from here. Present church built, 1847; parsonage built, 1855. . This historical marker was erected in 1950 by Pennsylvania Historical and Museum Commission. It is in Southampton Township in Cumberland County Pennsylvania

Founded 1738 by pioneer Scotch-Irish Presbyterians. Until 1781, the church was at the old cemetery which is about one-tenth mile NW from here. Present church built, 1847; parsonage built, 1855.

Topics and series. This historical marker is listed in this topic list: Churches & Religion. In addition, it is included in the American Presbyterian and Reformed Historic Sites, and the Pennsylvania Historical and Museum Commission series lists. A significant historical year for this entry is 1738.

Location. 40° 4.901′ N, 77° 32.477′ W. Marker is in Southampton Township, Pennsylvania, in Cumberland County. Marker is on Middle Spring Road, 0.2 miles north of Walleye Drive, on the right when traveling south. Touch for map. Marker is at or near this postal address: 135 Middle Spring Rd, Shippensburg PA 17257, United States of America. Touch for directions.

Other nearby markers. At least 8 other markers are within 3 miles of this marker, measured as the crow flies. Our Fallen Patriots (within shouting distance of this marker); Middle Spring Presbyterian Church Commemorative Marker (about 500 feet away, measured in a direct line); Lt. James F. Bearer, USMC Memorial Trees 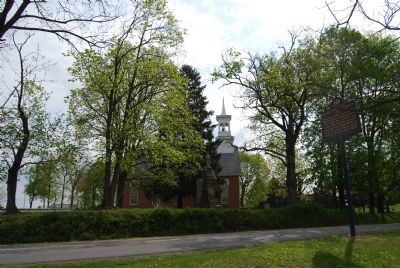 As early as 1736, preaching services were held on the banks of Middle Spring Creek. Scotch-Irish settlers constructed the first meeting house in 1738. The present red brick building, erected in 1847, is the fourth used by the congregation on this site. Thomas Craighead, the first pastor, was succeeded by John Blair and then Thomas Cooper, who served as a chaplain in the Revolutionary War. Three cemeteries surround the church, the oldest dating to the 1730s.