A father and son who worked in this building greatly shaped our nation’s economy.

His son, William McChesney Martin, Jr., worked here as a bank examiner in 1928. He moved to New York and, at 31, became the first paid president of the New York Stock Exchange.

Martin, Jr. also chaired the Federal Reserve Board through five administrations, from Harry S. Truman to Richard M. Nixon. On controlling inflation, he said that the Federal Reserve’s role was “to take away the punch bowl when the party gets going.”
Discover Saint Louis 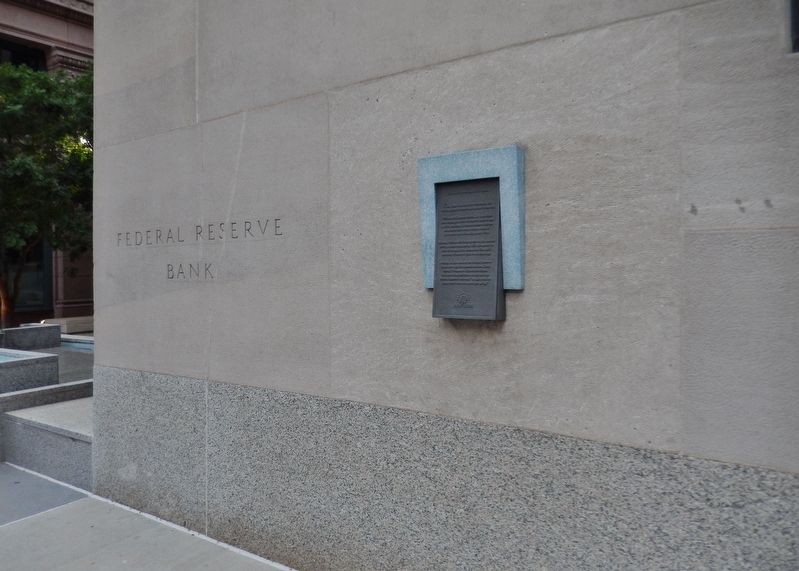 Click or scan to see
this page online
90° 11.265′ W. Marker is in St. Louis, Missouri. Marker is at the intersection of North 4th Street and Locust Street (Federal Reserve Bank Plaza), on the left when traveling north on North 4th Street. Marker is mounted at eye-level, directly on the subject building, near the southeast corner of the building, facing east toward 4th Street. Touch for map. Marker is at or near this postal address: 1 Federal Reserve Bank Plaza, Saint Louis MO 63102, United States of America. Touch for directions.

More about this marker. Marker is a large metal plaque, mounted within a decorative polished granite frame.

Also see . . .
1. Federal Reserve Act (1913). The bill called for a system of eight to twelve mostly autonomous regional Reserve Banks that would be owned by commerical banks and whose actions would be coordinated by a committee appointed by the President. The Federal Reserve System would then become a privately owned 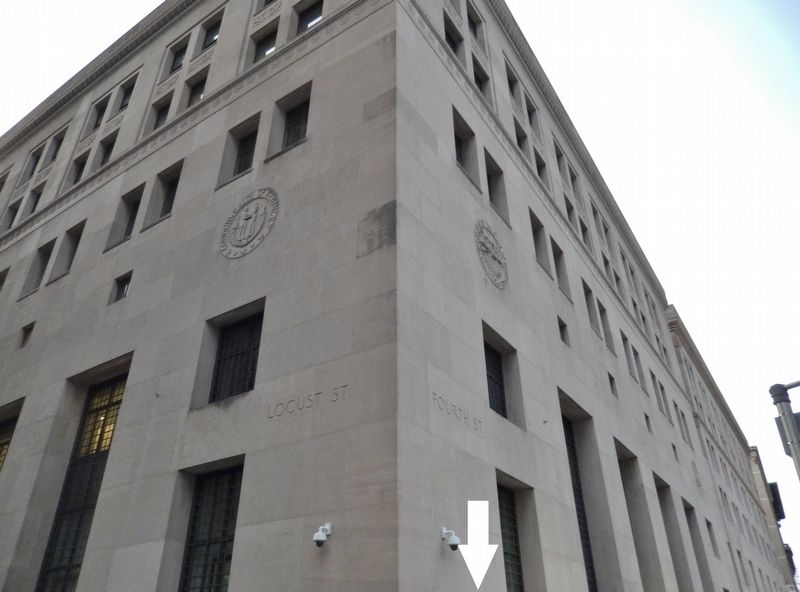 Photographed By Cosmos Mariner, September 11, 2017
3. Federal Reserve Bank of St. Louis (southeast corner view; marker is just below image frame)
banking system that was operated in the public interest. Bankers would run the twelve Banks, but those Banks would be supervised and by the Federal Reserve Board whose members included the Secretary of the Treasury, the Comptroller of the Currency, and other officials appointed by the President to represent public interests. (Submitted on August 27, 2018, by Cosmos Mariner of Cape Canaveral, Florida.)

2. William McChesney Martin Sr. Martin helped draft the Federal Reserve Act, then became the first chairman of the board of directors and Federal Reserve agent of the St. Louis Fed on September 1, 1914. During World War I, Martin also served as chairman of the St. Louis Fed committee on capital issues. He eventually assumed the role of governor of the Bank in 1929. The title of governor was changed to president, and Martin remained president until 1941. (Submitted on August 27, 2018, by Cosmos Mariner of Cape Canaveral, Florida.)