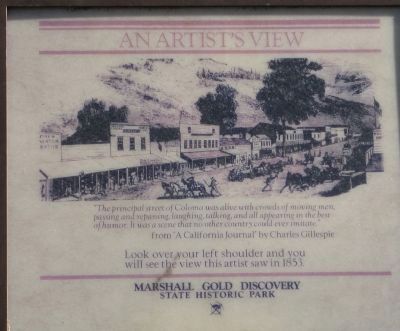 By Syd Whittle, October 7, 2008
1. Coloma Marker
Inscription.
Coloma. An Artists View. ”The principle street of Coloma was alive with crowds of moving men, passing and repassing, laughing, talking, and all appearing in the best of humor. It was a scene that no other country could ever imitate.”, from “A California Journal” by Charles Gillespie, Look over your left shoulder and you will see the view this artist saw in 1853 . This historical marker was erected by Marshall Gold Discovery State Historic Park. It is in Coloma in El Dorado County California

”The principle street of Coloma was alive with crowds of moving men, passing and repassing, laughing, talking, and all appearing in the best of humor. It was a scene that no other country could ever imitate.”

from “A California Journal” by Charles Gillespie

Topics and series. This historical marker is listed in these topic lists: Industry & Commerce • Settlements & Settlers. In addition, it is included in the National Historic Landmarks series list. A significant historical year for this entry is 1853.

Location. 38° 47.978′ N, 120° 53.376′ W. Marker is in Coloma, California, in El Dorado County. Marker is on State Highway 49, on the left when traveling south. Marker is located within the boundaries of the Marshall Gold Discovery State Historic Park. Touch for map. Marker is in this post office area: Coloma CA 95613, United States of America. Touch for directions.

Other nearby markers. At least 8 other markers are within walking distance of this marker. Robert Bell's Store (here, next to this marker); Odd Fellows Hall 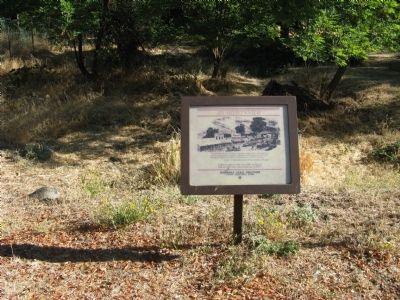 Additional commentary.
1. Coloma has been designated as a National Historic Landmark
Statement of Significance (as of designation - July 4, 1961):
The discovery of placer gold at Coloma on January 24, 1848, resulted in the greatest series of gold strikes on the North American continent. The initial strike occurred at a sawmill constructed by land baron John A. Sutter on the South Fork of the American River. Coloma grew up around Sutter's Mill, and became

By Syd Whittle, October 7, 2008
3. Close Up of Artwork on Marker
the distributing center from which other mining camps were founded to the north, east, and south. The town died as the deposits were exhausted in the late 1850's.

2004, a Save America's Treasures matching grant in the amount of $200,000 was made to Coloma to stabilize the severely deteriorated Thomas Hansford Williams House, a contributing element in the historic district, in order to prepare for its restoration and opening to the public.
— Submitted October 9, 2008, by Syd Whittle of Mesa, Arizona.
2. National Register of Historic Places
Coloma was placed on the National Register of Historic Places on October 15, 1966.
— Submitted November 3, 2008, by Syd Whittle of Mesa, Arizona. 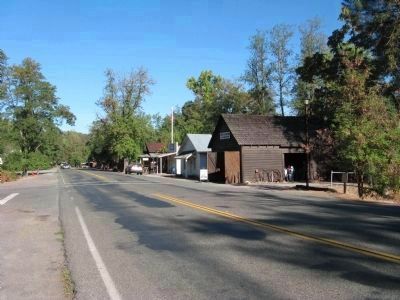