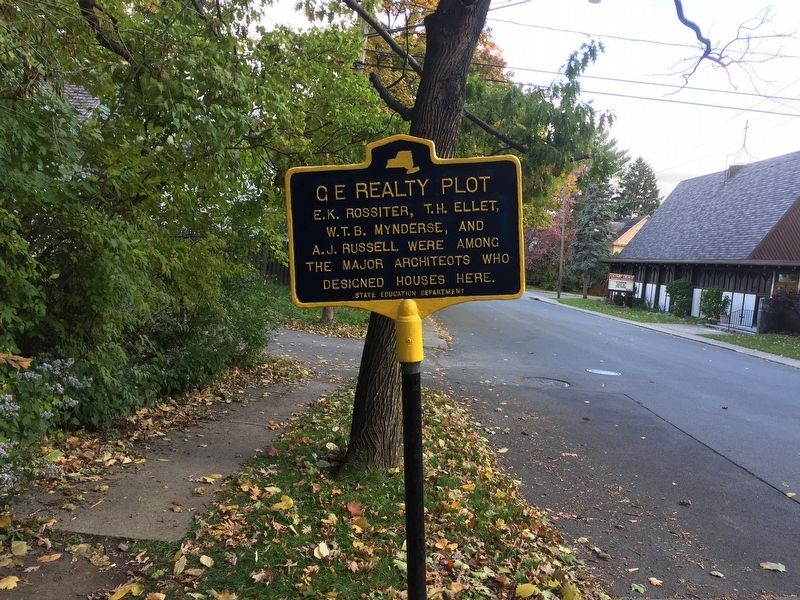 Topics. This historical marker is listed in this topic list: Architecture. A significant historical year for this entry is 1899. 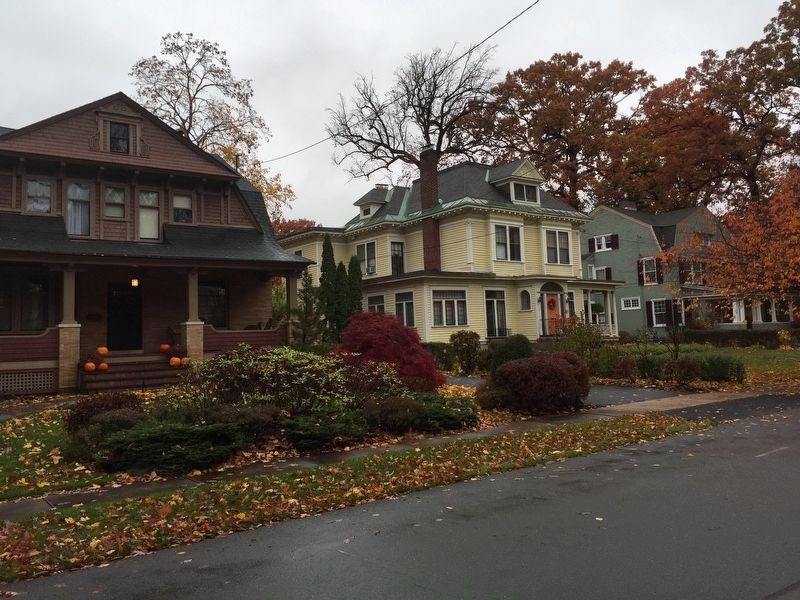 Click or scan to see
this page online
neighborhood in Schenectady. It is an area of approximately 90 acres just east of Union College.

In 1899 Union College announced that, in order to pay off a $30,000 debt, it would sell two adjacent, undeveloped tracts of land. The board of General Electric Company announced that the company would buy the land from the college for $57,000.

The company's executives subdivided it, laid out streets according to a plan inspired by New York's Central Park and built houses on the land, with covenants requiring a minimum lot size and house value. Two of them were among the first fully electric houses in the U.S., used as models by GE. The homes were naturally populated with GE executives. Also settling in the neighborhood were some local businessmen and politicians, and research scientists who worked at the company's research lab in Building 37, a short walk down Erie Blvd. (Building 37 has the giant GE Monogram on it.)

By 1927 approximately a hundred houses had been built, including one later owned by chemist Irving Langmuir, a GE researcher and Nobel Laureate in Chemistry. It has subsequently been designated a National Historic Landmark. In 1980 the entire neighborhood was recognized as a historic district and listed on the national Register of Historic Places.

The district is mostly bounded by streets, making it roughly quadrilateral in shape.

At the west, Lenox Road divides it from the college campus. Nott Street forms the northern boundary, separating the Realty Plot from Ellis Hospital until the rear property lines between houses on Lowell Road and Glenwood Boulevard mark the eastern boundary. After crossing Rugby Road, the line turns west to take in the houses on the south side of that street, including some on Oxford Place just east of its intersection with Wendell Avenue, then following Oxford back to Lenox.

The houses within are on lots with a minimum size of 70 by 140 feet, with set-backs of 35–45 feet from the streets they front on. They are predominantly in the Colonial Revival or Georgian Revival architectural styles with some in Mission Revival, Queen Anne, or Shingle modes.

A walking tour is held annually every May. A self-guided tour brochure is also available online. https://www.slideshare.net/guestab48e4c7/ge-realty-plot-walking-tour-brochure

Also see “The Hidden History of the GE Realty Plot” from the Daily Gazette: https://dailygazette.com/article/2017/06/25/the-hidden-history-of-the-ge-realty-plot

Homes of additional significance in the plot include:
1. 67 Union Avenue. In 1900, the first home built for Edwin W. Rice, a GE executive, one of the three fathers of General Electric.
2. 1155 Avon Road. One of the first all-electric houses in the country when built in 1905.
3. 6 Douglas Road. The first all-electric "Gold Medallion" house in the nation in 1901.
4. Ernst Alexanderson House, 1132 Adams Road. Alexanderson, a pioneer in radio and television development, held 322 patents. The first television broadcast was received here in 1927. GE used it as a model for such houses
5. Ernst Berg House, 1336 Lowell Road. Home of the producer of the first 2-way radio program in the U.S.
6. William D. Coolridge House, 1480 Lenox Road. Home of the inventor of the modern X-ray tube. He served in his later years as GE's director of research
7. Caryl Parker Haskins House, 1166 Avon Road. Home of the entomologist when he taught at Union College.
8. Albert Hull House, 1435 Lowell Road. Home of the inventor of the magnetron, the later foundation for the development of radar and microwave ovens. He held 94 patents.
9. Irving Langmuir House, 1176 Stratford Road. From 1919 until his death in 1957, this was the home of Irving Langmuir, winner of the 1932 Nobel Prize in Chemistry and the first industrial chemist so honored.
10. George R. Lunn House, 1299 Stratford Road. Lunn was the first Socialist elected mayor of a city in New York. He later served as lieutenant governor for a term under Alfred E. Smith.
11. Chester Rice House, 1161 Lowell Road. One night in the 1930s, Rice, a GE engineer, directed radio beams at nearby vehicles and got them to bounce back, one of the earliest practical demonstrations of radar.
12. Edwin Rice House, 1050 Avon Road. Rice built this house for himself in 1905.
Credits. This page was last revised on November 6, 2018. It was originally submitted on October 25, 2018, by Steve Stoessel of Niskayuna, New York. This page has been viewed 256 times since then and 56 times this year. Photos:   1. submitted on October 26, 2018, by Steve Stoessel of Niskayuna, New York.   2. submitted on November 6, 2018, by Steve Stoessel of Niskayuna, New York. • Andrew Ruppenstein was the editor who published this page.
Share this page.