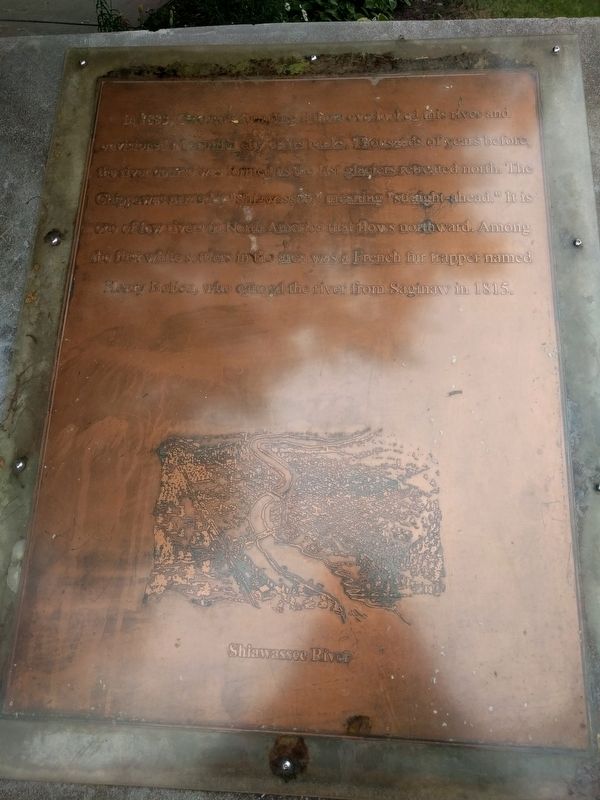 From left to right...

[Panel 1]
In 1833, Owosso's founding fathers overlooked this river and envisioned a beautiful city on its banks. Thousands of years before, the river course was formed as the last glaciers retreaed north. The Chippewas named it "Shiawassee," meaning "straight-ahead." It is one of few rivers in North America that flows northward. Among the first white settlers in the area was a French fur trapper named Henry Bolieu, who canoed the river from Saginaw in 1815.

[Panel 2]
The name, "Owosso" is derived from Chief Wasso a member of the Chippewa tribe who first inhabited this area. According to legend, Chief Wasso's mother, Princess Natomo, saved the life of her husband, Bukadawin, by throwing herself in front of a poison arrow intended for him. Heartbroken by her death, Bukadawin named his baby son Wasso, meaning "one bright spot," as the symbol of the one remaining joy in his life.

[Panel 3]
A. L. and B. O. Williams, brothers who envisioned the settlement that would become Owosso, began purchasing land here in 1833. Carefully selecting the residents of 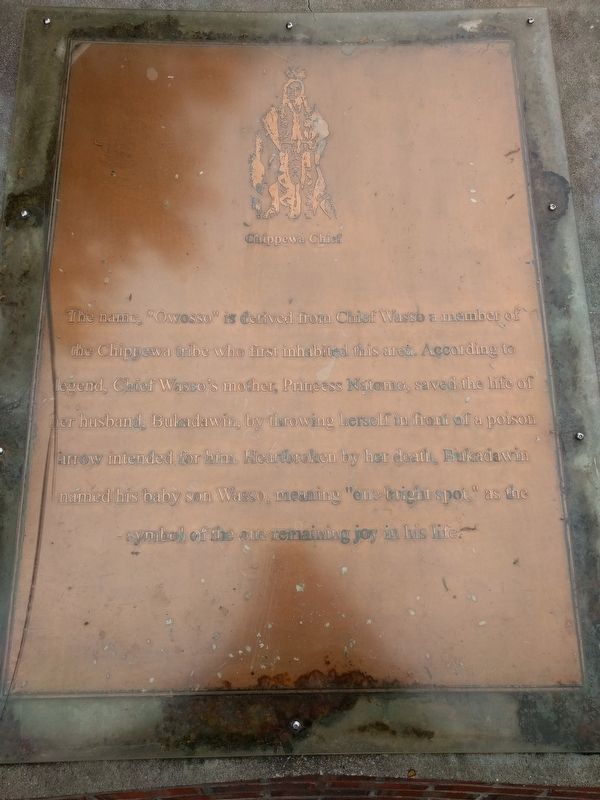 Click or scan to see
this page online
their settlement, they traveled back to New York State, persuading Daniel Ball and others to come to Owosso for the purpose of constructing a millrace. The race diverted the river along the path of present-day Water Street, providing water power for a large grist mill which was located close to the site of the old Armory.

[Panel 4]
Judge Elias Comstock built the first permanent house in Owosso (1836), a log cabin which is preserved in this park. Dr. John Barnes (1842), Owosso's first physician, was a planter of many shade trees and a local "staion master" on the Underground Railroad for runaway slaves. The Gould brothers — Amos (first mayor), Ebenezer, Daniel and David — whose various talents as lawyer, banker, merchant, surveyor, railroad builder and entrepreneur set a high standard for Owosso's future development.

[Panel 5]
The railroad arrived in Owosso in 1856, bringing a surge in population and prosperity, replacing the twice-weekly stagecoach from Pontiac that had delivered mail and passengers. This link to the outside world attracted hundreds of craftsmen, artisans and designers to the settlement previously known as Big Rapids, Wasso, Owasso and finally Owosso. Incorporated in 1859, with 1,000 residents, Owosso has the distinction of never having been a village and no other place in the world shares its name. 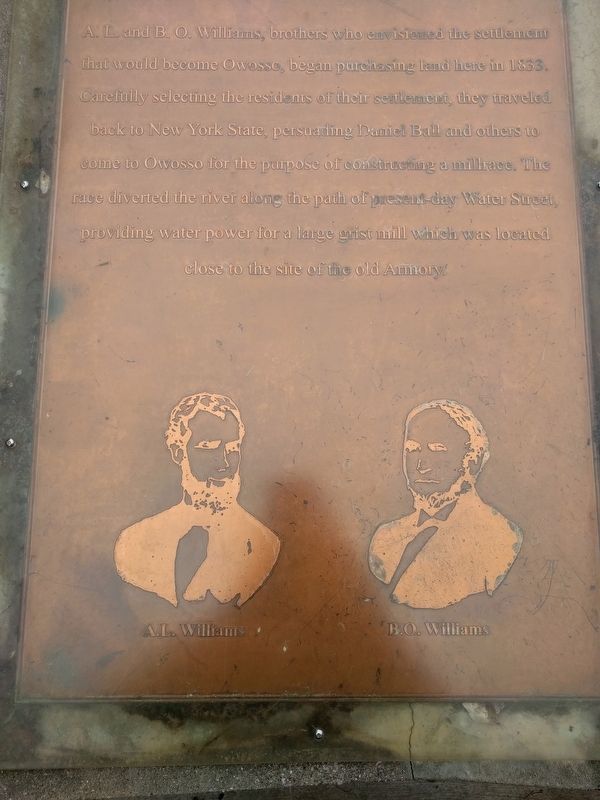 By Joel Seewald, June 23, 2018
3. Walk of History Marker [Panel 3]
6] Owosso Casket Company & Woodard Furniture Company
The railroads transported great quantities of Michigan timber to the city, supplying cornerstone industries such as Woodard's Furniture and Owosso Casket Companies (the latter the largest in the world), Estey's Furniture Factory and Robbins Table Company. By the 1870s, Owosso had become a center for the manufacture of furniture, carriages, merry-go-rounds and other fine wood products. The thriving market for these products made Owosso one of the nation's most prominent and successful manufacturing areas.

[Panel 7]
Growth continued through the late nineteenth century with the expansion of iron and steel industries. In 1885, Alvin Bentley I founded the Owosso Manufacturing Company and later invested heavily in a small company called General Motors, eventually making him the 16th richest man in the country; The $1 million Owosso Sugar Company was built in 1903; The Renown Stove Company relocated to Owosso in 1908, becoming one of the city's largest employers. Prosperity continued until the Great Depression.

[Panel 8]
The quality of life in Owosso was, from the beginning, enhanced by the artist and artisans who were drawn here by the city's flourishing trades and industries, especially in woodworking and furniture-making. These skilled workers left their mark in the inspired 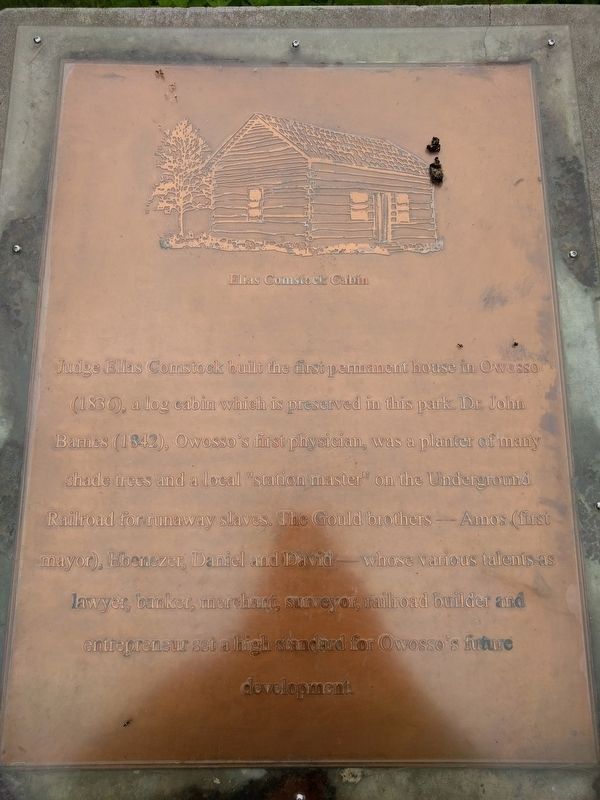 By Joel Seewald, June 23, 2018
4. Walk of History Marker [Panel 4]
designs and workmanship that distinguishes Owosso's many fine homes and commercial buildings. Their legacy is a city that features one of the finest collections of nineteenth century architecture in the Midwest.

[Panel 9] Frederick Carl Frieseke
Frederick Carl Fieseke (1874-1939), internationally renowned impressionist painter, was born and raised in a home on North Water Street. Frieseke lived his adult life in France, for twenty years as a neighbor to Claude Monet in Giverny. His paintings sell for millions of dollars and are displayed in many of the world's great museums. The Shiawassee Arts Center, located in this park, devotes a gallery to his work, including "Lady with the Sunshade" (1910), which he gave to the city in 1926.

[Panel 10] Curwood Castle
Curwood Castle sits near the home of James Oliver Curwood (1878-1927), one of America's foremost authors of adventure novels and early advocate of environmental conservation. Curwood wrote over 30 tales, many adapted as films, making him a millionaire. After his life was spared by a grizzly bear he was hunting, Curwood championed the causes of wildlife preservation. His Castle, fashioned after a French chateau, was his office and writing studio, and is now a museum and setting for special events. 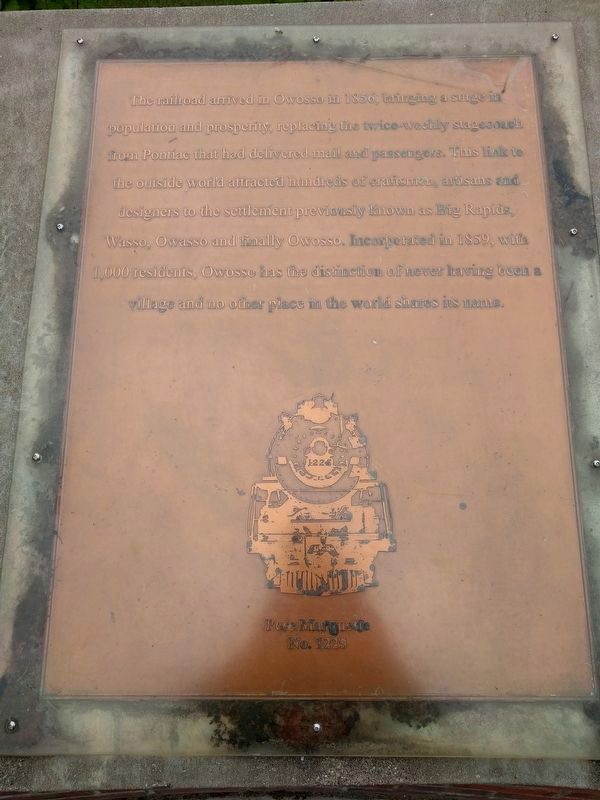 By Joel Seewald, June 23, 2018
5. Walk of History Marker [Panel 5]
Tribune headline "Dewey Defeats Truman", Thomas E. Dewey (1902-1971), was a three-term governor of New York and Republican presidential candidate in 1944 and 1948. He was born nearby and raised on West Oliver Street. In 1935 Dewey was appointed as special prosecutor and two years later elected as district attorney of New York County. He was widely known as the "Rackets Buster" who obtained convictions against 72 of 73 criminal defendants.

[Panel 12] George W. Hoddy
George W. Hoddy turned his patents for lightweight portable motors into Universal Electric, an international industrial powerhouse that galvanized Owosso's economy and employed thousands of workers both locally and abroad. His innovative company played a key role in supplying U.S. military aircraft during WW II and successfully expanded into the domestic market after the war. A visionary leader, helping to bring Baker College to Owosso, he was a philanthropist and exemplary manager of his employees, who affectionately called him "Mr. George."

[Panel 13]
Notable educators include Rev. John Cavanaugh, President of Notre Dame Univeristy (1946-1952) and Dr. John Perkins, President of the University of Delaware in 1947. Alfred Day Hershey, bacteriologist, geneticist and director of the Carnegie Institution, won the Nobel Prize in Medicine in 1969. Geraldine Mahaney, a supervisor 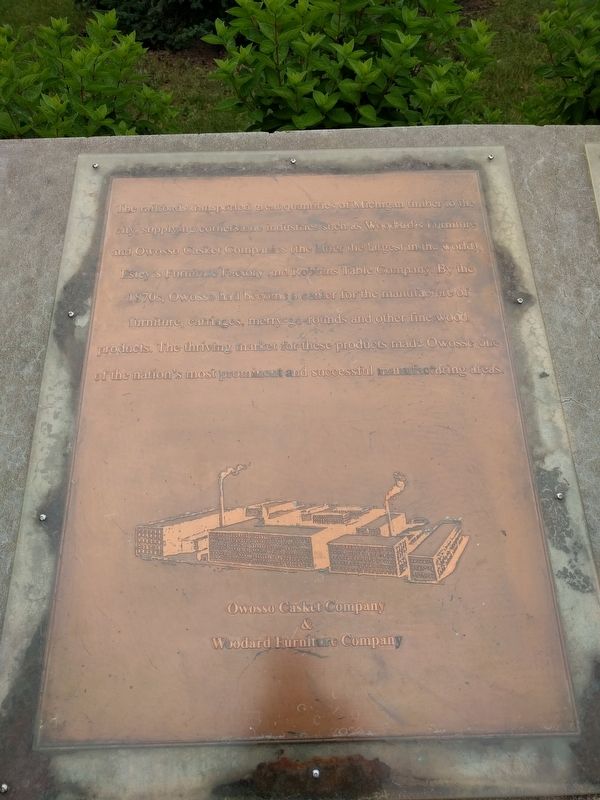 [Panel 14] Jefferson Nickel
Other distinguished citizens include John Bagley, Governor of Michigan (1873-77), who lived here as a teenager. Alvin M. Bentley III, diplomat, philanthropist and U.S. Congressman (1953-1961), who, with his wife, Billie, established the Alvin M. Bentley Foundation; and Felix Schlag, the artist who designed the Jefferson nickel in use from 1938 to 1974. Cora Phillips Taylor, the first woman in the U.S. to receive a commercial chauffer's license (1914), co-founded Indian Trails Motorcoach.

[Panel 15]
Owosso's residential and downtown districts preserve a remarkable number of architecturally significant historical homes, churches and businesses. In 1979, Owosso was the first city to be entered on the National Register of Historic Places in the multiple resource category. The Register lists historic districts encompassing Oliver Street, Mason Street, Michigan Avenue and Westown, and cites twenty-four individual buildings, including the renovated Woodard Furniture Factory. The city's expansive urban layout attests to the ambition and industry of its nineteenth century citizens. 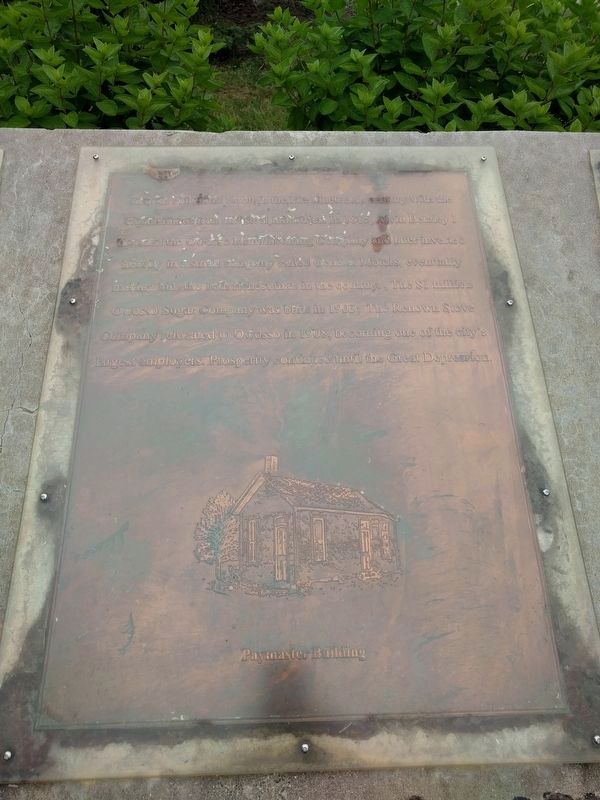 By Joel Seewald, June 23, 2018
7. Walk of History Marker [Panel 7]
16] Heritage Footbridge
This Walk of History is a glimpse into Owosso's past. Visit and experience some of its present day treasures...Curwood Castle, the Arts Center, the Steam Railroading Institute, our architecturally outstanding buildings, and the Shiawassee River...Owosso's reason for being. The Miner walkway and bikepath, across the river, leads to the Voight loop trail and then on to the city of Corunna, three miles upstream. Owosso is a great place to live, work and play...discover its beauty and historic charm.

Topics and series. This historical marker is listed in these topic lists: Arts, Letters, Music • Education • Government & Politics • Industry & Commerce. In addition, it is included in the Former U.S. Presidents: #33 Harry S. Truman series list. A significant historical year for this entry is 1833. 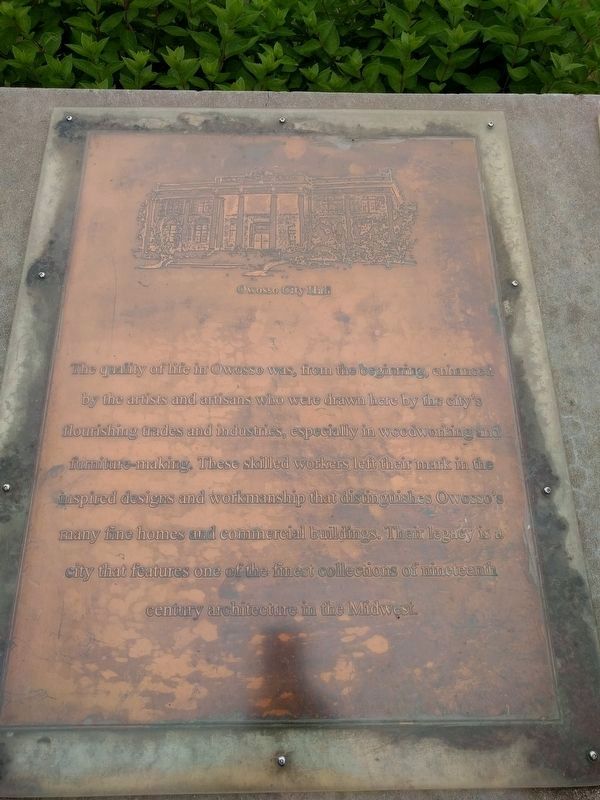 Also see . . .  Owosso's best honored on Walk of History. Article about the unveiling of the Walk of History in Owosso's newspaper, The Argus-Press. (Submitted on October 31, 2018, by Joel Seewald of Madison Heights, Michigan.) 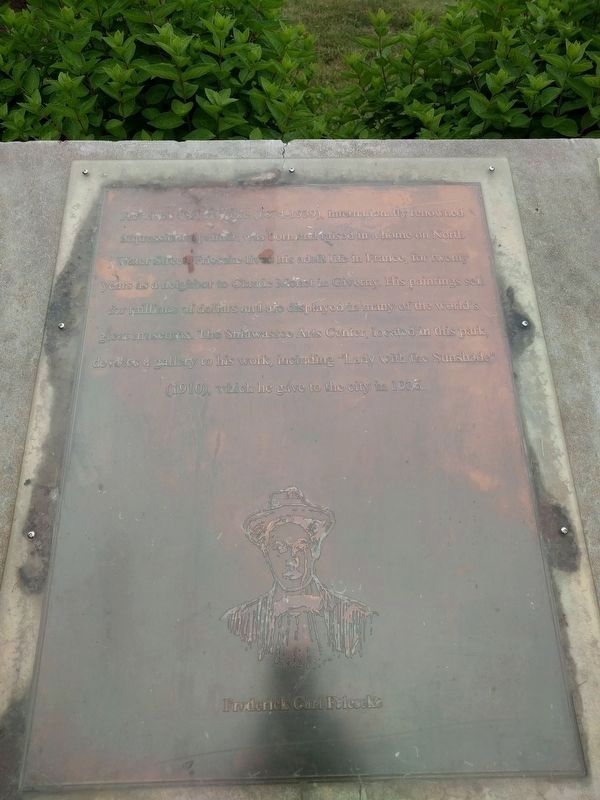 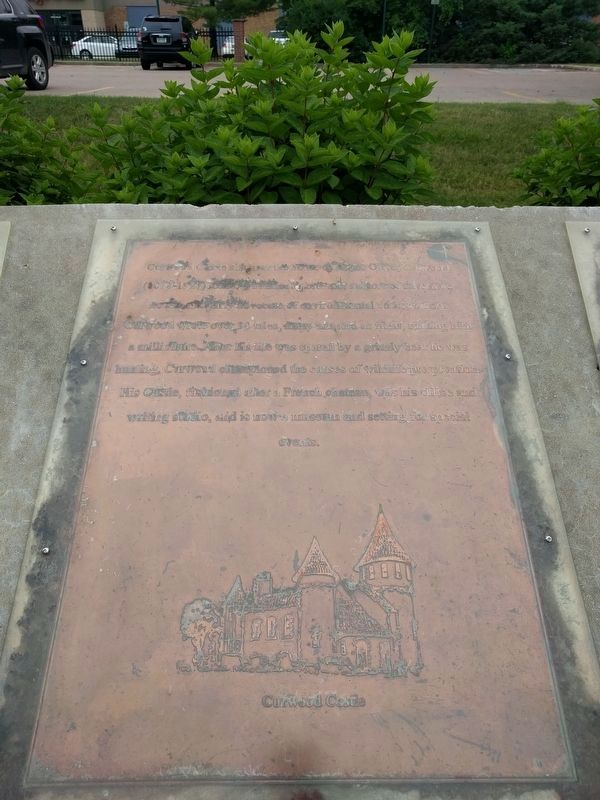 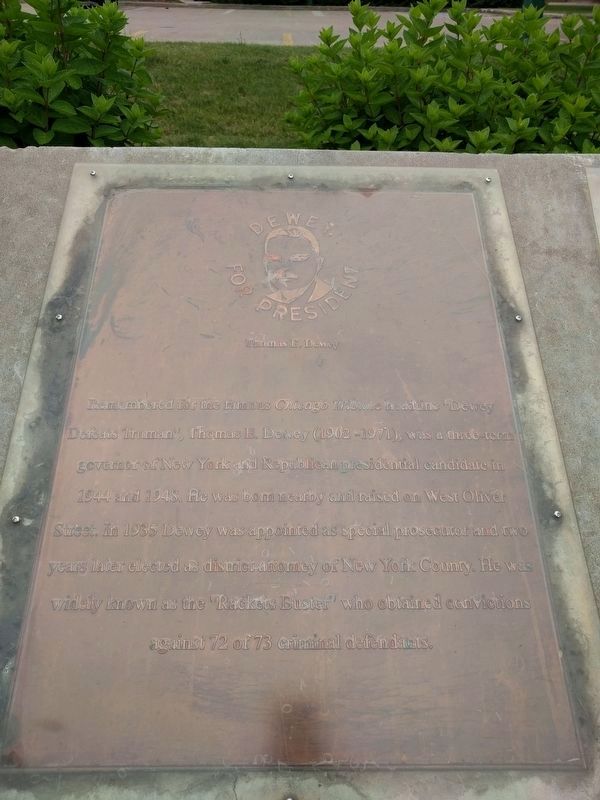 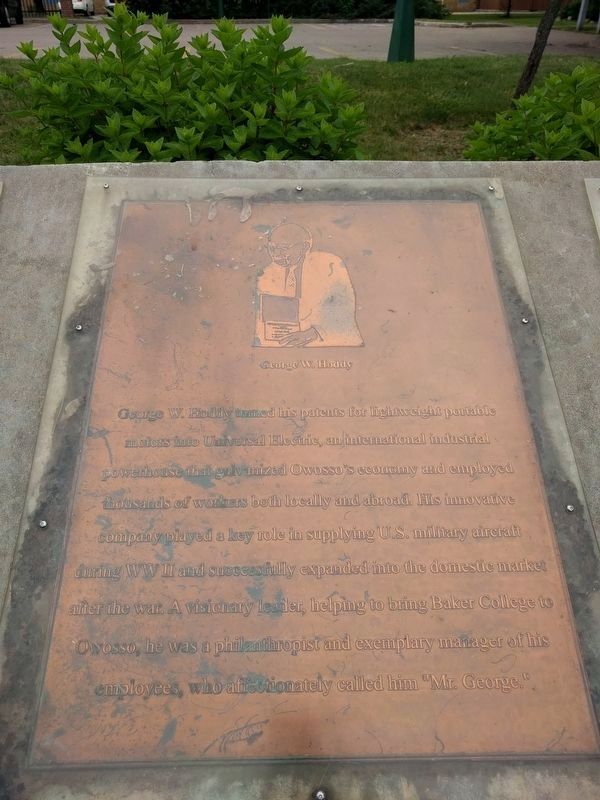 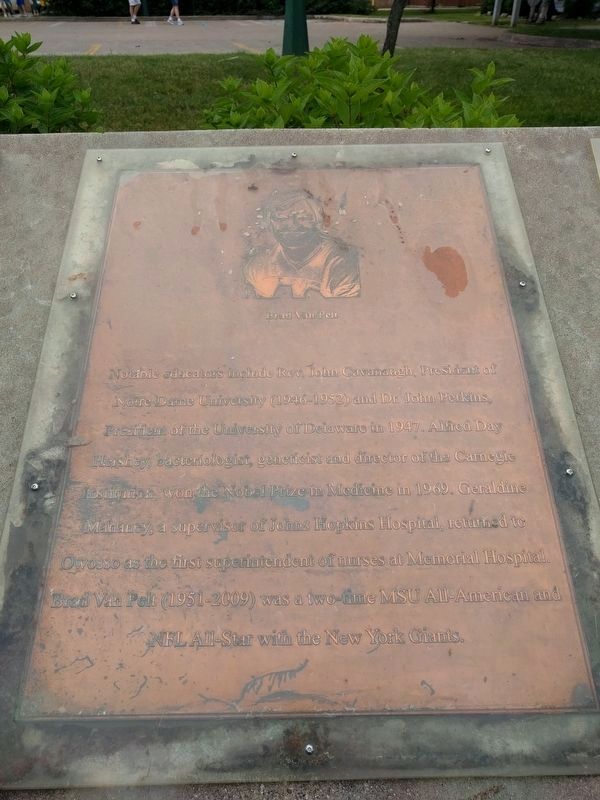 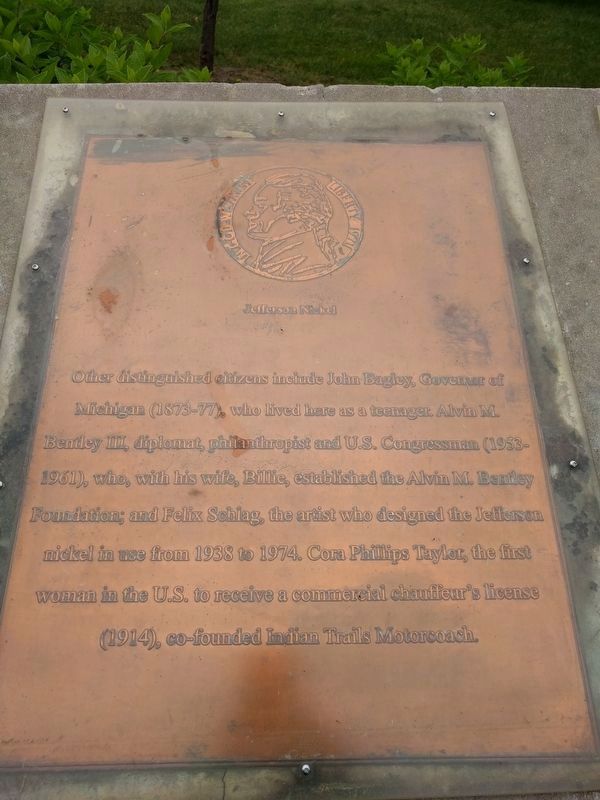 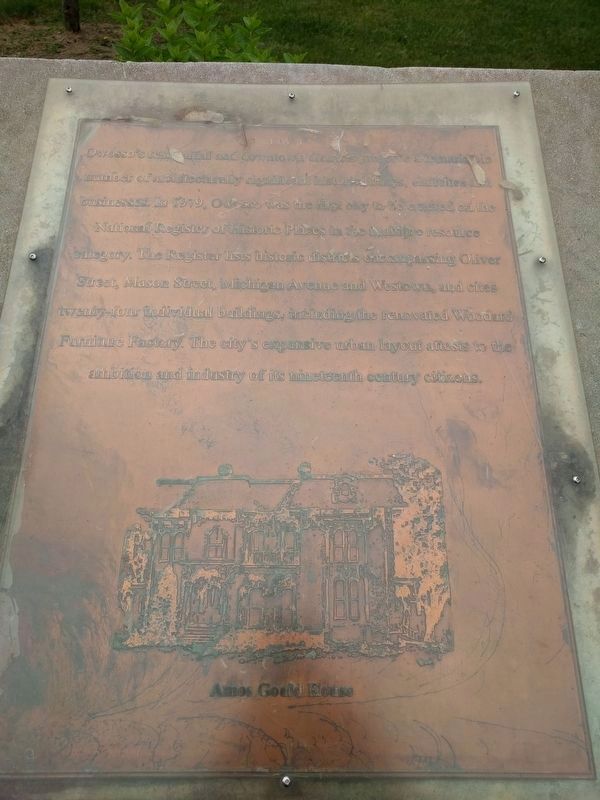 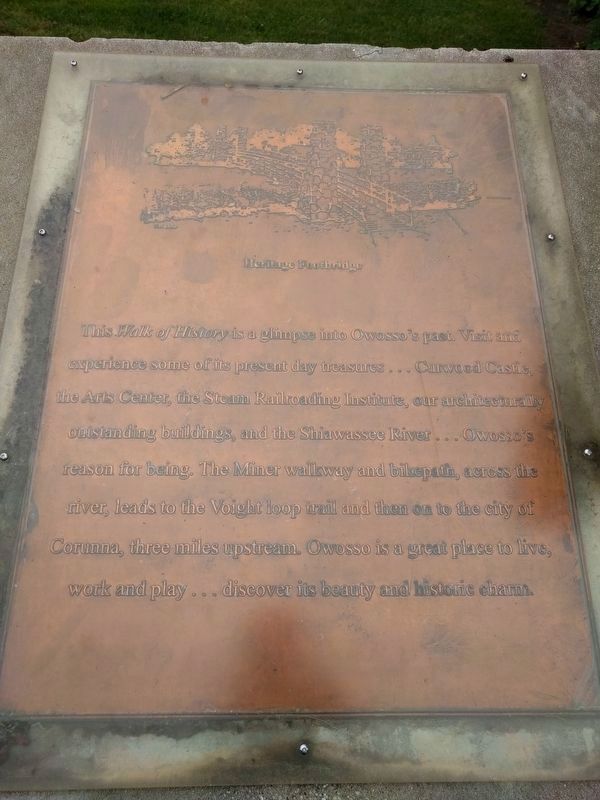 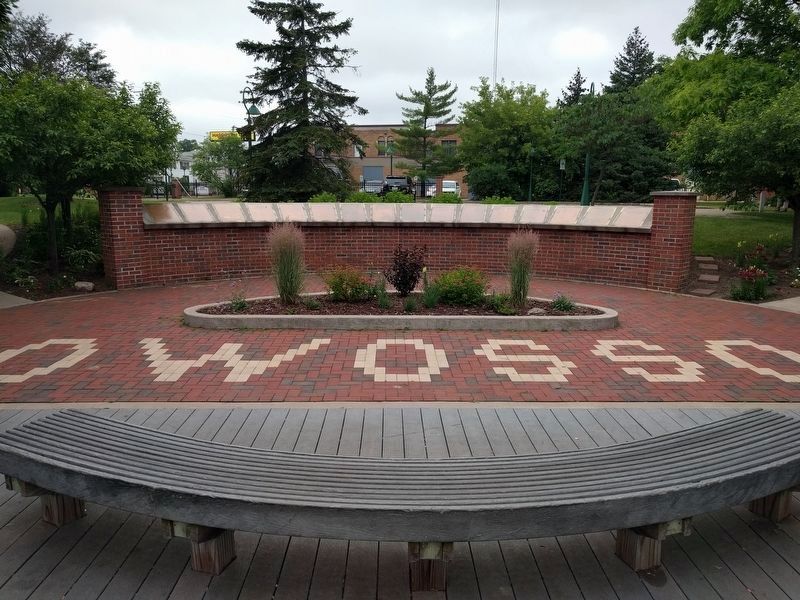