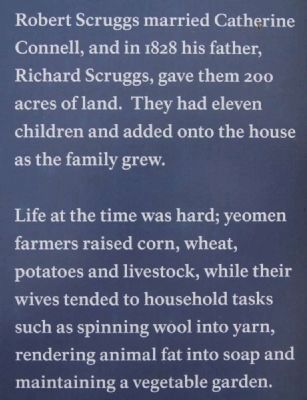 Photographed By Brian Scott, May 12, 2010
1. Robert Scruggs House Marker
Inscription.
The Robert Scruggs House. . , Robert Scruggs married Catherine Connell, and in 1828 his father, Richard Scruggs, gave them 200 acres of land. They had eleven children and added onto the house as the family grew. , Life at the time was hard; yeomen farmers raised corn, wheat, potatoes and livestock, while their wives tended to household tasks such as spinning wool into yarn, rendering animal fat into soap and maintaining a vegetable garden. . This historical marker was erected by National Park Service. It is Near Gaffney in Cherokee County South Carolina

Robert Scruggs married Catherine Connell, and in 1828 his father, Richard Scruggs, gave them 200 acres of land. They had eleven children and added onto the house as the family grew.

Life at the time was hard; yeomen farmers raised corn, wheat, potatoes and livestock, while their wives tended to household tasks such as spinning wool into yarn, rendering animal fat into soap and maintaining a vegetable garden.

Topics. This historical marker is listed in these topic lists: Landmarks • Settlements & Settlers. A significant historical year for this entry is 1828.

Location. 35° 7.884′ N, 81° 48.262′ W. Marker is near Gaffney, South Carolina, in Cherokee County. Marker can be reached from Chesnee Highway (State Highway 11) near Battleground Road (State Highway 110). This marker and House is in Cowpens National Battlefield. Touch for map. Marker is at or near this postal address: 4001 Chesnee Hwy, Gaffney SC 29341, United States of America. Touch for directions.

Other nearby markers. At least 8 other markers are within walking distance of this marker. "...A Most Dreary Appearance" (a few steps from this marker); From Pasture to Park (approx. ¼ mile away); Road to the Revolution 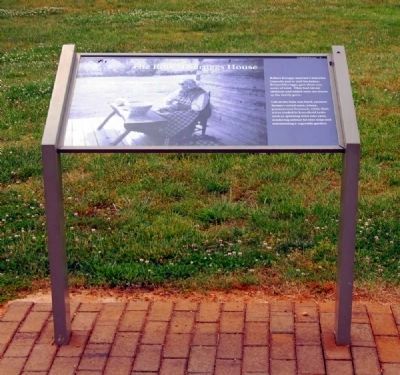 Also see . . .
1. Backcountry Lifestyles. When the first white settlers arrived in the western Carolinas, they found a terrain which had been home to Indians for generations. (Submitted on September 10, 2008, by Kevin W. of Stafford, Virginia.) 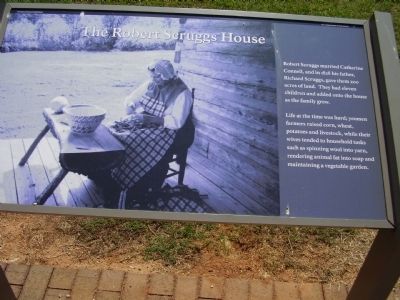 Additional commentary.
1. The Robert Scruggs House
Robert Scruggs, the builder of this cabin, was born just across the state line in North Carolina in 1800. around 1805, Robert's father, Richard Scruggs, moved his family to South Carolina and began farming near the Cowpens Battlefield. The Richard Scruggs home site is located about one half mile south of this cabin. Robert grew up working on his father's farm. Upon reaching manhood during the 1820s, the young farmer married Catherine Connel. In 1828, the new couple was given 200 acres of land by Richard Scruggs. On part of his 200 acres, Robert Scruggs raised this cabin for himself and Catherine and began the hard work of clearing, planting and harvesting. The sounds of children filled the cabin because the couple had three young boys by 1830 and eventually a total of eleven children.

The fields of the Scruggs farm were mostly planted in corn. Smaller plots were planted in wheat, rye, oats and sweet potatoes. Pigs and cattle were raised on the farm, but, they were not as numerous as the sheep grazing in the pastures. The farm was the main source of income for Robert Scruggs, however, he also ran a country store. His store stood on the other side of the Green 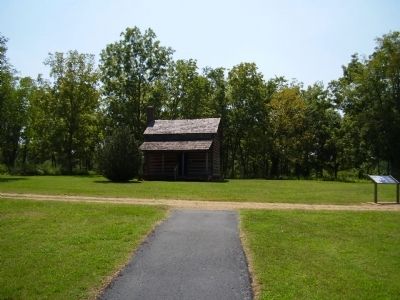 Photographed By Stanley and Terrie Howard, September 6, 2008
4. Robert Scruggs House
River Road which runs directly in front of the cabin. In May of 1847, Robert Scruggs was appointed postmaster of the newly established Cowpens Post Office. He retained this position until August 1859, when James H. Ezell replaced him and soon the Post Office became known as Ezells.

Robert Scruggs died in 1890 at the age of ninety. Catherine died less than two years later at the age of eighty-seven. The house passed down to their youngest son, James Scruggs and his wife, Mary. The expanded building remained in the family after their deaths when their daughter, Rosa Scruggs Garrett, inherited the home place. The National Park Service purchased the house and property from the granddaughter, Rosa, during the expansion of Cowpens National Battlefield in the mid 1970s.

The appearance of the Scruggs cabin had changed over the years from the time it was built in 1828. Log walls had been covered with paneling and additional rooms had been added onto the cabin.

Beginning during the earliest years of settlement before the Revolutionary War and continuing throughout the 1800s, cabins such as this one provided homes for most of the people living in the South Carolina Backcountry. Additions and modern improvements to the cabin were removed and Robert Scruggs' cabin was then restored. The sparse furnishings in the cabin are indicative of the type that might have been 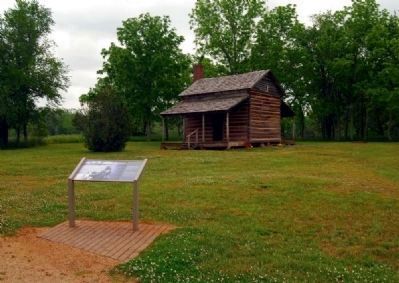 Photographed By Brian Scott, May 12, 2010
5. Robert Scruggs House and Marker
used in the 1850s. Take a few minutes to look back on the history of the Carolina Piedmont and our nation as you reflect on the life and times of the Scruggs family. (Source: Historical brochure available on site.)
— Submitted June 28, 2010, by Brian Scott of Anderson, South Carolina. 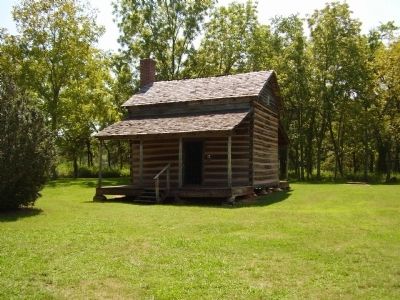 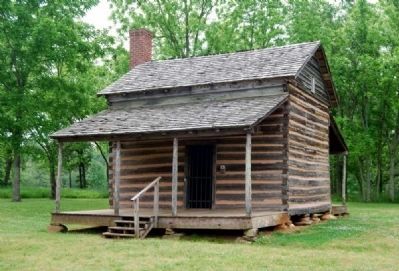 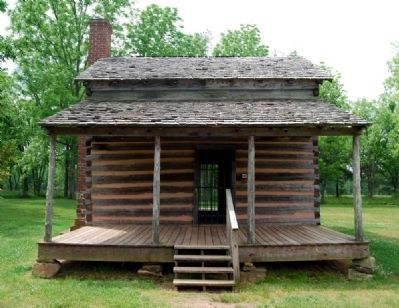 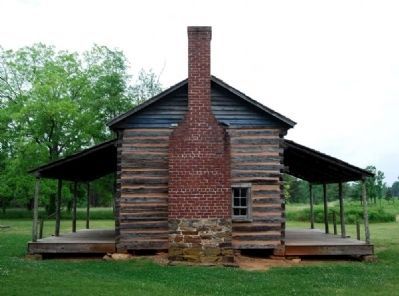 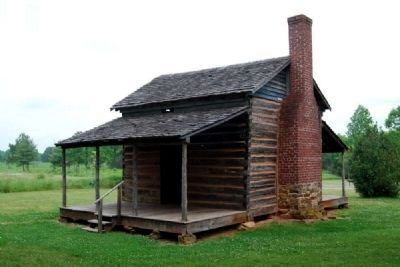 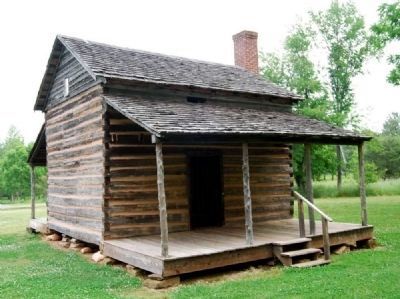 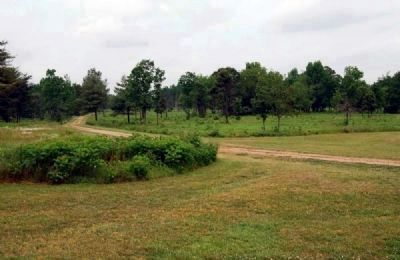 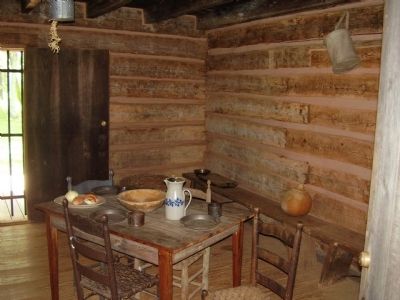 Photographed By Stanley and Terrie Howard, September 6, 2008
13. Furninshings of Scruggs Cabin
The furnishings in the cabin are indicative of the type that might have been used in the 1850's. 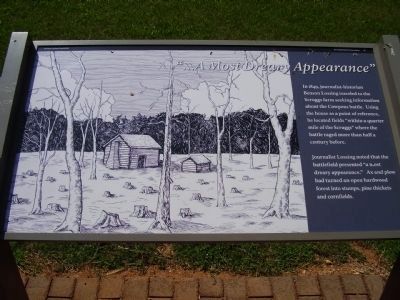