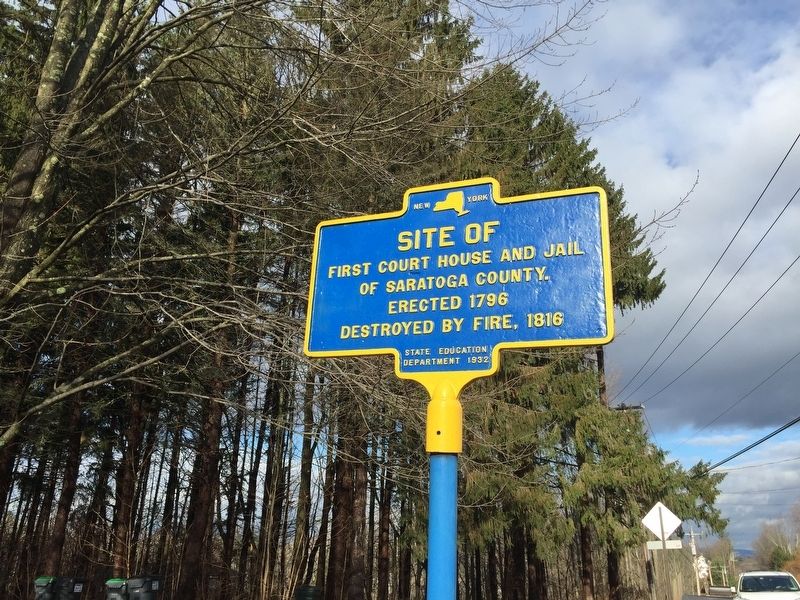 Location. 42° 58.95′ N, 73° 52.885′ W. Marker is in Ballston Spa, New York, in Saratoga County. Marker is on Middle Line Road, on the left when traveling north. Across from the road from colonial inn marker. Touch for map. Marker is in this post office area: Ballston Spa NY 12020, United States of America. Touch for directions.

Regarding Site of. This site is Court House Hill because of this early court house site. Middle Line Road predates the Revolution and was an important and well maintained road. The road was even a route of invasion by British and Indian forces in October 1780. The relatively central location of this slight hill made it a good place for the county courthouse in an age when people needed to walk everywhere. The court-house stood on the west side of the road, opposite a large dwelling-house, formerly a tavern. A contemporary said, “Around the court-house a thriving village was growing. Several stores and two hotels were erected, and did a 'land-office' business in court terms. Two lawyers - John W. Taylor and Samuel Cook - displayed their shingles there.” The court-house and jail burned to the ground on the morning of the Sunday preceding March 27, 1816 - closing the village prospects of the Hill. George Billings, a prisoner chained to the floor, lost his life.