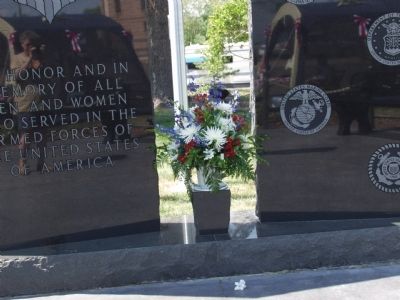 Photographed By Tim Franklin, 2005
1. Sandstone Veterans Memorial Marker
Inscription.
Sandstone Area Veterans Memorial. . In honor and in memory of all men and women who served in the Armed Forces of the United States of America . This memorial was erected in 2006. It is in Sandstone in Pine County Minnesota

Topics. This historical marker and memorial is listed in these topic lists: Heroes • Military.

Location. 46° 7.924′ N, 92° 52.045′ W. Marker is in Sandstone, Minnesota, in Pine County. Marker is at the intersection of Main Street (County Road 64) and 4th Street, on the left when traveling north on Main Street. Memorial is in Railroad Park. Touch for map. Marker is in this post office area: Sandstone MN 55072, United States of America. Touch for directions.

Other nearby markers. At least 2 other markers are within 9 miles of this marker, measured as the crow flies. Lumbering in Minnesota (approx. 5.7 miles away); The Great Hinckley Fire (approx. 8.8 miles away). 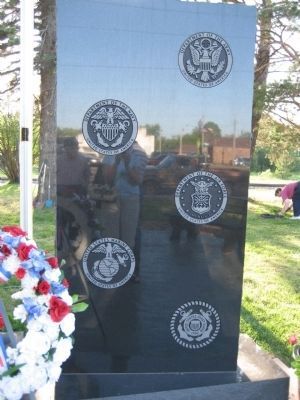 Editor’s want-list for this marker. Clearer photos of monuments and area photo of monument in context. • Can you help?
Share this page.