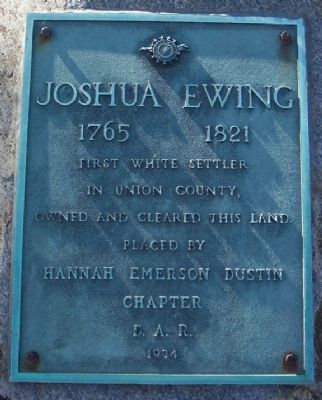 Topics and series. This historical marker is listed in this topic list: Settlements & Settlers. In addition, it is included in the Daughters of the American Revolution (DAR) series list. 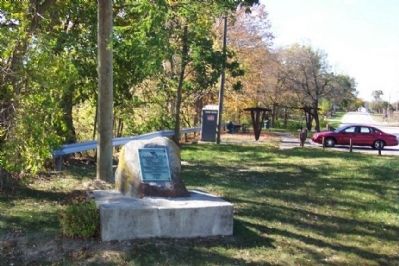 Regarding Joshua Ewing. Jonathan Alder is credited with being the first settler in Jerome Township, though he was not a willing settler. He was a captive of the local Indians. He arrived in the area prior to 1795. In 1805 he was reunited with his mother in Virginia, and he settled in Madison County upon his return to Ohio. James and Joshua Ewing were the first permanent settlers in the area in 1798.

Related marker. Click here for another marker that is related to this marker. A marker for Jonathan Alder, mentioned above.

Also see . . .  History of Union County - Early Settlements. To Joshua and James Ewing, two brothers, belong the honor of making the first settlement in what is now Union County and in Jerome Township. Accounts all agree that they settled permanently on Big Darby in the year 1798, but it is also said that two or three years prior to this date... (Submitted on October 23, 2008, by Kevin W. of Stafford, Virginia.)
Credits. This page was last revised on December 2, 2019. It was originally submitted on October 22, 2008, by William Fischer, Jr. of Scranton, Pennsylvania. This page has been viewed 1,145 times since then and 53 times this year. Photos:   1, 2. submitted on October 22, 2008, by William Fischer, Jr. of Scranton, Pennsylvania. • Kevin W. was the editor who published this page.
Share this page.