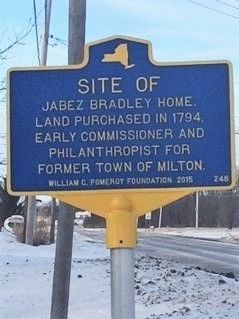 January 29, 2019
1. Site Of Marker
Inscription.
Site Of. . Jabez Bradley home. Land purchased in 1794. Early commissioner and philanthropist for former Town of Milton. . This historical marker was erected in 2015 by William G. Pomeroy Foundation. It is in King Ferry in Cayuga County New York

Topics and series. This historical marker is listed in this topic list: Settlements & Settlers. In addition, it is included in the William G. Pomeroy Foundation series list.

Click or scan to see
this page online
In 1794 Jabez Bradley purchased the land on which his home once stood, part of the Town of Milton, now Genoa, formed in 1789. Town records show Bradley’s involvement in local government from 1794 until shortly before his death in 1817, holding various elected positions as a Commissioner of Highways, Overseer of Highways, Fence Viewer and Poundkeeper. In 1805, Bradley gave land to the Union Society, later the First Presbyterian Church of Genoa of which he was a founding member, to construct a meeting house. Between 1805 and 1806, Bradley provided building materials and paid many of the workers to construct the new meeting house. His account books further show his philanthropic contributions to his community as he also paid for shingles and siding for the town’s new schoolhouse, as well as room and board for the workers.
Credits. This page was last revised on April 30, 2019. It was originally submitted on April 30, 2019, by Deryn Pomeroy of Syracuse, New York. This page has been viewed 131 times since then and 11 times this year. Photo   1. submitted on April 30, 2019, by Deryn Pomeroy of Syracuse, New York. • Andrew Ruppenstein was the editor who published this page.

Editor’s want-list for this marker. Photo of marker within its surroundings • Can you help?
Share this page.