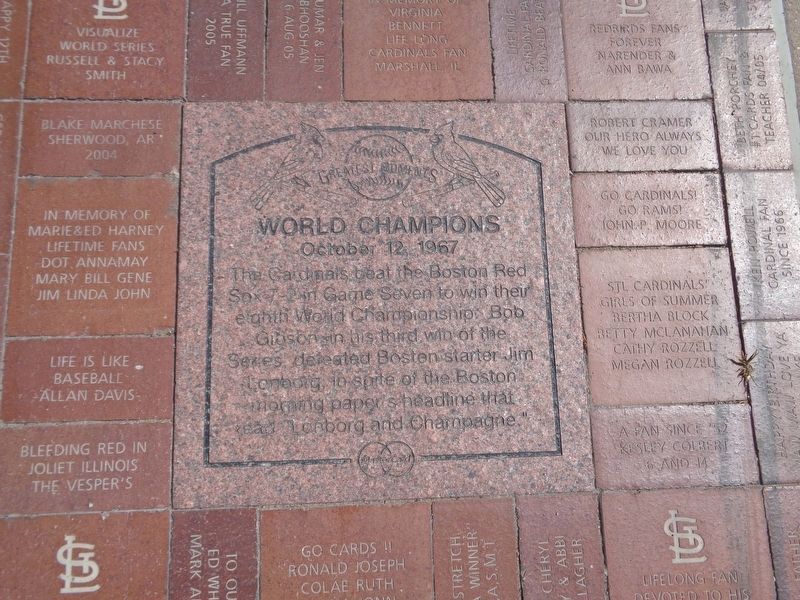 The Cardinals beat the Boston Red Sox 7-2 in Game Seven to win their eighth World Championship. Bob Gibson, in his third win of the Series, defeated Boston starter Jim Lonborg, in spite of the Boston morning paper's headline that read "Lonborg and Champagne."

Topics and series. This historical marker is listed in these topic lists: Communications • Sports. In addition, it is included in the Missouri, St. Louis Cardinals Greatest Moments series list.

Also see . . .  1967 World Series on Wikipedia. Gives details about the legendary series, which was the first World Series win for the Cardinals while making their home at the "new" Busch Stadium. It was considered to be a rematch of the 1946 World Series, in which the Cardinals played against the Red Sox. The Sox lost both the 1946 and 1967 series, but would later have their revenge decades later in the 2004 (where they broke the so-called "Curse of the Bambino") and 2013 World Series games, where they both won against the Cardinals. (Submitted on July 23, 2020, by Jason Voigt of Glen Carbon, Illinois.)

Additional keywords. baseball, Major League Baseball
Credits. This page was last revised on July 23, 2020. It was originally submitted on May 3, 2019, by Devry Becker Jones of Washington, District of Columbia. This page has been viewed 66 times since then and 3 times this year. Photo   1. submitted on July 23, 2020, by Jason Voigt of Glen Carbon, Illinois.
Share this page.