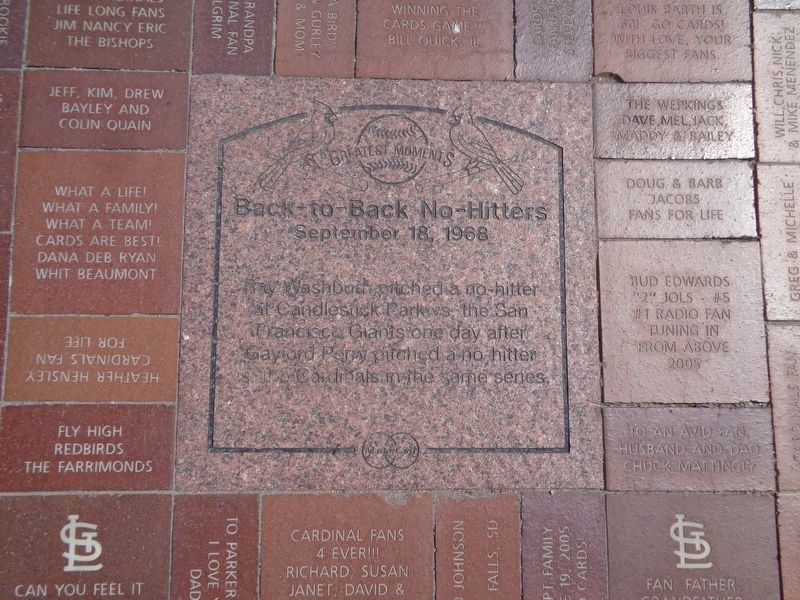 Photographed By Jason Voigt, June 17, 2020
1. Back-to-Back No-Hitters Marker
Inscription.
Back-to-Back No-Hitters. September 18, 1968. Ray Washburn pitched a no-hitter at Candlestick Park vs. the San Francisco Giants one day after Gaylord Perry pitched a no-hitter vs. the Cardinals in the same series. . This historical marker is in St. Louis Missouri

Topics and series. This historical marker is listed in this topic list: Sports. In addition, it is included in the Missouri, St. Louis Cardinals Greatest Moments series list.

Click or scan to see
this page online
This was the first time in Major League history that back-to-back no-hitters had been pitched in the same series.

Additional keywords. baseball, Major League Baseball
Credits. This page was last revised on July 23, 2020. It was originally submitted on May 3, 2019, by Devry Becker Jones of Washington, District of Columbia. This page has been viewed 146 times since then and 65 times this year. Photo   1. submitted on July 23, 2020, by Jason Voigt of Glen Carbon, Illinois.
Share this page.