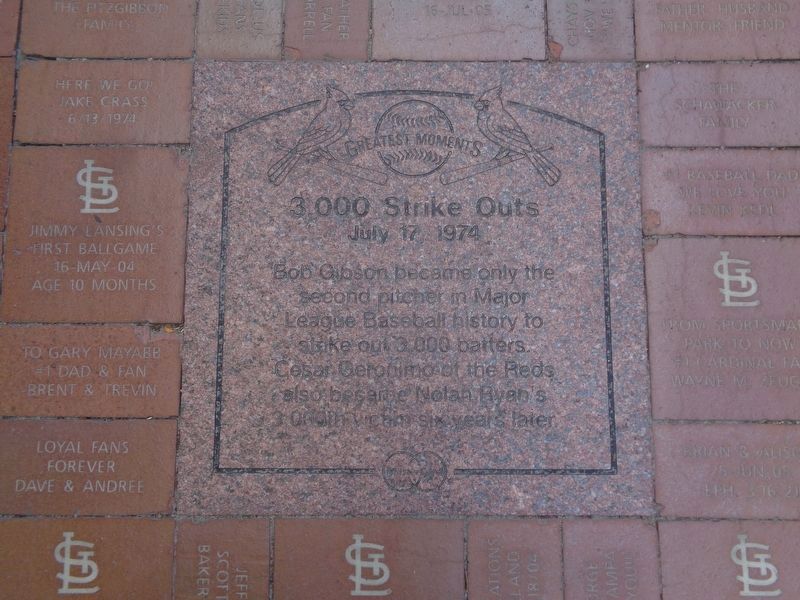 Topics and series. This historical marker is listed in this topic list: Sports. In addition, it is included in the Missouri, St. Louis Cardinals Greatest Moments series list. A significant historical date for this entry is July 17, 1974.

Click or scan to see
this page online
3,000 strikeout club. The first Major League Baseball pitcher to pitch 3,000 strikeouts in his career was Walter Johnson on July 22, 1923. As noted on the plaque, Gibson was only the second to achieve that feat. They would later be joined by Gaylord Perry in 1978. As of 2020, the 3,000 strikeout club has 18 members, many of which are in the Baseball Hall of Fame; one active ballplayer (Justin Verlander) is included. (Submitted on July 24, 2020, by Jason Voigt of Glen Carbon, Illinois.)
Credits. This page was last revised on July 24, 2020. It was originally submitted on May 4, 2019, by Devry Becker Jones of Washington, District of Columbia. This page has been viewed 121 times since then and 8 times this year. Photo   1. submitted on July 24, 2020, by Jason Voigt of Glen Carbon, Illinois.
Share this page.