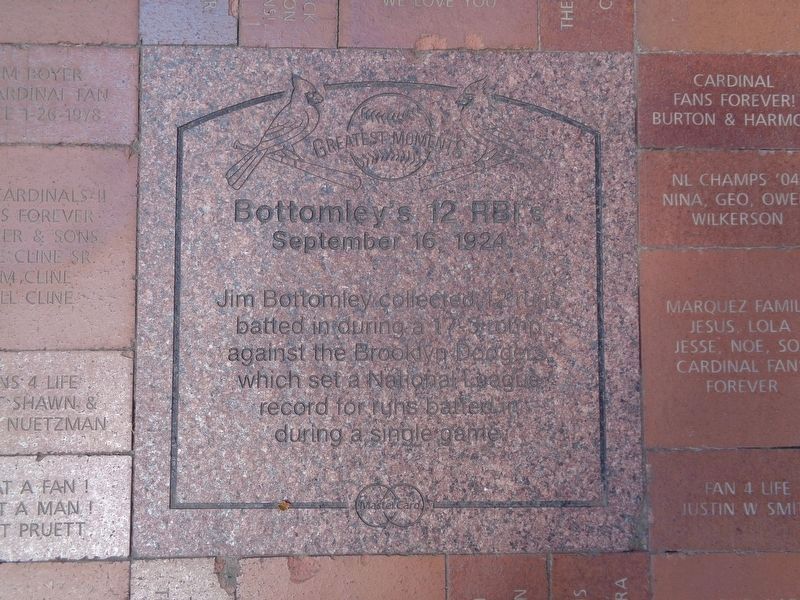 Jim Bottomley collected 12 runs batted during a 17-3 romp against the Brooklyn Dodgers, which set a National League record for runs batted in during a single game.

Topics and series. This historical marker is listed in this topic list: Sports. In addition, it is included in the Missouri, St. Louis Cardinals Greatest Moments series list. A significant historical date for this entry is September 16, 1924.

Click or scan to see
this page online
Jim Bottomley on Wikipedia. Bottomley (1900-1959), as of September 2020, holds the MLB record today for most runs batted in during one game; however, this was later tied by Mark Whiten (also a Cardinal) on September 7, 1993. Bottomley is also known as the only man to be sued for hitting a home run when a fan was hit by the ball when he was not looking. He was elected posthumously to the Baseball Hall of Fame in 1974 by the Veterans Committee, as well as being elected to the Cardinals Hall of Fame in 2014. (Submitted on September 3, 2020, by Jason Voigt of Glen Carbon, Illinois.)
Credits. This page was last revised on September 3, 2020. It was originally submitted on May 4, 2019, by Devry Becker Jones of Washington, District of Columbia. This page has been viewed 78 times since then and 9 times this year. Photo   1. submitted on September 3, 2020, by Jason Voigt of Glen Carbon, Illinois.
Share this page.