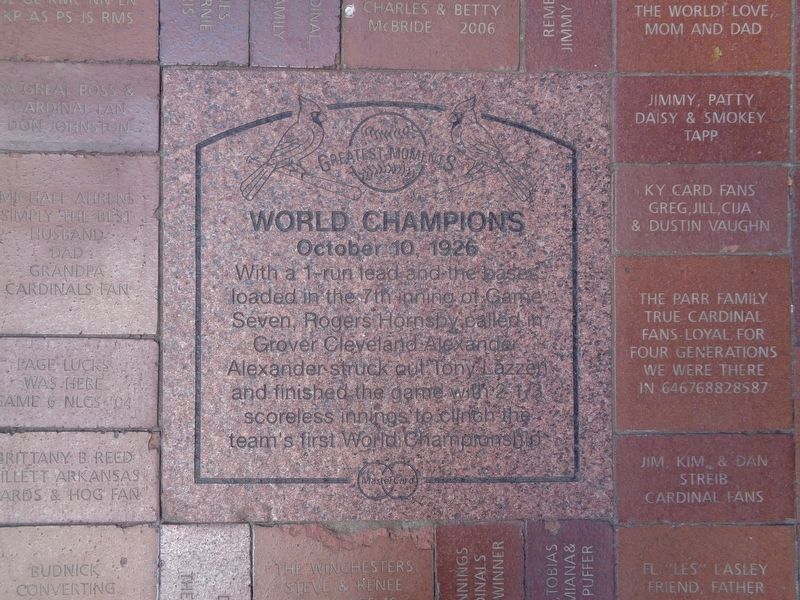 With a 1-run lead and the bases loaded in the 7th inning of Game Seven, Rogers Hornsby called in Grover Cleveland Alexander. Alexander struck out Tony Lazzen and finished the game with 2 1/3 scoreless innings to clinch the team's first World Championship.

Topics and series. This historical marker is listed in this topic list: Sports. In addition, it is included in the Missouri, St. Louis Cardinals Greatest Moments series list. A significant historical date for this entry is October 10, 1926.

Also see . . .  1926 World Series on Wikipedia. Not only was it the St. Louis Cardinals' first appearance at the World Series, but it was also their first of 11 World Championship wins. This was the only World Series that ended with a baserunner being caught stealing. Rogers Hornsby caught Babe Ruth at that moment. (Submitted on September 3, 2020, by Jason Voigt of Glen Carbon, Illinois.)

Additional keywords. baseball, Major League Baseball, St. Louis Cardinals
Credits. This page was last revised on September 3, 2020. It was originally submitted on May 4, 2019, by Devry Becker Jones of Washington, District of Columbia. This page has been viewed 83 times since then and 6 times this year. Photo   1. submitted on September 3, 2020, by Jason Voigt of Glen Carbon, Illinois.
Share this page.