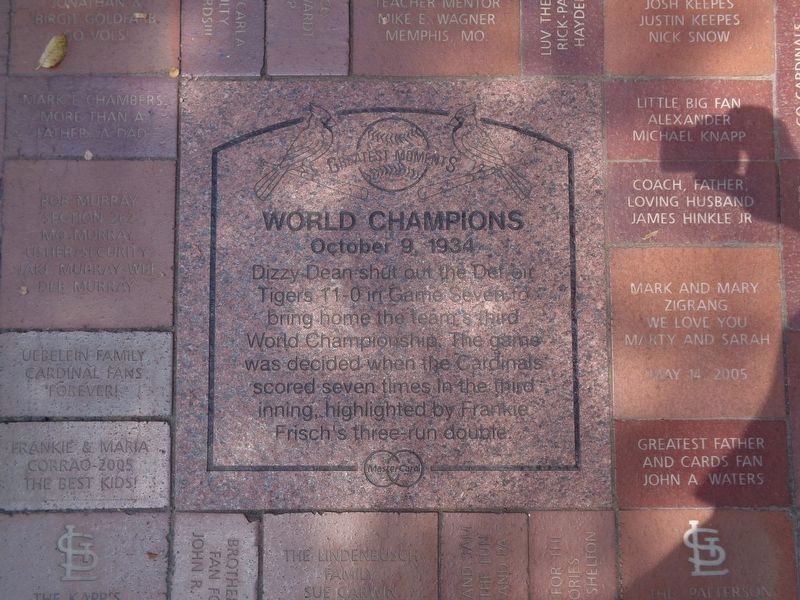 Dizzy Dean shut out the Detroit Tigers 11-0 in Game Seven to bring home the team's third World Championship. The game was decided when the Cardinals scored seven times in the third inning highlighted by Frankie Frisch's three-run double.

Topics and series. This historical marker is listed in this topic list: Sports. In addition, it is included in the Missouri, St. Louis Cardinals Greatest Moments series list. A significant historical date for this entry is October 9, 1934.

Also see . . .  1934 World Series on Wikipedia. The St. Louis Cardinals beat the Detroit Tigers in seven games (4-3). The Cardinals were led by the Dean brothers (Dizzy and Paul "Daffy"), and the team was known as the "Gashouse Gang" during that season because of their dirty uniforms and humorous nature. (Submitted on October 29, 2020, by Jason Voigt of Glen Carbon, Illinois.)

Additional keywords. baseball, Major League Baseball
Credits. This page was last revised on October 29, 2020. It was originally submitted on May 4, 2019, by Devry Becker Jones of Washington, District of Columbia. This page has been viewed 85 times since then and 4 times this year. Photo   1. submitted on October 29, 2020, by Jason Voigt of Glen Carbon, Illinois.
Share this page.