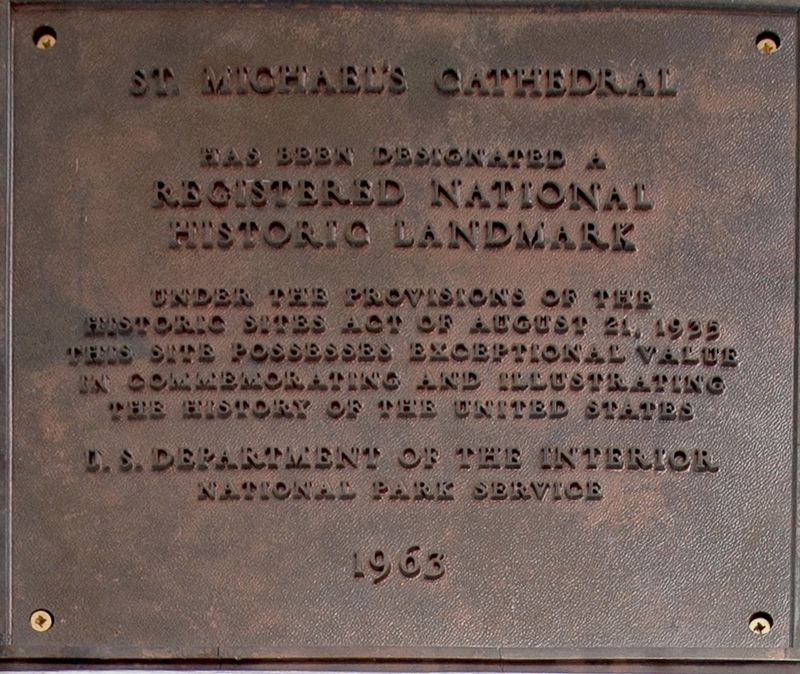 Photographed By Alvis Hendley, May 16, 2011
1. St. Michael's Cathedral Marker
Inscription.
St. Michael's Cathedral. . , Has been designated a Registered National Historic Landmark , Under the provisions of the Historic Sites Act of August 21, 1935 , This site possesses exceptional value in commemorating and illustrating the history of the United States . This historical marker was erected in 1963 by U.S. Department of the Interior, National Park Service. It is in Sitka in Sitka Borough Alaska

Has been designated a Registered National Historic Landmark

Under the provisions of the Historic Sites Act of August 21, 1935

Erected 1963 by U.S. Department of the Interior, National Park Service.

Topics and series. This historical marker is listed in this topic list: Churches & Religion. In addition, it is included in the National Historic Landmarks series list. A significant historical year for this entry is 1844. 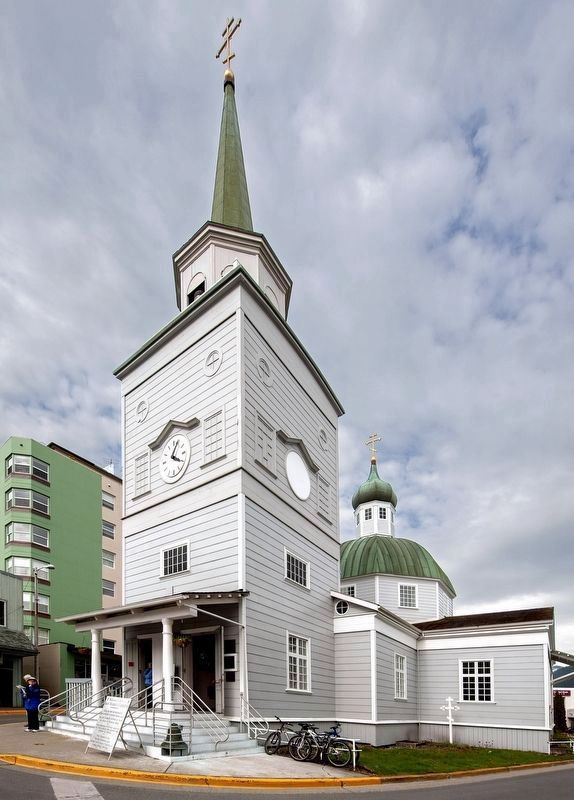 Photographed By Alvis Hendley, May 16, 2011
2. The markers are mounted beside the front door.

More about this marker. Marker is mounted on the church beside the front door.

Regarding St. Michael's Cathedral.
The Cathedral of St. Michael the Archangel was listed on the NRHP in 1966. The nomination reads in part:

Sitka was the capital of Russian America from 1808 until 1906. The Cathedral of St. Michael the Archangel was at the center of Russian cultural influence in 19th century North America.

The Cathedral of St. Michael the Archangel is an excellent example of Russian church architecture, incorporating classic Russian features of the cruciform design with elements of the Italian Rococo which was popular in Russia in the early 19th century.

The cathedral was designed by the first Bishop of Alaska, Bishop Innocent, who was known for his religious writings as well as works on Alaskan ethnography, linguistics and history. Innocent was declared a saint by the Orthodox Christian church in 1977.

The present building is a reconstruction 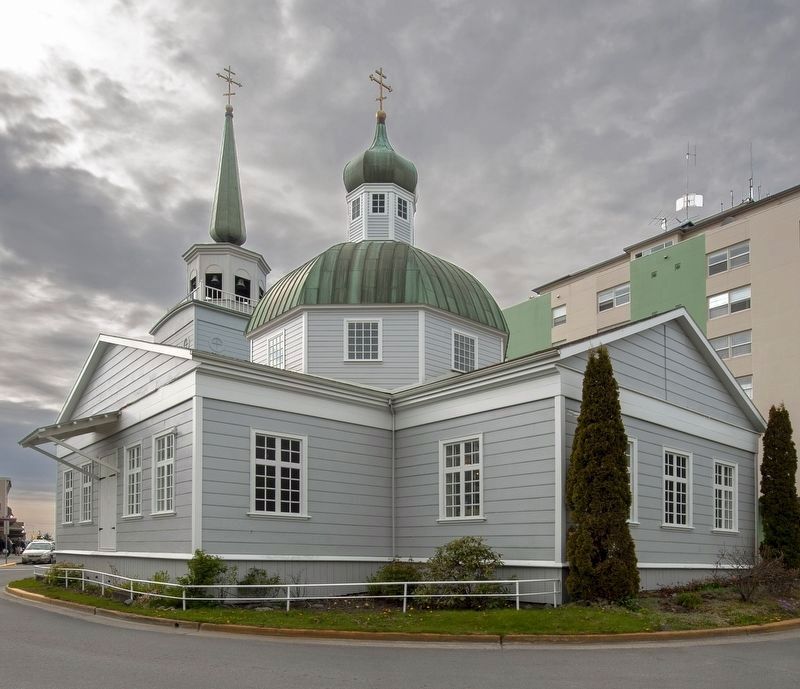 Photographed By Alvis Hendley, May 16, 2011
3. Cathedral of St. Michael the Archangel from the Rear
of the original which was built in 1844 and destroyed by fire in 1966. The structure was rebuilt on the original site based on detailed drawings of the original structure. Most of the ikons and religious artifacts were saved from destruction.

The cathedral was the largest and most imposing religious edifice in Alaska until well into the 20th century. It remains a house of worship and the seat of the Orthodox Bishop of Sitka and Alaska. 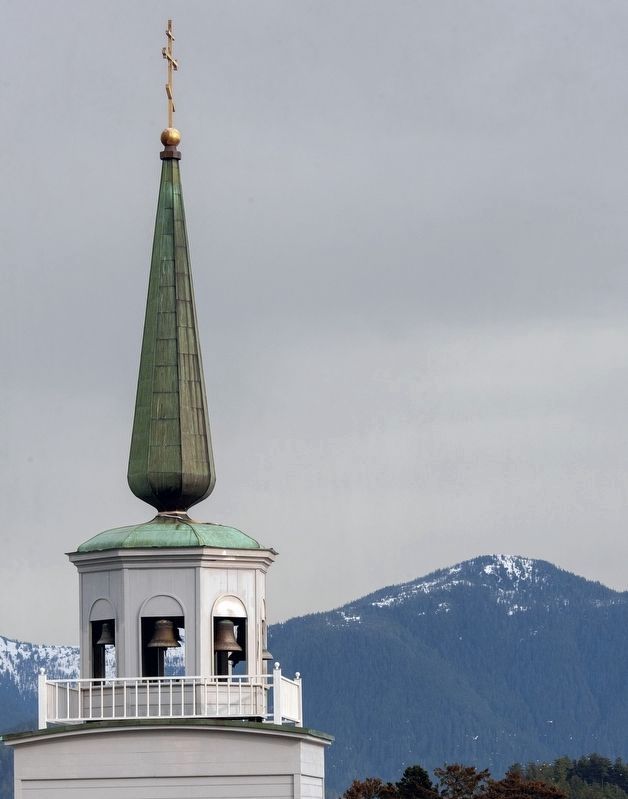 Photographed By Alvis Hendley, May 16, 2011
4. Cathedral of St. Michael the Archangel 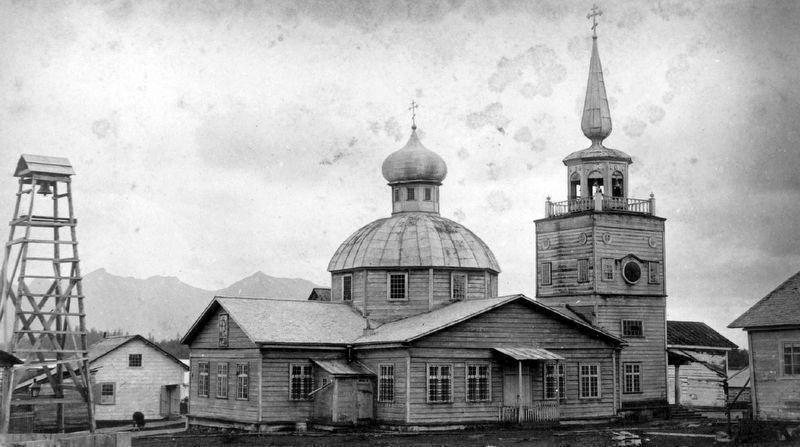 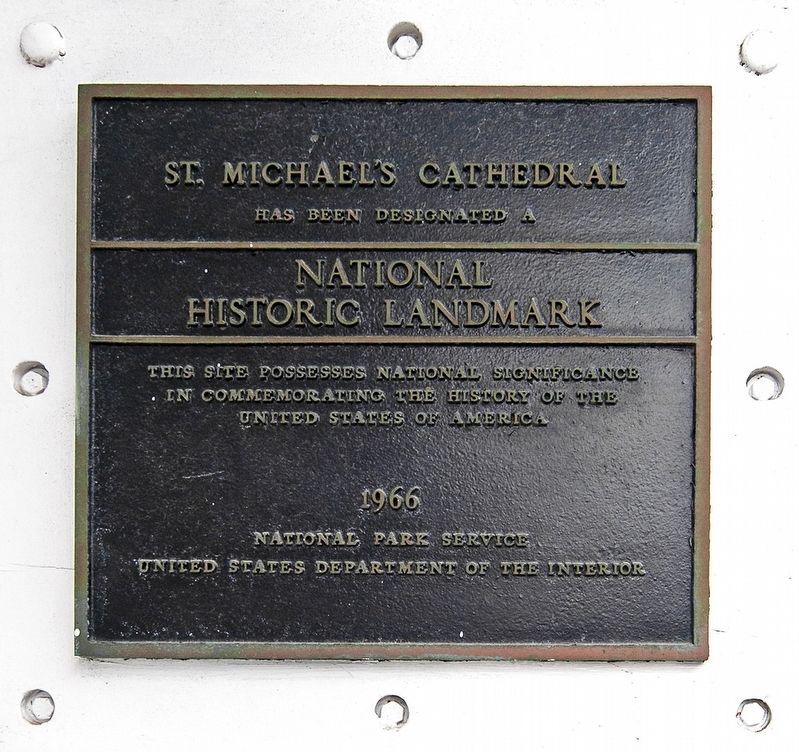