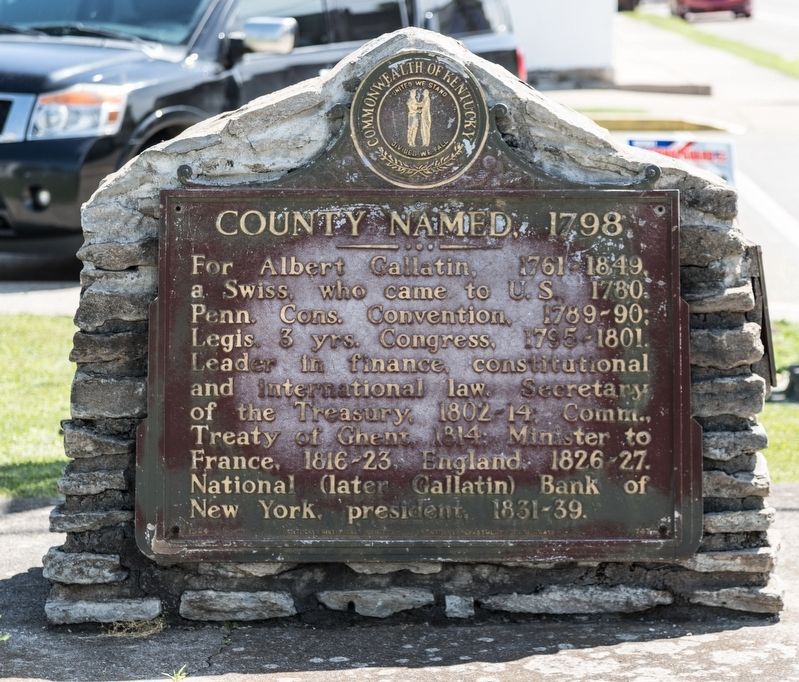 Topics and series. This historical marker is listed in these topic lists: Government & Politics • Peace. In addition, it is included in the Kentucky Historical Society series list. A significant historical year for this entry is 1798. 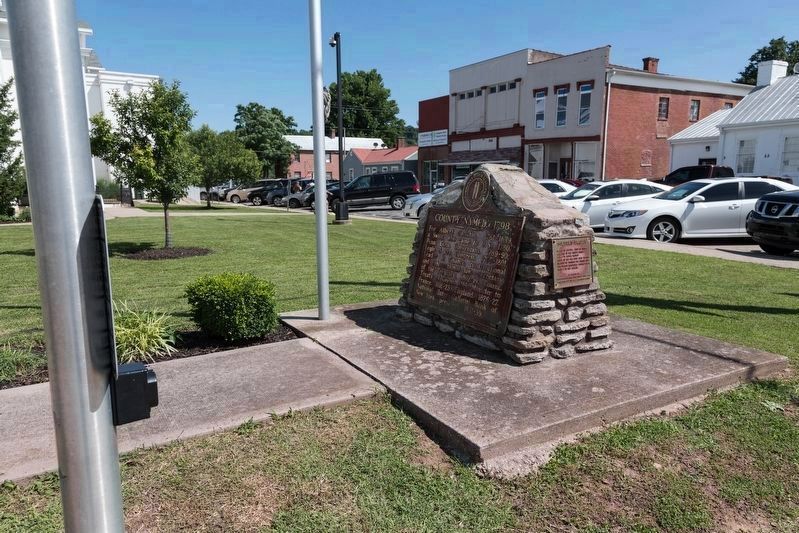 Photographed By J. J. Prats, June 12, 2019
2. County Named Galatin face of monument
The Governor from Warsaw marker has been bolted to the other side of the stacked stone and mortar monument.

The small plaque on the side of the monument is titled “Soldier’s Prayer” and placed by the Gallatin Fort No. 145, American Legion, in memory of servicemen of Gallatin County since 1798. It reads,

Oh God of Battle, Lord of Might—
A sentry in the silent night—
I, who’ve never prayed
Kneel on the dew damp sand to say:
Oh, keep me through the coming day!
But, please remember, though I pray,
That I am not afraid.

Also see . . .  Wikipedia entry for Albert Gallatin. “Gallatin returned to Congress to represent Pennsylvania in the Senate in 1795 after winning election to the House of Representatives. He became the chief spokesman on financial matters for the Democratic-Republican Party, leading opposition to the Federalist economic program. Gallatin’s mastery of public finance led to his choice as Secretary of the Treasury by President Thomas Jefferson, despite Federalist attacks that he was a ‘foreigner’ with a French accent. Under Jefferson and James Madison, Gallatin served as secretary from 1801 until February 1814. Gallatin retained much of Hamilton's financial system, though he also presided over a reduction in the national debt prior to the War of 1812. Gallatin served on the American commission that agreed to the Treaty of Ghent, which ended the War of 1812. In the aftermath of the war, he helped found the Second Bank of the United States.” (Submitted on July 2, 2019.)
Credits. This page was last revised on July 2, 2019. It was originally submitted on July 2, 2019, by J. J. Prats of Powell, Ohio. This page has been viewed 115 times since then and 9 times this year. Photos:   1, 2. submitted on July 2, 2019, by J. J. Prats of Powell, Ohio.
Share this page.