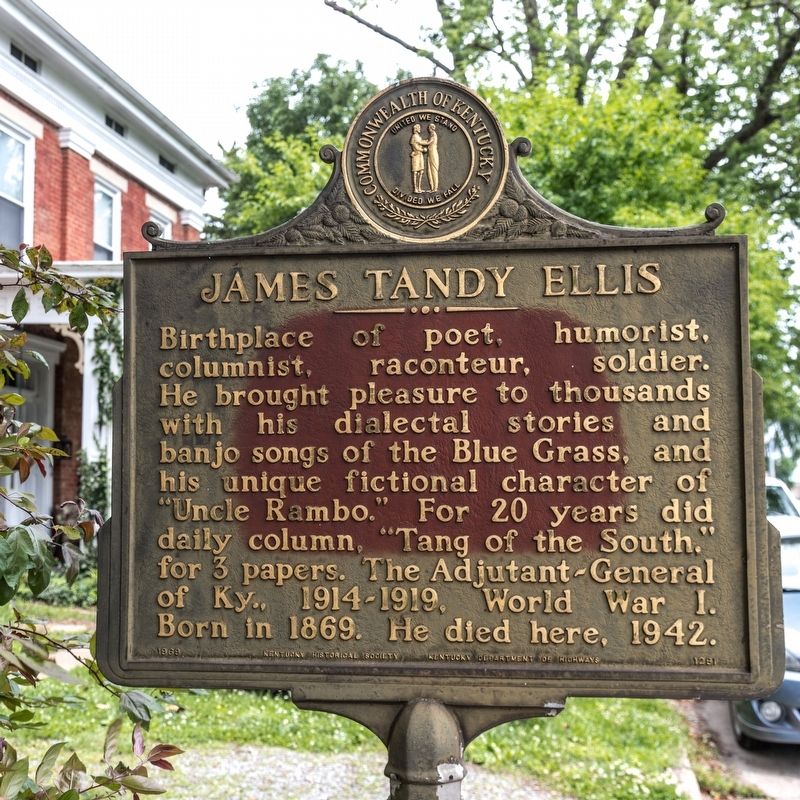 Photographed By J. J. Prats, June 12, 2019
1. James Tandy Ellis Marker
Inscription.
James Tandy Ellis. . Birthplace of poet, humorist, columnist, raconteur, soldier. He brought pleasure to thousands with his dialectal stories and banjo songs of the Blue Grass, and his unique fictional character of “Uncle Rambo.” For 20 years did daily column, “Tang of the South,” for 3 newspapers. The Adjutant-General of Kentucky, 1914-1919, World War I. Born in 1869. He died here, 1942. . This historical marker was erected in 1969 by Kentucky Historical Society and Kentucky Department of Highways. It is in Ghent in Carroll County Kentucky

Birthplace of poet, humorist, columnist, raconteur, soldier. He brought pleasure to thousands with his dialectal stories and banjo songs of the Blue Grass, and his unique fictional character of “Uncle Rambo.” For 20 years did daily column, “Tang of the South,” for 3 newspapers. The Adjutant-General of Kentucky, 1914-1919, World War I. Born in 1869. He died here, 1942.

Topics and series. This historical marker is listed in these topic lists: Arts, Letters, Music • Communications • Entertainment • War, World I. In addition, it is included in the Kentucky Historical Society series list. A significant historical year for this entry is 1869. 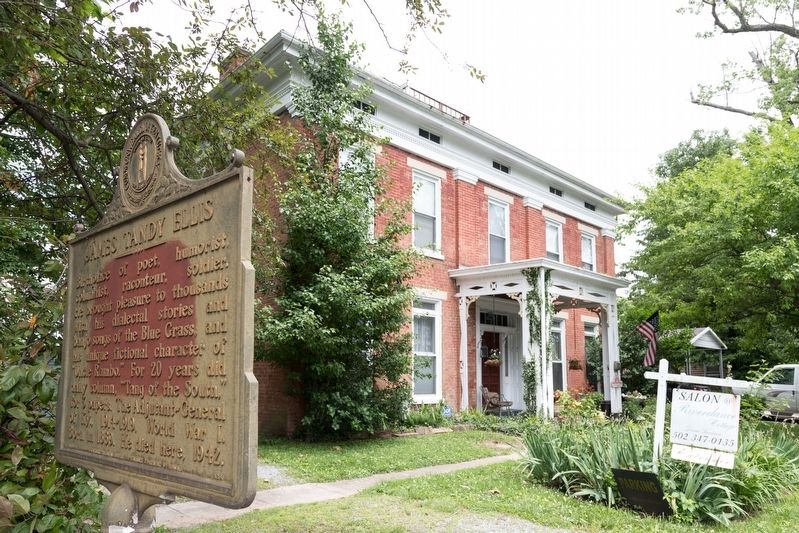 Click or scan to see
this page online
. Marker is at or near this postal address: 501 Main St, Ghent KY 41045, United States of America. Touch for directions.

Additional commentary.
1. Tang of the South — The Cure
A pre-1924 column by James Tandy Ellis published in The Louisville Times.


I met Dr. F. H. Clarke, one of the leading physicians of Lexington, at old Pizgah Church one day last summer. "Doctor," I said, "please tell me the secret of your fine health."

"Keep up a big bluff, and beware of doctors," he said with a hearty laugh.

There are many kinds of doctors, allopaths, homeopaths, magic healers, "yarb" doctors and Christian Science. The best men in the profession despise quacks, and hold their art of healing in the high 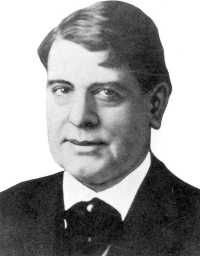 3. James Tandy Ellis (1868–1942)
sense of honor. There are many old fellows who are obsessed with chronic troubles, real or imaginary, which the best doctors turn down, when they find that their services will not bring a cure.

Old Jasper Sales was telling me about old Clint Edge. "Clint," said Jasper, "imagined that he was goin' fast to the grave, and done more complainin' than anybody in the neighborhood. The doctors couldn't find anything the matter with him, but Clint swore there was. He tried every doctor in fifty miles of his home, and as he had plenty of money, it didn't hurt for him to keep on tryin'. One time he heard of a doctor up on the Big Sandy and he went up there, but in about a month they fetched him down home on a log raft. He went up in Indiana after that to see a so-called doctor, and he had Clint layin' out in the yard on a shuck mattress-bed. He was a faith-healer, and one morning he goes to Clint and says, 'Take up your bed and walk!' Clint says, 'I wouldn't take up that dam shuck bed and walk four steps with it!'

"Clint comes back home and says he wants to git in his old bed. There's a whole passel of foolishness about this bed business, lots of people say they can't sleep nowheres but in their own bed. I've seen beds that sagged in the middle till your back would rest on the floor, and I've seen 'em sagged down in front, a man's head restin' on the floor and his feet stickin' up like he'd been throwed in a sink-hole. And there's a whole passel of foolishness about this home cookin', fer about half of the people don't know nothin' about cookin'. Johnnie Winfrey's gal come home from school and was cooking her daddy an egg and she drapped a passel of cigarette ashes on the egg and when old man Winfrey et it he swore he was a goin' to change the breed of his hens.

" 'But to git back to Clint. He finally goes down to see a hermit doctor on Green River. This feller doctors him two weeks and one mornin' he told Clint thet he wanted his pay.

'We'll see about that, as soon as I git my shotgun,' says the hermit. Clint busted out the door and made for Green River and jumped in the river and was swimmin' across, and here comes the doctor and jumps in the river holding the shotgun between his teeth. The doc lifts hisself in the water, brings the shotgun to his shoulder and takes aim at Clint. Clint sees him and dives jest as the doc lets go, but Clint got half of the shot in his hind parts as he went under, but he made it to the shore with the doc a follerin' and a shootin' into every bush. Clint finally gits to a man's house and pays him to take him to the railroad, and he gits home."