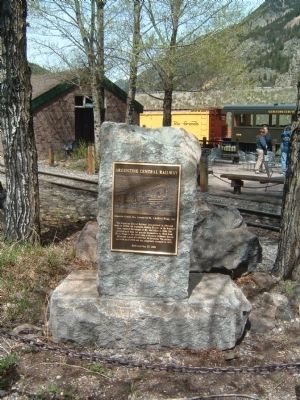 The Argentine Central Railway, incorporated in 1905 and built to service the Argentine Mining District in the Waldorf area, reached the summit of Mt. McClellan in 1906. The railroad used Shay (or geared) locomotives to climb from Silver Plume to Mt. McClellan, a distance of almost sixteen miles and a gain of 3,941 feet in elevation. The railway operated until 1918 and was completely scrapped in 1920.

Topics. This historical marker is listed in this topic list: Railroads & Streetcars. A significant historical date for this entry is May 27, 1920.

Other nearby markers. At least 8 other markers are within 2 miles of this marker, measured as the crow flies. Hamill House Museum (approx. 1½ miles away); Cornish House, 1892 (approx. 1.6 miles away); Teal Building, 1875 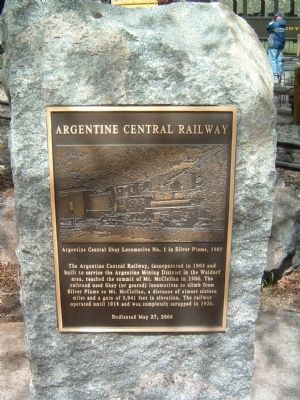