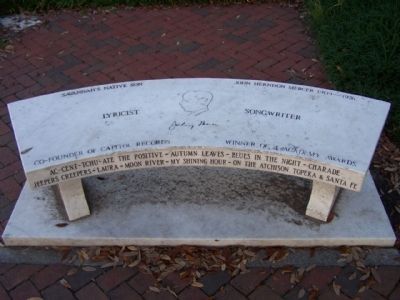 By Mike Stroud, 2008
1. John Herndon Mercer 1909 - 1976 Bench Marker
The second of two benches, 2003
Inscription.
John Herndon Mercer 1909 - 1976. Savannah's Native Son. ( Caricature ) , Johnny Mercer , Lyricist Songwriter , Co-founder of Capitol Records Winner of 4 Academy Awards , Front Rim reads; , Ac-cent-tchu-ates The Positive - Autumn Leaves - Blues In The Night - Charade - Jeepers Creepers - Laura - Moon River - My Shining Hour - On The Atchison Topeka and Santa Fe, Back Rim reads; , Come Rain Or Come Shine - The Days Of Wine and Roses - Hooray For Hollywood - In The Cool, Cool, Cool Of The Evening - One For My Baby - Something's Gotta Give - That Old Black Magic - You Must Have Been A Beautiful Baby . This historical marker was erected in 2003 by The Johnny Mercer Foundation. It is in Savannah in Chatham County Georgia

Back Rim reads;
Come Rain Or Come Shine - The Days Of Wine and Roses - Hooray For Hollywood - In The Cool, Cool, Cool Of The Evening - One For My Baby - Something's Gotta Give - That Old Black Magic - You Must Have Been A Beautiful Baby

Erected 2003 by The Johnny Mercer Foundation.

Location. 32° 4.786′ N, 81° 5.473′ W. Marker is in Savannah, Georgia, in Chatham County. Marker can be reached from Bull St. near E. Congress St., on the left when traveling north. SE corner of Johnson Square. Touch for map. Marker is in this post office area: Savannah GA 31401, United States of America. Touch for directions. 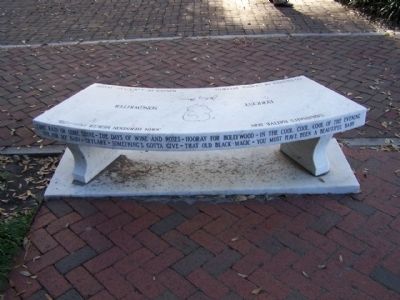 Regarding John Herndon Mercer 1909 - 1976. an easily overlooked corner of Johnson Square, sits a marble bench, a new and dramatic symbol of one of Savannah's favorite sons. He received nineteen Academy Award nominations

Related marker. Click here for another marker that is related to this marker. To better understand the relationship, study marker shown. 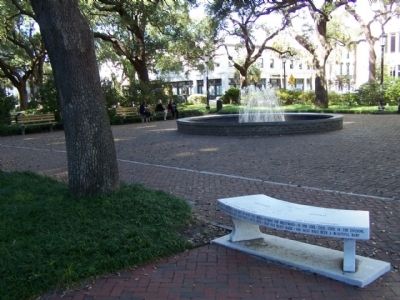 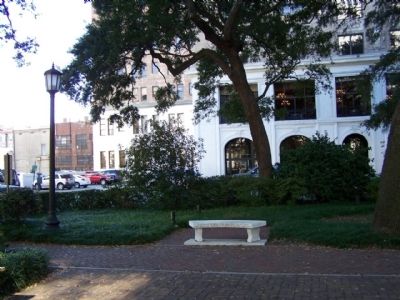 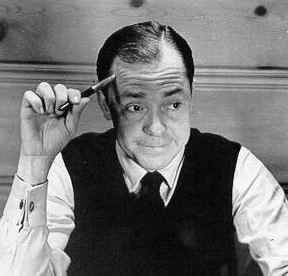 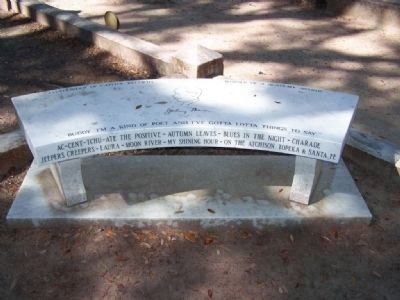 By Mike Stroud, February 17, 2008
6. The first John Herndon Mercer Bench near gravesite in Savannah's Bonaventure Cemetery, 2002
DePue Monument Company engraved two marble benches, which were fabricated from Italian Carrara marble. Carrara is a small Tuscan city approximately 100 miles northwest of Florence, known for the white and blue-gray marble quarried there. Carrara marble has been used since the days of ancient Rome, and was involved in the construction of the Pantheon and Trajan’s Column. Michelangelo’s David was also carved out of Carrara marble. First bench (for Bonaventure Cemetery) in May 2002 and the second (for Johnson Square) in June 2002 engravings and the Johnson Square bench was officially completed in February 2003 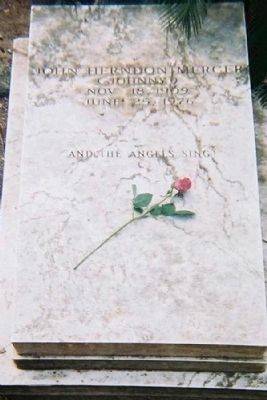